Further RCTs in this setting will be ethically challenging, underscoring the value of registry data like these, experts agreed. 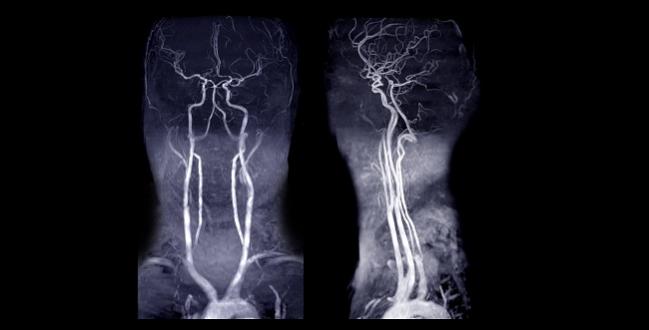 LOS ANGELES, CA—Patients with acute strokes caused by basilar-artery occlusions (BAOs) fare much better with the addition of modern endovascular thrombectomy than with medical therapy alone, a registry out of China suggests.

In the BASILAR study, patients who received thrombectomy within 24 hours of stroke onset were more likely to have an improvement in functional status according to modified Rankin Scale (mRS) scores at 90 days (common OR 3.07; 95% CI 2.07-4.54), according to Raul Nogueira, MD, PhD (Grady Memorial Hospital, Emory University School of Medicine, Atlanta, GA), speaking on behalf of the BASILAR study investigators.

A number of other clinical outcomes favored the addition of endovascular therapy as well, including the risk of death (46.2% vs 71.4%) and the proportion of patients who lacked severe disability (32.0% vs 9.3%), Nogueira reported last week at the International Stroke Conference. The findings were published simultaneously online in JAMA Neurology, with lead author Wenjie Zi, MD, PhD (Xinqiao Hospital, Chongqing, China).

Nogueira acknowledged that the analysis is limited by its nonrandomized nature, but that this is the largest prospective, case-control registry looking at the use of mechanical thrombectomy for patients with BAO strokes, which account for 5% to 10% of all strokes caused by large-vessel occlusions (LVOs).

“Sometimes in life it’s important that you acknowledge what is the best that can be done, and I think this is probably along those lines,” he said, adding that the equipoise needed to conduct a randomized controlled trial (RCT) of endovascular versus medical therapy alone in this setting has been lost in many parts of the world. He noted that results of the prematurely terminated BASICS trial, conducted in Europe and Brazil, will be reported at an upcoming medical meeting.

“I really hope that BASICS will add to the overall data favoring the use of thrombectomy in this devastating disease,” Nogueira said.

Strokes caused by BAOs carry particularly grim prognoses, with rates of severe disability and death reaching 68% to 78%, Nogueira reported. The randomized trials that cemented the place of mechanical thrombectomy in the treatment of patients with acute LVO strokes primarily included patients with blockages in the anterior circulation and excluded those with occlusions in the basilar artery, a fact reflected in practice guidelines. Thus, a BAO is an “orphan LVO,” Nogueira said.

There are some older observational studies suggesting that endovascular therapy can be of benefit in BAO stroke, and a few RCTs have been launched to explore the question. In addition to BASICS, there is BAOCHE, which is ongoing in China, and BEST. The latter, which was stopped after 131 of a planned 300 patients were randomized, failed to meet its primary endpoint, although per-protocol and as-treated analyses suggested that thrombectomy had a positive impact.

The primary endpoint was a shift analysis of mRS scores at 90 days. The positive shift seen with endovascular therapy in the main analysis was also observed in a propensity score-matched analysis and across nearly all predefined subgroups.

Other clinical outcomes favored thrombectomy, although the intervention was associated with a significantly higher rate of symptomatic intracerebral hemorrhage (7.1% vs 0.5%; P < 0.001).

American Stroke Association spokesperson Larry Goldstein, MD (University of Kentucky, Lexington), provided some context as to the importance of exploring treatment options in this setting. “Basilar occlusion can be devastating and lead to ‘locked-in syndrome,’ in which the patient is left conscious but unable to move aside from up and down eye movements. It is a critical issue,” he told TCTMD by email.

Practice guidelines state that mechanical thrombectomy “may be reasonable” in select patients with BAOs, Goldstein pointed out, and, “given the potential for devastating outcomes without reperfusion, thrombectomy is commonly done for these patients, in some cases up to 18 to 24 hours after symptom onset.”

It’s going to be ethically very, very difficult to do this as a trial now because none of us even remotely believe there’s equipoise for leaving an occluded basilar artery alone and using medical management. Jeremy Payne

He noted that because BASILAR was not a randomized trial, there is concern about residual confounding that could have affected the findings. “Nonetheless, the results might give additional support for [thrombectomy] and could affect the level of evidence for the current guideline recommendation, including the treatment window,” he said, adding that another RCT comparing endovascular therapy with medical treatment “would be ethically challenging.”

“It’s going to be ethically very, very difficult to do this as a trial now because none of us even remotely believe there’s equipoise for leaving an occluded basilar artery alone and using medical management,” he told TCTMD. Prior studies have shown that the chances of clearing a BAO with IV thrombolytics is less than 10%, he said. “I wouldn’t participate in a randomized controlled trial of basilar artery occlusion. I don’t think that would be right.”

The takeaway from this study is that “we’re justified in pursuing basilar arteries even though we don’t have the same level of randomized trial data that we have for the anterior circulation,” Payne said. It won’t change practice much because clinicians are already using thrombectomy in this patient population, but it’s helpful to see the magnitude of the benefits, he added.

Now, Payne said, physicians can tell patients who are about to undergo thrombectomy for a BAO, ‘Listen, there’s a lot of data now that really does support that what we’re about to do really improves your chances of having a good outcome. We’re not just hoping that it does.”

PCI-Related MIs Not Linked to Mortality at 1 Year: Onyx ONE