In patients with severe coronary artery disease—including triple-vessel or left main disease—coronary artery bypass grafting (CABG) leads to fewer adverse events within 1 year than percutaneous coronary intervention (PCI) with paclitaxel-eluting stents. The difference is driven largely by an increase in repeat revascularization in the PCI group, according to a paper in the March 5, 2009, issue of the New England Journal of Medicine.

Results from the SYNTAX (Synergy between PCI with Taxus and Cardiac Surgery) trial were previously presented at the European Society of Cardiology Congress 2008 and TCT 2008.

Patrick W. Serruys, MD, PhD, of Erasmus Medical Center (Rotterdam, The Netherlands), and colleagues employed an “all-comers” design that involved 3,075 consecutive patients with triple vessel or left main disease at 85 sites in 17 countries. Each patient was evaluated by a local interventional cardiologist and cardiac surgeon; those for whom either CABG or PCI were equally suitable were randomized to 1 of those 2 treatment options (897 received CABG and 903 received PCI with Taxus stents [Boston Scientific, Natick, MA]). The remaining patients who were only eligible for 1 treatment option were included in a separate nested registry (n = 1,275).

A non-inferiority comparison of PCI vs. CABG was performed based on the study’s primary endpoint, major adverse cardiac and cerebrovascular events (MACCE), which included death from any cause, stroke, MI, or repeat revascularization within 1 year of randomization. The MACCE rate was significantly higher after PCI than after CABG, but conflicting results were seen for secondary outcomes (table 1). 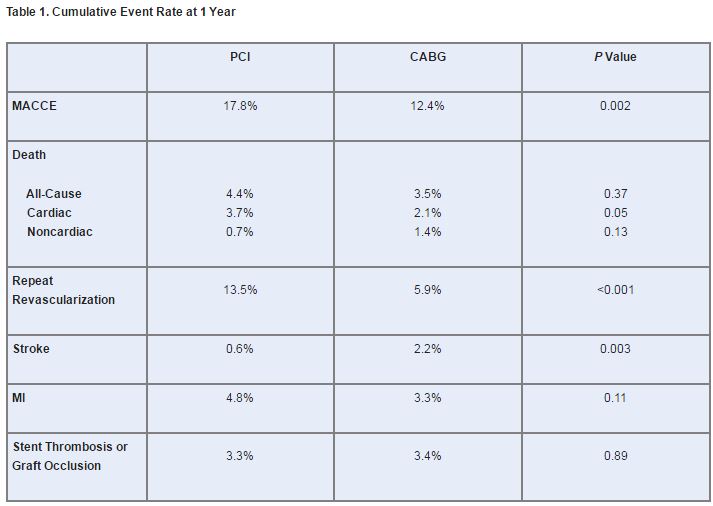 In addition, there was a significant interaction between SYNTAX score—a measure of disease complexity using angiographic and lesion characteristics—and treatment group (P = 0.01). In short, patients with low or intermediate scores had similar MACCE rates regardless of whether they underwent PCI or CABG, whereas patients with high scores did significantly worse with PCI. MACCE rates in CABG patients, on the other hand, remained steady regardless of their SYNTAX scores (table 2).

Based on these results, CABG should “remain the standard of care” for patients with triple-vessel and/or left main disease, the study authors conclude, noting elsewhere that the “risk of repeat revascularization after PCI needs to be balanced against the invasiveness of CABG and the risk of stroke.”

In the Eye of the Beholder

Gregg W. Stone, MD, of Columbia University Medical Center (New York, NY), told TCTMD in a telephone interview, “For SYNTAX, clearly beauty is in the eye of the beholder. I think that if one went into the trial thinking that surgery is the standard of care for left main and triple-vessel disease, then you will likely exit the trial believing the same.” On the other hand, he added “people who have an open mind and want to see just how good paclitaxel-eluting stents stack up to surgery” will get a different story.

Given that the composite endpoint of death, MI, and stroke was comparable between the 2 therapies, and considering the trade-offs between repeat revascularization and stroke, “angioplasty looks like a very good alternative that patients for the most part would prefer,” said Dr. Stone. He added that the equivalent rates of symptomatic graft occlusion and stent thrombosis should reassure those concerned with the safety of PCI.

Dr. Stone stressed that the current data only reflect 1-year follow-up, so it will be important to watch these patients during the 5-year follow-up that is planned for SYNTAX. In addition, further information will become available when results are published from the FREEDOM (Future Revascularization Evaluation in Patients with Diabetes Mellitus: Optimal Management of Multivessel Disease) trial, which will provide a head-on comparison of CABG and PCI in diabetic patients. The research is being sponsored by the National Heart, Lung, and Blood Institute and will address cost-effectiveness and quality-of-life issues as well as clinical endpoints.

SYNTAX is an argument for individualized treatment, Richard A. Lang, MD, and L. David Hillis, MD, both of the University of Texas Health Science Center (San Antonio, TX), assert in an editorial accompanying the paper. “All pertinent data, including that from diagnostic angiography, should be reviewed by a cardiac surgeon and interventional cardiologist to determine the likelihood of safe and effective revascularization with PCI and with CABG. To ensure this kind of thorough review, coronary revascularization should not be performed at the time of diagnostic angiography, thereby allowing the heart team sufficient time to review all the data, reach a consensus, and discuss the findings with the patient,” they write, adding that in SYNTAX the time from diagnostic angiography to revascularization averaged 6.9 days for PCI and 17.4 days for CABG.

Patients who are deemed suitable candidates for either PCI or CABG, Drs. Lang and Hillis write, should then be assigned a SYNTAX score. “The presence of complex anatomical features (assigned a high SYNTAX score) identifies patients with an increased risk of suboptimal outcome with PCI; they should be encouraged to undergo CABG,” they explain. “Conversely, patients with less complex coronary anatomical features (ie, a low SYNTAX score) should be presented with the advantages and disadvantages of each procedure and allowed to choose between them. Irrespective of which procedure is performed, the patient should receive optimal medical therapy involving an antiplatelet agent (or agents), a statin, and an ACE inhibitor, if appropriate.”

SYNTAX scores may be too complicated to use in daily practice, Dr. Stone countered, but are still based on a useful principle. “Basically, the anatomic complexity [observed when] interventionalists look at lesions does mean something in terms of long term freedom from clinical restenosis and repeat revascularization . . . . Most people will probably not be calculating an exact SYNTAX score, but they’ll be using common sense,” he said, noting that it is reassuring that the score does not seem to predict outcomes from surgery. “That makes sense, because if you bypass disease-affected areas it doesn’t really matter if it’s a simple blockage or a complex blockage.”

CABG patients were given significantly fewer cardiac-related medications during the year after their procedure than PCI patients, including aspirin, thienopyridine, any antiplatelet drug, warfarin derivatives, statins, ACE inhibitors, calcium-channel blockers, or angiotensin II-receptor antagonists. However, they were more likely to receive non-thienopyridine antiplatelet drugs, amiodarone, or H2-receptor blockers.