But only time will tell how the latest devices fare as TAVR shifts into lower-risk and younger patients. 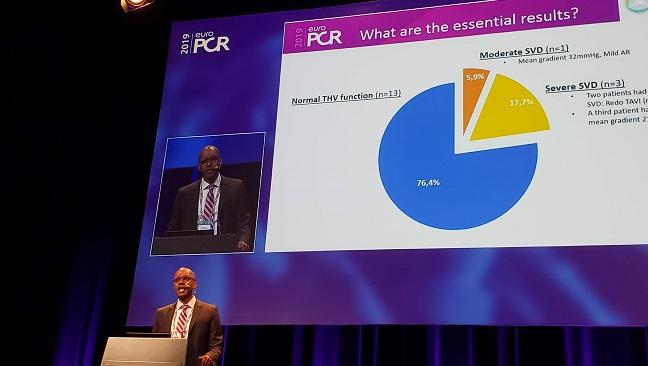 PARIS, France—It’s been 3 years since long-term data unveiled at the EuroPCR 2016 meeting first raised the specter of early transcatheter valve degeneration and prompted a flurry of research into the possibility that TAVR devices might degrade at a faster pace than expected. At this year’s meeting, however, two separate presentations offered some reassurances about the durability of TAVR through 8 and 10 years, respectively, at least when it comes to early-generation devices used in elderly, high-risk patients.

“The long-term performance of transcatheter heart valves is poorly understood,” Janarthanan Sathananthan, MBChB (St. Paul’s Hospital, Vancouver, Canada), said in a late-breaking session, adding that “of course, as TAVI expands to lower-risk patients, durability will become of increasing importance as we decide what therapy to offer for patients who are younger with increased longevity.”

These outcomes from TAVR’s early days must be kept in perspective, though. Sathananthan cautioned that the 10-year survivors represents a “very biased, selected population.” Both he and Luca Testa, MD, PhD (IRCCS Policlinico San Donato, Milan, Italy), who presented the 8-year data, emphasized that long-term follow-up is still far away for the more-recent TAVR era.

“The challenge with taking the data set we had, which is a very historical population, is that the devices that were implanted are really not reflective of contemporary devices,” Sathananthan told TCTMD, referring to it as a “snapshot.” Studies on surgical aortic valve replacement, he said, have also shown “that younger patients seem to wear out their valves quicker, because they’re more active potentially, and that may be reflected in the younger, low-risk TAVI patients in the future.”

Sathananthan acknowledged that “ultimately, in low-risk patients all valves will fail. I think the bigger unknown is: what do you do when they fail?” The best approach for repeat aortic valve replacement is still being debated, he added, noting that while the devices aren’t going to last forever, “the scrutiny for TAVR valves is much more than a lot of surgical valves were under. There certainly seems to be a signal that after 10 years these valves are functioning okay, but there are a lot of factors that may impact [durability].”

Ten Years Down the Road

Sathananthan and his colleagues set their sights on a rare subset: the 19 out of 287 patients (6.6%) who underwent TAVR at their center between 2005 and 2009 and then survived at least 10 years. The survival rate is surprisingly high, he commented, “as this TAVI was performed in an era where we’d be surprised if many of these patients survived a year.”

Mean age was 78 at the time of intervention and 85 at 10-year follow-up. Most patients (89.5%) received the Sapien valve and the rest were given the Cribier-Edwards valve (both Edwards Lifesciences). The researchers used the 2017 multisociety-produced European document to define structural valve deterioration (SVD) and valve failure based on recent echocardiograms done at least 8 years after TAVR.

Mean gradient overall dropped from 48 mm Hg before TAVR to 13 mm Hg immediately after, then didn’t worsen over follow-up (P = 0.62). Pre-TAVR, 26% had at least moderate AR; with treatment, that dropped to 0% and at 10 years the proportion was 5%.

Based on interviews with the patient or family members, quality of life also was favorable for most patients. More than four in every 10 patients (43.8%) could perform six out of six activities of daily living and one-quarter met three to five of those goals. Almost two-thirds did not require a mobility aid.

For Sathananthan, one surrogate way to explore valve performance is bench studies. “In terms of accelerated wear testing, current standards by industry require valves to be tested to 200 million cycles, or 5-year durability,” he said. His research group has tested the Sapien 3 transcatheter valve and the Magna Ease surgical valve (Edwards Lifesciences) for 1 billion cycles, or 25-year durability, and found them to have comparable durability.

In his presentation of 8-year data, Testa shared registry findings from the Clinical Service Project on 990 patients implanted with CoreValve (Medtronic) for severe aortic stenosis at one of eight Italian centers between June 2007 and December 2011. Mean age was 82 years, and 45.5% of patients were men. Notably, the mean STS predicted mortality was 9%, which serves as a reminder “that we started using this new technology in very high-risk patients,” Testa pointed out.

The analysis employed VARC criteria for all-cause mortality and paravalvular leak (PVL) and SVD based on the European definitions, modified such that postprocedural high mean gradient due to prosthesis-patient mismatch was not considered SVD. Echocardiography was performed after the procedure; at 1, 6, and 12 months; and annually thereafter.

Median follow-up was 4.4 years. By 8 years, 78.3% of the patients had died, though the majority of deaths were noncardiac. Mean gradient, which was 53 mm Hg before treatment, decreased to 10 mm Hg at discharge and then stayed consistent over the next 8 years (P = 0.495). The proportion of patients with 2+ PVL also stayed stable.

In the first 30 days after TAVR, six patients underwent reintervention. Beyond 30 days, there were 13 cases, nearly half of which were related to stenosis and none to thrombosis.

Rates of moderate and severe hemodynamic SVD (with death as competing risk) were 3.0% and 1.6%, respectively. Bioprosthetic valve failure occurred in 7.3% of patients. “These data show encouraging long-term hemodynamic performance beyond 5 years,” Testa concluded.

Alain Cribier, MD (Hôpital Charles Nicolle, Rouen, France), the session’s co-chair, also viewed the data as reassuring. That said, “we cannot predict from these results what the results would be in younger patients and especially in patients with bicuspid valves or [unique] features,” he observed.

Testa replied that it will be 5 to 10 years before such information is known about how next-generation TAVR performs. For now, he said, it’s impossible to know.

TAVR Durability: Some Reassurances From CoreValve Trials Out to 9 Years