There had been rumbles leading up to TCT that COAPT would be positive, but the response of the audience suggests people hadn’t expected this.

SAN DIEGO, CA—Sunday at TCT 2018 will be remembered as the day that COAPT results produced some whoops of surprise and spontaneous applause in the Main Arena. Full results of the trial are already live on TCTMD.

Though there is some preliminary evidence that catheter-based pulmonary artery denervation can improve hemodynamics in patients with pulmonary arterial hypertension, the approach has not been evaluated in a randomized trial. Until now. 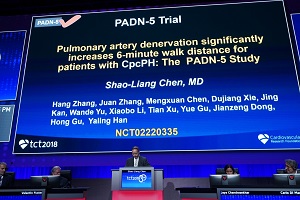 Denervation had a wide range of benefits through 6 months of follow-up, increasing 6-minute walk distance, reducing the occurrence of clinical worsening, and improving hemodynamics.

Ori Ben-Yehuda, MD (Cardiovascular Research Foundation, New York, NY), raised some questions about trial design, particularly use of open-label sildenafil in the sham-control group, and said more data are needed regarding pulmonary artery denervation, which is not approved for use in the United States or Europe.

Check back for full details from PADN-5.

One-third of patients who undergo valve-in-valve TAVR are dead at 3 years, but patients who survive have significant and durable improvements in valve hemodynamics, functional status, and quality of life, according to new data from the PARTNER II aortic valve-in-valve registry. 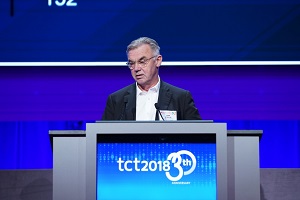 Presenting the results at TCT 2018, lead investigator John Webb, MD (St. Paul’s Hospital, Vancouver, Canada), said that valve-in-valve TAVR is a “viable alternative” for patients with failing bioprosthetic valves not eligible for reoperation. From a technical standpoint, not only are these procedures “somewhat easier” than implanting a native transcatheter aortic valve, Webb said there also are “dramatic” clinical benefits of the valve-in-valve TAVR procedure for degenerated surgical bioprostheses. At 3 years, the primary composite endpoint of all-cause mortality or stroke was 35.6%. Mortality increased from 12.1% at 1 year to 32.7% at 3 years. That the stroke rate did 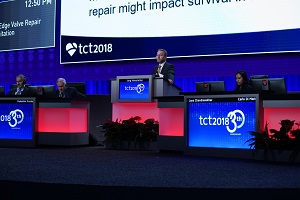 not accrue over time suggests there is no “late price” with the procedure, said Webb.

The TriValve registry is an international effort to collect data on interventional tricuspid valve repair for tricuspid regurgitation (TR).

Researchers led by Jörg Hausleiter, MD (Ludwig Maximilian University, Munich, Germany), tapped into the registry to evaluate the use of the MitraClip (Abbott Vascular) for edge-to-edge therapy. Nearly all patients had TR grade 3+ or 4+ at baseline, and the procedure was successful (reducing TR grade to 1+ or 2+) in 77%. Nine in every 10 patients had a reduction of at least one grade. Patients in whom the procedure was not successful had higher rates of mortality and rehospitalization through 1 year of follow-up.

Stay tuned for additional details and insights from the TriValve results later today.

An in-depth look at COAPT as well as trial slides are live on TCTMD. Briefly, the primary efficacy endpoint—all hospitalizations over 24 months—was significantly lower in the MitraClip versus the medical care group. Annualized rates of hospitalizations were 35.8% versus 67.9%, respectively (P < 0.001), yielding a number needed to treat of 3.1. Results in per-protocol, intention-to-treat, and as-treated analyses were very similar to the overall findings. Freedom from device complications in the MitraClip group was 96.6%. Perhaps most strikingly, 2-year mortality, a powered, prespecified secondary endpoint, was significantly lower among MitraClip patients: 29.1% versus 46.1% (HR 0.62; 95% CI 0.46-0.82), yielding a number needed to treat of 5.9.

I tried to capture as many views as possible to this complex trial and as many experts observed, the very same characteristics that made COAPT so positive are the things that may make it difficult to roll out in the real world. Read full COAPT results here. 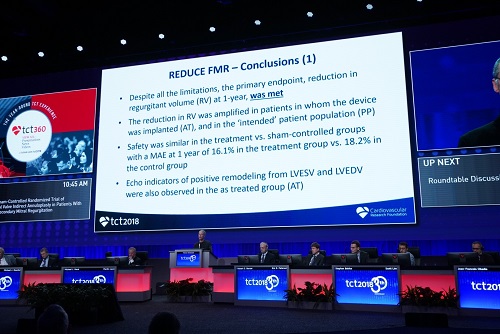 Also presented this morning, the sham-controlled REDUCE FMR trial randomized 120 heart failure patients with functional MR grade 2+ and dilated cardiomyopathy to treatment with the Carillon Mitral Contour System (Cardiac Dimensions) or a sham procedure. After 12 months, there was no difference in the cumulative major adverse event rates between the study and sham procedure arms (16.1% vs 18.2%). In the intention-to-treat analysis, those who were treated saw a 22% reduction in regurgitant volume compared to an 8% increase in those who were not (P = 0.03), and though the benefit was elevated for Carillon patients in the as-treated population (P = 0.02) it was not significant in the per-protocol analysis (P = 0.06). Positive remodeling with regard to LVESV and LVEDV also was observed on echocardiography in the as-treated group. 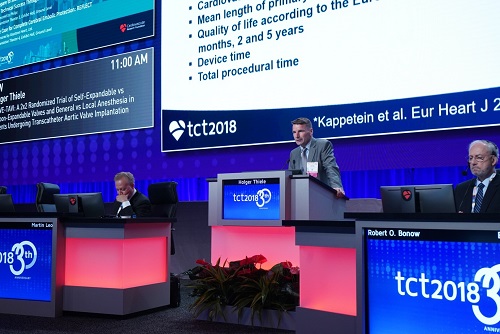 SOLVE-TAVI looked at two distinct questions within the TAVR field by comparing balloon-expanded versus self-expanding valves as well as general versus local anesthesia in a high-risk patient population. Holger Thiele, MD, who presented the results today, showed the trial’s comparable findings among 447 German patients randomized to TAVR with either the Evolut R (Medtronic) or Sapien 3 (Edwards Lifesciences) valves in terms of the combined primary endpoint of all-cause mortality, stroke, moderate/severe valve regurgitation, and permanent pacemaker implantation at 30 days (27.2% vs 26.1%; P = 0.02 for equivalence). Notably, there was a higher stroke rate among patients in the Sapien 3 arm (P = 0.01). There were also no differences in the combined primary outcome of all-cause mortality, stroke, MI, infection requiring antibiotics, and acute kidney injury at 30 days among patients randomized to general anesthesia or conscious sedation (25.5% vs 27.0%; P = 0.02 for equivalence).