Experts agree the findings suggest that aspirin can be dropped in practice 3 months after PCI in this high-risk patient cohort.

SAN FRANCISCO, CA (UPDATED)—Dropping aspirin after 3 months of dual antiplatelet therapy (DAPT) with ticagrelor (Brilinta, AstraZeneca) following PCI among high-risk patients is associated with lower rates of bleeding but no increased risk of death, MI, or stroke, according to results of the double-blind, placebo-controlled TWILIGHT trial.

“This is one of a series of trials [that are] now trying to peel back the antithrombotic regimen and it’s not surprising that giving only one drug causes less bleeding than two drugs,” said Robert Harrington, MD (Stanford University School of Medicine, CA), during a media briefing. It’s understanding the “ischemic trade-off, because that’s always the issue,” he cautioned.

TWILIGHT, which was simultaneously published in the New England Journal of Medicine, contrasts what was seen last year in GLOBAL LEADERS, where ticagrelor monotherapy after 1 month of DAPT was not associated with any benefit compared with continued DAPT over 2 years. A post hoc analysis of GLOBAL LEADERS, however, did suggest that perhaps patients undergoing complex PCI might benefit from dropping aspirin.

Because of the methodology used in TWILIGHT, it is probably the “best and most convincing” study in this space for two reasons, according to Marco Valgimigli, MD, PhD (Bern University Hospital, Switzerland). First, it’s the only study to randomize patients at the time when DAPT was either discontinued or continued, which reduces potentially biasing “noise,” and second, it had a double-blind design. TWILIGHT is “practice-changing,” he said in a media briefing.

Bleeding Benefit With No Ischemic Penalty

For the study, Mehran and colleagues enrolled 9,006 PCI patients from 187 sites across 11 countries who received ticagrelor 90 mg twice daily plus aspirin between July 2015 and December 2017. Three months later, 7,119 patients were randomized to either continue on aspirin or placebo. The majority of the study population underwent PCI for ACS (64.8%), 23.8% were female, and 36.8% had diabetes. Ticagrelor adherence at 1 year was similar in both the aspirin (85.9%) and placebo arms (87.1%).

“There’s no question that we are not powered for those rare events,” Mehran said. “It should be noted that all strokes were adjudicated by board-certified neurologists, so we probably captured more than you would have imagined.”

Additionally, she acknowledged that the study results cannot be generalized to all patients undergoing PCI. TWILIGHT had very specific inclusion and exclusion criteria, and the results are not applicable to patients receiving background therapy with other P2Y12 inhibitors nor to those who have events before 3 months or who are nonadherent to ticagrelor and aspirin before 3 months. “Importantly, a lower than expected incidence of the composite endpoint of death, MI, and stroke may have biased our results for this key secondary endpoint towards the null,” she added.

Interestingly, prespecified subgroup analyses showed consistent benefits across the board with regard to age, sex, diabetes status, geographic region, total stent length, and number of diseased vessels. ACS patients seemed to benefit more from ticagrelor monotherapy compared with those with stable disease—Mehran told TCTMD these results will be explored in more depth at the upcoming American Heart Association Scientific Sessions in November.

“We put stents in and we send the patients home and the majority of the questions we get in day-to-day practice [are related to] bleeding,” said Vijay Kunandian, MBBS (Newcastle University, England), in a media briefing. “You've shown a guideline-changing study where after 3 months it's okay for patients to be on single-agent [ticagrelor].”

Davide Capodanno, MD, PhD (University of Catania, Italy), agreed the results are practice-changing. “For me it’s a plus because there was a reduction in bleeding in patients who were not at high bleeding risk,” suggesting that the benefit might even be more pronounced in patients at higher levels of risk.

Ori Ben-Yehuda, MD (Cardiovascular Research Foundation, New York, NY), who moderated the discussion, said that another interpretation of TWILIGHT “is that it’s really showing the efficacy of P2Y12 inhibition and the prolonged DAPT, for example in the DAPT Study, is not because of DAPT but because of the prolongation of P2Y12. That’s the paradigm shift that we’re seeing here.”

In discussion following the main session, Gregg Stone, MD (Icahn School of Medicine at Mount Sinai), said “there are so many things you did right here,” especially randomizing patients at the 3-month time point. “We shouldn’t be making our decisions at time zero about what we're going to do at 3 months for our patients,” Stone continued. “We have to see how they do in the first 3 months—if they're tolerating medications, if they're having recurrent ischemic or hemorrhagic events, if they're able to be compliant on their medications—and so this is relevant to what happens when the patients come back at 3 months who are stable.”

Stone added that these results don’t give credence to only 1 month of DAPT, which has been floated as an attractive option in patients at high bleeding risk. “We saw the results of the GLOBAL LEADERS trial, which were a little less overwhelming. I think you have presented us with definitive results,” he said.

Deepak Bhatt, MD (Brigham and Women's Hospital, Boston, MA), who after GLOBAL LEADERS said he would not adopt a strategy of ticagrelor monotherapy unless TWILIGHT was positive, now said he would consider this strategy. “TWILIGHT will surely be viewed as a practice-changing study. Interventionalists want to use shorter obligate durations of DAPT after PCI, and this study supports 3 months,” he told TCTMD.

Going forward, Bhatt continued that “the challenge will be how to integrate these data with the wealth of studies supporting long-term DAPT in patients at low bleeding risk but high ischemic risk, not so much for the stent, but rather for the underlying atherothrombosis in the coronary, cerebral, and peripheral vasculature–most recently THEMIS and THEMIS-PCI, as well as prior studies such as PEGASUS and CHARISMA.”

Open questions remain regarding the preferred regimen for ticagrelor monotherapy after 3 months as well as whether generic daily clopidogrel monotherapy or even aspirin be sufficient in lower-risk patients, he said. “Should any de-escalation of DAPT occur at 3 months or at 1 month? And what about the COMPASS regimen of low-dose rivaroxaban plus aspirin, which reduced cardiovascular mortality in high-ischemic-risk CAD and PAD patients? We will need to see more data from a number of these recent studies to sort out which regimen is best for which type of patient. So, decision-making just got more complex but will hopefully be more individualized, with a role for each of the above strategies.”

In a separate presentation, part of the Thursday late-breaking clinical science session, Usman Baber, MD (Icahn School of Medicine at Mount Sinai), presented results of the TWILIGHT thrombogenicity substudy, which was planned and conducted concurrently with the main trial. 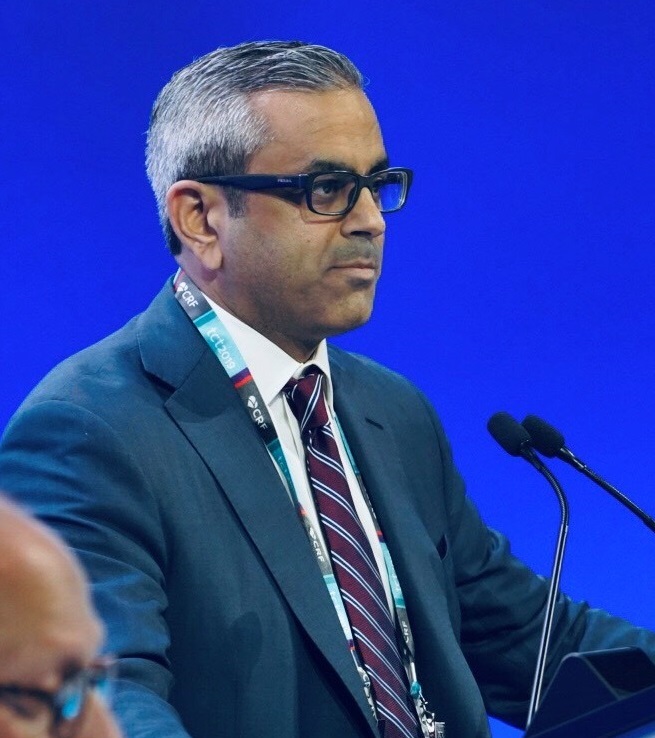 “We designed the substudy with the intent to provide some mechanistic and physiologic basis that would corroborate the anticipated findings from the overall clinical trial,” he told TCTMD. “[We thought] even if we were able to demonstrate noninferiority, we felt for clinical acceptance of getting rid of aspirin, it would also be important to have some mechanistic basis that in fact shows and illustrates that when you withdraw aspirin, you do not increase the validated markers of blood thrombogenicity.”

Baber and colleagues recruited 51 patients who were enrolled in TWILIGHT at their institution to undergo additional blood perfusion and platelet aggregation testing both at randomization and about 1 month after that. To assess their primary endpoint of platelet-dependent thrombus area at the postrandomization visit, the researchers used the Badimon perfusion chamber—a validated ex vivo model that generates thrombus under dynamic flow conditions of shear stress that mimic coronary artery disease. Platelet reactivity was measured using the Multiplate Analyzer (DiaPharma, West Chester, OH) using multiple agonists.

There were no differences in platelet reactivity using either adenosine diphosphate (P = 0.47) or thrombin receptor activator peptide 6 (P = 0.81), but the ticagrelor monotherapy arm had higher platelet aggregation using the agonists arachidonic acid (P = 0.02) and collagen (P = 0.03).

Baber argued that the substudy results together with the main findings support a change in practice. “The question of whether or not it is safe to withdraw aspirin in these kinds of patients I think is supported by two important observations,” he said. “One, the clinical trial where we showed noninferiority, and then two, this mechanistic substudy where we were actually able to show in fact by the removal of aspirin there was no increase in thrombus formation in the very same patients who were in the TWILIGHT trial. It's physiologic corroborative evidence from the exact same patients who were enrolled in the trial, and therefore it really supports the clinical conclusion that when you withdraw aspirin it does not appear to lead to more thrombotic events, at least while you maintain ticagrelor.”

Mehran added that the substudy “is incredibly important. . . . Everything corroborates, everything is going in the right direction.”

Acknowledging the practical challenges associated with performing a study like this, Harrington said in the media briefing that he likes these kind of mechanistic substudies that try to give insight into clinical findings. “Much of the clinical observations are in some ways a black box, and something happens and you can sort of make up the mechanism that you think might be contributing to it,” he said. “I also like mechanistic substudies that are embedded in a bigger study as opposed to done in parallel. I think that there's some power in that. . . . You really did demonstrate that aspirin plus ticagrelor mechanistically is different than ticagrelor alone. But then you showed mechanistically that it didn’t seem to matter on thrombus formation.”

Rationale for and Design of TWILIGHT and GLOBAL LEADERS: What I Expect the Findings to Be  But What Wont Surprise Me!