The research highlights the challenges of using radiofrequency IVUS to identify, and to potentially treat, patients with high-risk vulnerable plaques. 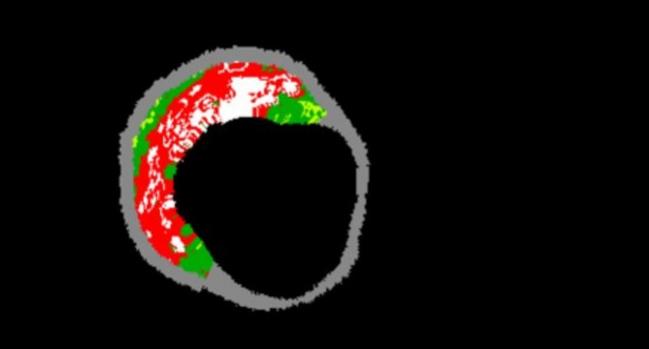 (UPDATED) Identifying components of coronary plaques that are more vulnerable to rupture has long been a holy grail of cardiovascular risk prediction, but two new studies using radiofrequency IVUS have come up empty-handed. Experts say it’s not yet clear whether the fault lies in the hypothesis that prognostic information or treatment decisions can be derived from plaque morphology, or in the imaging tools currently available for identifying vulnerable lesions.

In the first analysis, involving 581 patients scheduled for coronary angiography who underwent radiofrequency IVUS of one segment of a nonculprit coronary artery, evidence of a thin-cap fibroatheroma (TCFA) lesion alone, defined as a lesion with a necrotic core in direct contact with the lumen, was not associated with an increased risk of all-cause mortality, nonfatal ACS, or unplanned revascularization in long-term follow-up.

In the second study, which was an analysis of 968 statin-treated patients randomized to placebo or the PCSK9 inhibitor evolocumab (Repatha; Amgen) in the GLAGOV trial, investigators found that IVUS-derived plaque morphology provided no incremental information about the effects of the drug beyond the assessment of plaque burden. The addition of evolocumab on top of statin therapy induced a regression of plaque burden as assessed by percent atheroma volume and total atheroma volume, there were no significant changes in calcium, fibrous, fibrofatty, and necrotic volumes.

“The question continues with regard to plaque composition,” Nicholls told TCTMD. “The field accepts that plaques containing more lipid, inflammation, and necrotic material are important in terms of increasing the chance of rupture and clinical events. So the vulnerable plaque concept is real. The challenge is: do we have the right tools to find them? The jury is still out on that one. Our paper shows that aggressive lipid-lowering—here with PCSK9 inhibitors and previously with statins—associates with plaque calcification but no changes in ‘vulnerable’ features like necrotic material. Does that mean these features aren’t modified or that we are using the wrong tool? I suspect it’s more the tool.”

The vulnerable plaque concept is real. The challenge is: do we have the right tools to find them? The jury is still out on that one. Stephen Nicholls

Rishi Puri, MD (Cleveland Clinic, OH), who was involved in studying the effects of evolocumab on plaque composition, noted GLAGLOV was a positive trial and that the results line up with FOURIER, the large-scale cardiovascular outcomes study. “We had a regression in plaque and we had a reduction in events,” he said. “Does it mean the virtual histology [with IVUS] failed or is the virtual histology telling us something different? I don’t think the problem is with GLAGOV, the drug, or with grayscale IVUS and overall plaque burden.” Instead, he believes virtual histology IVUS is limited in its assessment of plaque composition.

For Gregg Stone, MD (NewYork-Presbyterian/Columbia University Irving Medical Center, New York, NY), who wrote an editorial along with Gary Mintz, MD (Cardiovascular Research Foundation, New York, NY), and Renu Virmani, MD (CVPath Institute, Gaithersburg, Maryland), the GLAGOV analysis shows that reductions in the necrotic core do not necessarily correlate with improved clinical outcomes. This phenomenon was also observed with darapladib, a drug that prevented the expansion of the necrotic core but did not reduce the risk of major adverse cardiovascular events.

“The necrotic core is one of the features of a radiofrequency IVUS-identified TCFA, but what these studies suggest is changing that parameter doesn’t necessarily correlate with improving prognosis in that patient,” Stone told TCTMD. “It may be the company that it keeps that’s more important. For example, it may be the fact that when you have a large necrotic core you also have a thin cap. If you reduce the necrotic core, but don’t thicken the cap, the patient is still at risk.”

Both studies were published online October 15, 2018, ahead of print in the Journal of the American College of Cardiology.

During a median follow-up of 4.7 years, 26.2% of patients had a major adverse cardiovascular event. In multivariate analysis, a lesion with a minimal lumen diameter ≤ 4.0 mm2 was associated with an increased risk of all-cause mortality, nonfatal ACS, or unplanned coronary revascularization (HR 1.49; 95% CI 1.07-2.08). The presence of a TCFA or a lesion with plaque burden ≥ 70% was not associated with an increased risk of adverse events. Results were similar when cardiac death was included as part of the composite endpoint instead of all-cause mortality.

Only when TCFA was combined with other IVUS-derived plaque characteristics, such as plaque burden and minimum lumen diameter, was it associated with long-term cardiovascular events. The researchers point out that their results contrast with the PROSPECT and VIVA studies, both of which showed that a TCFA lesion alone was associated with an increased risk of major adverse cardiovascular events.

To TCTMD, Puri said he remains a believer in the vulnerable plaque hypothesis. “The pathological data are quite compelling,” he said. “I think this is more about the imaging than the hypothesis.”

When imaging researchers attempt to characterize plaque composition in the same manner pathologists classify plaque on autopsy, such real-life virtual histology has been challenging, he said. “We’re of the opinion there are vulnerable plaques, and yes these clinical events are a focal manifestation of a systemic disease. But are we able to truly and serially identify focal pathology and have a really good imaging understanding of what these are, in the way pathologists can see ex vivo, I think the answer to that question today is I’m not sure.”

Why the Different Results Compared With PROSPECT?

Stone, Mintz, and Virmani agree that radiofrequency IVUS is limited as an imaging modality for the assessment of TCFA, but point out it was used successfully in PROSPECT. In that study, the presence of a TCFA was associated with a more than threefold increased risk of major adverse cardiovascular events at individual lesion sites.

For the editorialists, the absence of a link between TCFA lesions and cardiovascular events is likely attributable to numbers: in PROSPECT, they imaged three vessels rather than one, imaged significantly more lesions (724 vs 2,160 lesions), and imaged a longer length of the coronary artery (44.3 mm vs 206.7 mm).

That said, while lesion- and patient-level events are “invariably linked,” they note, the ATHEREREMO-IVUS study likely was underpowered to detect an association between the presence of TCFA lesions and patient-level major adverse cardiovascular events. In imaging studies, more patients are needed to detect statistical associations between lesion characteristics and patient-level (rather than lesion-level) events because the whole coronary tree cannot be imaged and the number of all lesions is greater than the number of patients, according to the editorialists.

“There are always fewer vulnerable patients than there are vulnerable plaques,” said Stone. In the ongoing PROSPECT II study, investigators have included approximately 900 patients to determine if vulnerable plaque detected with intracoronary near-infrared spectroscopy (NIRS) is predictive of coronary events, he said.

In addition to insufficient power at the patient level, Stone, like the researchers, noted that atherosclerosis is an ongoing process and that certain TCFA lesions may heal and others may not, thus influencing the association with future events. “The further away you get from the time of imaging, the less likely any specific individual plaque is going to cause plaque-related events or vulnerable patients-related events,” said Stone. “That’s because vulnerable plaques are dynamic and do come and go.”

Puri agreed, telling TCTMD that “these arteries are smarter than what we think” and that studies have shown there is a significant flux over time in the composition of coronary plaque.

“We don’t really know what these vulnerable plaques do day to day, month to month, or year to year,” he said. “And we don’t necessarily know what they do when we apply guideline-directed medical therapies, such as high-dose statins or PCSK9 inhibitors, which is the most means of lowering LDL cholesterol. Lowering LDL is the only validated approach, at this point in time, to lowering atherothrombotic risk.”

As for the spatial limitations of radiofrequency IVUS, Stone said the resolution of IVUS is insufficient to identify a thin fibrous cap and can also be inaccurate when differentiating necrotic core from calcium. “It’s not perfect,” he said. “The hope is that some of the new technologies, such as optical coherence tomography [OCT] and rear-infrared spectroscopy will be as or more predictive and easier to use to identify vulnerable plaques in patients.”

For Nicholls, these new data suggest that researchers still have work to do when it comes to imaging vulnerable plaques. “I think it tells us we have a long way to go,” said Nicholls. “There are other invasive tools such as OCT and NIRS which may ultimately perform better. However, we need more studies. In addition, I think most of us are interested in the ability of CT coronary angiography to provide this information, since it is noninvasive and can be applied to many more patients across the risk spectrum.”

COLOR: PCI of Lipid-Rich Plaque Not Associated With Increased Risk of Adverse Events