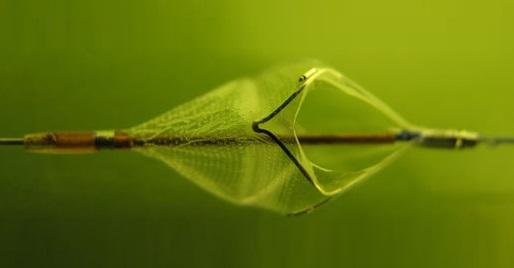 HOLLYWOOD, FL—A distal embolic protection device already approved by the US Food and Drug Administration (FDA) for use in carotid artery stenting can also be applied safely in patients undergoing lower-extremity atherectomy, according to data from the WISE LE trial.

Newly presented details at the International Symposium on Endovascular Therapy (ISET) 2018 show that the filter captured debris in all cases and particles larger than 1 mm in nearly one-third, demonstrating its clinical value in this setting, William A. Gray, MD (Main Line Health, Wynnewood, PA), told attendees.

If the Wirion device (Gardia Medical) gets the FDA’s signoff for embolic protection in lower-extremity atherectomy, it would face only one existing contender for that indication: SpiderFX (Medtronic), which must be paired with the TurboHawk atherectomy device (Medtronic). Yet WISE LE tested Wirion in combination with a range of atherectomy types, including directional, rotational, orbital, and laser, Gray said. Moreover, he pointed out, the filter can be used anywhere along the guidewire and vessel.

To TCTMD, Gray said that “based on the data, it should be cleared” by the FDA. “This was an interim look” at WISE LE, which was meant to enroll more patients, he explained. “But because it was so effective with such a good safety profile, . . . they were able to stop the trial.”

Michael R. Jaff, DO (Newton-Wellesley Hospital, Newton, MA), who was not involved in the research, commented to TCTMD that “there is definite interest” in embolic protection for the lower extremities.

Asked whether the strategy in general would prove effective, Jaff said “it’s tough to be fully convinced. But particularly in patients at high risk for distal embolization resulting in clinical deterioration, physicians are already starting to use [filters].” Currently, some operators are using the Emboshield NAV6 device (Abbott Vascular)—which is approved for use during carotid angioplasty and stenting—during revascularization of patients with critical limb ischemia, single-vessel runoff, or lesions where a significant thrombus component is suspected, he said.

What the Filters Capture

Of the 103 patients included in this report, 79.6% were being treated for superficial femoral artery disease. Two-thirds of lesions were de novo and the remainder were restenotic. Calcification was moderate in 39.6% and severe in 50.5%.

There were two MAEs (1.9%) in cases that used Wirion versus 10.6% in historical controls from the DEFINITIVE CA++ and DEFINITIVE LE studies of SpiderFX.

Histology analysis was performed on all filter-captured content. In the mix were fibrin-platelet aggregates, fibrous tissue, and filter nylon mesh, Gray said, as well as calcium deposits and cholesterol.

More than 20 particles were found in 43% of the filters, with 22% having debris of 1 to 2 mm and 9% with particles that exceeded 2 mm. “A normal vessel is in the 3-mm range,” Gray noted to TCTMD. With particles of 1 mm or more, “for a diseased vessel where there’s a stenosis, that could easily block that vessel,” he said.

Embolic Debris Captured by Filters in Three-Quarters of TAVR Patients