Yes, You Believe in Transplantation: But Could You Save My Life? 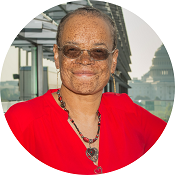 On a late spring day in May 2006, I was working in retail, unloading boxes from a truck. As a store manager I wouldn't ordinarily be engaged in this type of physical labor, but we were acutely short of workers on what was a very hot day. After about an hour of strenuous hauling, I felt like I’d pulled a muscle. I left the truck and went to my office, where I sat for 30 minutes at my desk with the fan blowing directly in my face. I took an aspirin while I waited to feel better, then left work early.

For the next 6 weeks I went back and forth to work with that nagging "pull" in my chest continuing to annoy me, until I finally decided it was not getting better. In the local emergency room after some tests and monitoring, I was told I had suffered a silent heart attack. It was a shock to me since I’d felt nothing but a little back pain. Later, after educating myself, I realized I’d had the classic signs of a heart attack that I had ignored.

In June 2006, I was placed in cardiac care in my local community and started cardiac rehab. I was admitted to the hospital about eight times over the next 2 years until June 2008, when my local medical team told me there was not much more they could do and referred me to the Montefiore Medical Center in the Bronx. I was monitored as an inpatient for 9 days, and at the end of my evaluation, my cardiologist, Jooyoung J. Shin, MD, told me she had good news and bad. The bad news was my heart was failing; the good news was she was going to place me on the heart transplant list.

For years I was in and out of the hospital, rapidly losing weight. By the spring of 2010 I had lost my appetitive along with 50 pounds—down to 95 pounds—frequently losing balance and falling over. In April 2010 I was placed in the CCU to begin what I knew would be the final wait, one way or the other, and I made peace with the fact that I might die soon but wouldn’t give up the fight. Three hearts became available, but my team turned down each of them: none was the perfect heart for me.

My time in the CCU had lots of tough twists and turns but outstanding medical care at every step. During my long wait, I became particularly attached to my physicians. Montefiore is a teaching hospital with lots of training staff coming and going. Among the many things I learned was that the best trainees and regulars were the ones who seemed to actively listen. This excludes what I called the “head bobbers” who were easily recognized, and as a patient, I can tell you their opinions were not as valued. The best physicians were the ones who really included me in their decisions and asked me questions, actively seeking my opinions and goals. So often I heard about “patient-centered medicine,” which can sometimes be bandied around like a cliche. True patient-centered medicine means including the patient in all decisions and really has no place for the clinician as God.

I had my “aha moment” somewhere about day 60, when I decided that if I lived, I would have a purpose. My mission would be to spread awareness about organ donation and heart health.

On July 16, 2010, after 2 years on the active waitlist and 78 days in the hospital, I had my heart transplant. Just 9 days after discharge, I got my first opportunity to fulfill my promise, when I was invited to speak to a community gathering for National Minority Organ Donor Awareness Week. I was so proud to sign up my first 20 donors that day.

My donor was active duty United States Coast Guard E3 Fireman Michael Bovill, age 23. Michael had lost his battle for life on July 15, 2010, after a motorcycle accident 5 days earlier. I received his heart on July 16. Less than a year later, I was contacted by a producer from the Oprah Winfrey Network, who asked me if I would be interested in sharing my story on her new show and in June 2011 we taped "Ask Oprah’s All-Stars." On that show, in a surprise segment, I was introduced to my entire donor family.

I made a pledge that day to Michael’s family that I would honor his gift and have now done hundreds of events as a transplant ambassador. My work for women’s heart health has taken me across America and allowed me to learn directly from clinicians, but I’ve also been proud to attend medical conferences as a patient advocate, where I’ve been able to teach health professionals what it’s like to be the patient in the bed.

I myself came from a family that believed in organ donation: my mother was a nurse in a neurology unit and in private practice for 35 years. But while it was always understood that we all believed in organ donation, I found out pretransplant that none of us actually was formally registered to donate. That spurred me to launch my crusade to sign others up to be donors, starting by asking everyone if they knew if they were donors, including my own physicians. Posttransplant I started asking clinicians first in my center and then at other medical facilities and was surprised how many were not.

I’ve kept up my questioning and to date, more than 10 years later, I am proud of the fact that I have been able to sign up nearly 12,000 new organ, eye, and tissue donors. I’ll ask the same question of you now: are you registered to donate an organ? It could save a life like mine.

Roxanne Watson is a heart transplant recipient, patient advocate, and a transplant ambassador for Donate Life, WomenHeart, and the American…