12:30 PM - Next Up: Interventional Late Breakers

Disappointing news to patients with critical limb ischemia (CLI) from the AD trial: the experimental drug JVS-100 has failed to enhance wound healing, at least at 3-month follow-up. The biologic therapy, paired here with revascularization, was meant to improve blood flow by encouraging the growth of smaller vessels near the skin’s surface, where wounds develop. 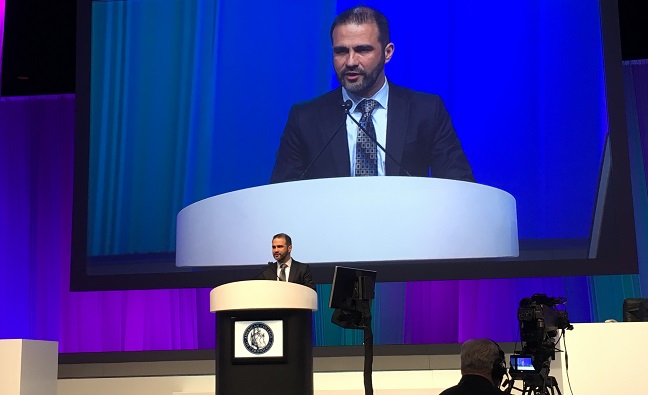 But in the STOP-PAD study, which enrolled 109 patients at 21 US centers, just one-quarter saw their wounds completely heal by 3 months after intervention, regardless of whether they’d been given JVS-100 or placebo. During that time frame, the major adverse limb event rate (major amputation, bypass, or balloon revascularization in the affected limb) was 14% with treatment and 9% with placebo. Patients are being tracked for 12 months. 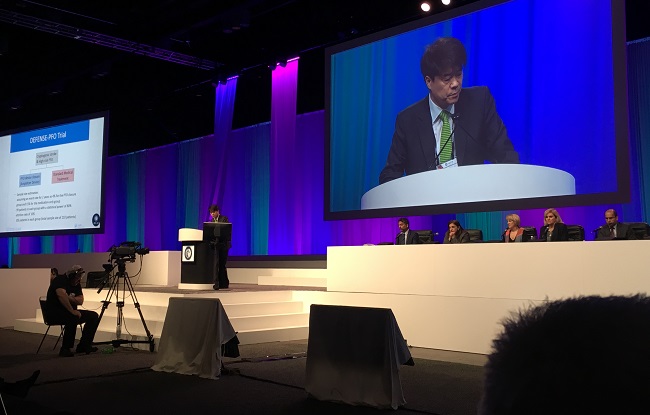 It wasn’t too long ago that the strategy of PFO-closure for stroke had lost most of its defenders. Fast forward to DEFENSE-PFO, which was busy enrolling when the extended follow-up of REDUCE, CLOSE, and RESPECT—most notably in combination—put PFO closure back on the table. Presented by Jae Kwan Song, MD (Asan Medical Center, Seoul, South Korea), DEFENSE-PFO was designed to address whether careful patient selection using specific echo parameters would show that closure is superior to medication alone.

The trial enrolled 120 survivors of cryptogenic stroke at two centers in South Korea. All patients had a high-risk PFO, defined as either a PFO of at least 2 millimeters in diameter or an atrial septal aneurysm or hypermobility. In patients that met these criteria, those treated with PFO closure had no primary outcome events over 2 years. By contrast, the rate of event-free survival (no stroke, vascular death, or TIMI major bleeding) was 87.1% in the medication-only arm (log-rank P valve = 0.013).

Next up was SMART-DATE, looking at 2,712 patients with ACS amenable to PCI and comparing 12-month DAPT to 6 months, with a primary endpoint of MACCE at 18 months after implantation of everolimus-, zotarolimus-, or biolimus-eluting stents. Six-month DAPT met the prespecified criteria for noninferiority as compared with 12-month DAPT for the primary composite endpoint. In secondary findings, however, MI was more common in the 6-month versus the 12-month DAPT group, Hyeon Cheol Gwon, MD (Samsung Medical Center, Seoul, South Korea), showed here. “The increase MI risk with 6-month DATP prevents us from concluding that short-term DAPT is safe in patients undergoing PCI,” he concluded. 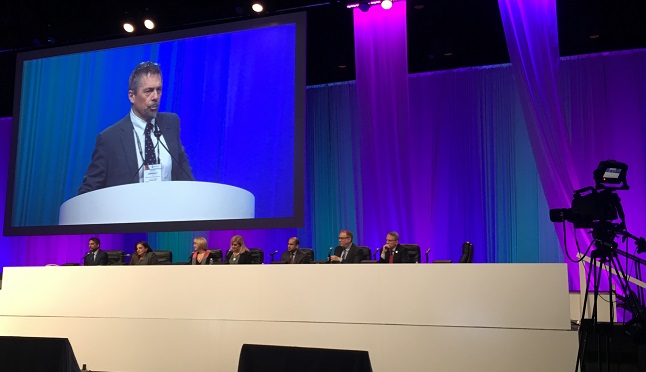 The fourth and final late breaker in this block stepped back slightly from coronary and structural heart interventions. This was the latest update from ANNEXA-4. Remember, preliminary results in the first 67 patients were released at ESC 2017, but European and US regulators have not yet made up their minds to approve andexanet alfa, which was developed as an “antidote” to factor Xa-associated major bleeding with the non–vitamin K antagonist oral anticoagulants.

9:00 AM - It’s a busy morning for the TCTMD team at the American College of Cardiology 2018 Scientific Session. Here’s some top-line results from the late breakers. Check back for full details on these studies throughout the day and in the days to come. 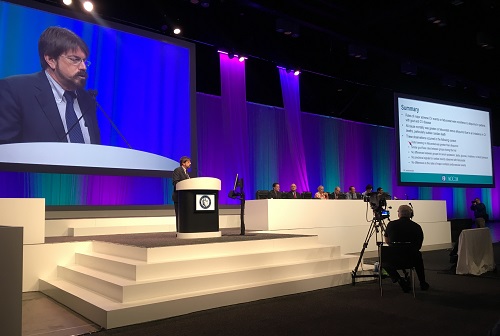 In the CARES trial, investigators led by William White, MD (University of Connecticut School of Medicine, Farmington), found that febuxostat, a drug approved for the treatment of gout nearly a decade ago, significantly increases the risk of all-cause death compared with allopurinol, although the risk of the trial’s composite primary endpoint—fatal and nonfatal cardiovascular events—was no higher. ““This finding was entirely unexpected, and we’re at a loss at this time to explain why this finding was seen,” White commented in a press release. 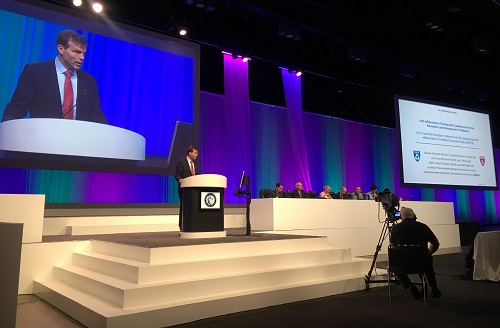 Investigators for one of the most talked about trials of 2017 have taken a closer look at new diabetes in CANTOS. The hope was that the anti-inflammatory canakinumab, which significantly reduced the risk of MACE in post-MI patients with elevated high-sensitivity C-reactive protein, might also have an impact on diabetes, also believed to involve inflammatory pathogenesis. Alas, as Brendan Everett, MD (Brigham and Women’s Hospital, Boston, MA), showed here, while canakinumab appeared to help lower hbA1c, this did not prevent subjects with prediabetes from progressing to diabetes.

On a happier note, canakinumab appeared to be equally effective at preventing CV events in patients with type 2 diabetes who are at high risk for cardiovascular complications, Everett noted. 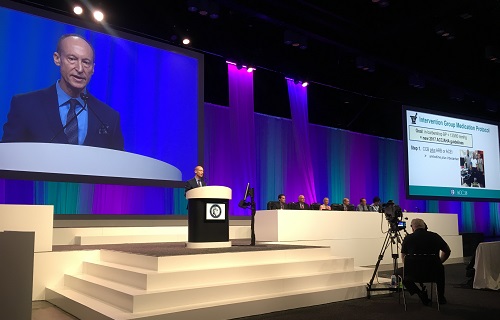 In a poignant moment, Victor dedicated the study presentation to his co-author Anthony Reid, MD, who passed away as the study was wrapping up.

Fantastic example of taking the treatment to the patient. Major impact on BP in black US men, having primary care in trusted community members (barbershops) where 'patients' frequent. Really worth reading and thoughts on what we could consider in the UKproactive health promotion pic.twitter.com/RbGsBEA7pb 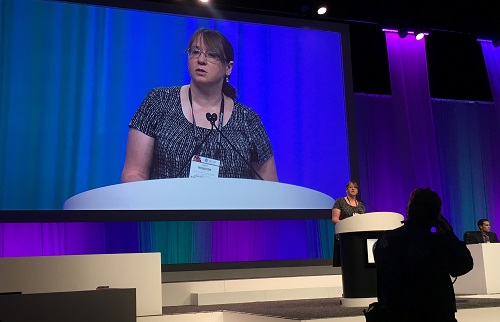 Sticking with blood pressure, there’s more evidence that low-dose triple therapy, combined in a single pill, is associated with better BP lowering than standard care. According to Ruth Webster, MBBS (The George Institute for Global Health at the University of New South Wales in Sydney, Australia), who presented the TRIUMPH trial here, Sri Lankan patients randomized to the combo pill (telmisartan 20 mg, amlodipine 2.5 mg, and chlorthalidone 12.5 mg) achieved a mean change in systolic BP from baseline of -29.1 mm Hg as compared with -20.3 mm Hg in the control group (P < 0.001). Mean change in diastolic BP for each group was -13.9 and -9.3, respectively (P < 0.001). Side effects warranting a therapy change were equivalent between groups. Low- and middle-income countries have the most “urgent need” for swift implementation and scale-up, Webster concluded, adding that high-income countries, including the United States where compliance is an important issue, could also benefit from such an approach. 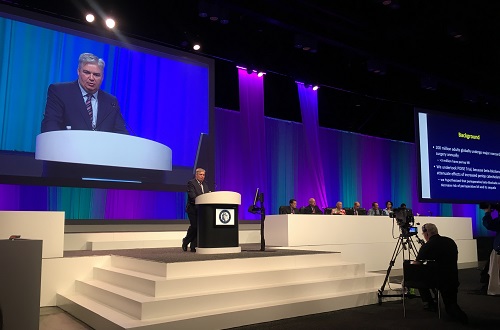 In the final trial of the 8 AM late-breaking session, PJ Devereaux, MD, PhD (Population Health Research Institute, Hamilton, Canada, presented 1-year results from POISE. Yes, this is the much-delayed follow-up from 30-day results first unveiled in 2008 showing that perioperative beta-blockers in patients undergoing noncardiac surgery appeared to reduce the risk of MI, but also to up the risk of stroke or death. As Devereaux showed here, however, the longer-term outcomes are also worth notice. At 1 year, patients randomized to the metoprolol group remained significantly more likely to experience stroke or death than patients originally randomized to placebo.

Poise-2 long term results: Beneficial effects of CR metoprolol in pts undergoing non cardiac surgery offset by hivher mortality and stroke. Incomplete data due to problems in Canada (Would they have changed results? I don't think so. @rladeiraslopes pic.twitter.com/xuHLSJecfc