Sunday morning’s late breakers were dominated by antiplatelet studies in ACS patients, plus a study of dabigatran in a new setting.

The second late-breaking clinical trial session of the American College of Cardiology 2018 Scientific Session must have been scheduled expressly for the bright-eyed/bushy-tailed or for the antiplatelet enthusiasts (these Venn diagrams no doubt overlap). 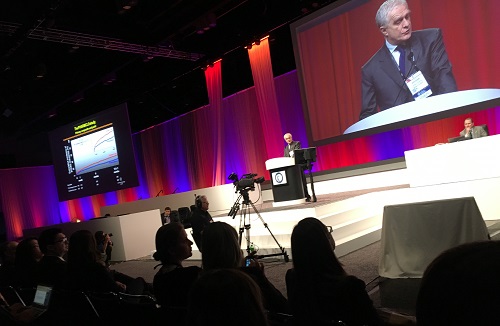 Kicking things off at 8 AM Daylight Saving Time (read: 7 AM for the body clock) was Diego Ardissino, MD (Azienda Ospedaliero-Unìversitaria di Parma, Italy), presenting the PHARMCLO study. This was an Italian trial of 888 patients hospitalized for STEMI or NSTEMI who were randomized to genotype-guided antiplatelet therapy or to usual care.

“The implementation of multiple genotyping to guide the antiplatelet therapy in ACS is feasible across different institutions,” Ardissino concluded. “A more personalized approach to the selection of antiplatelet therapy may lead to a clinically meaningful reduction in ischemic and bleeding complications.”

PHARMCLO results impressive but early termination after ~¼ of enrollment will leave many ?s unanswered. #ACC18

Of note the trial was originally designed to be far larger, but was ultimately capped at 888, for regulatory reasons.

ARTEMIS enrolled 11,001 patients at 301 US hospitals, testing the hypothesis that patients who received more potent P2Y12 inhibitors at the same cost as generic clopidogrel would be more likely to comply with 1 year of therapy. This, in turn, might lead to better clinical outcomes. 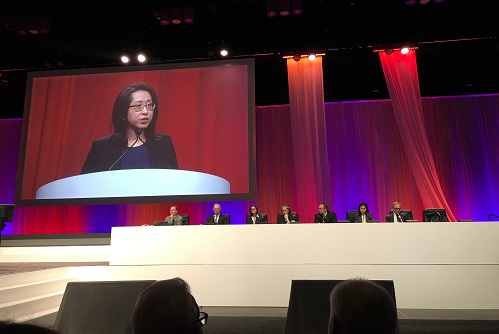 As Tracy Wang, MD (Duke University, Durham, NC), showed this morning, when patient co-payments were reduced, physicians were more likely to prescribe ticagrelor over clopidogrel, a pattern that was reversed in the non-co-payment/usual care arm. Moreover, patients were more likely to persist with treatment. Despite this increase in evidence-based treatment, however,clinical outcomes were no different between groups.

Ticagrelor and clopidogrel both had starring roles in the third late-breaking trial in this batch. TREAT looked at outcomes with these two agents among ACS-STE patients first treated with thrombolysis. As Otavio Berwanger, MD (São Paulo Cardiac Hospital, Brazil), reminded his audience, immediate transfer for PCI is not a reality in many parts of the world. No large trial, however, has looked at the question of whether ticagrelor in STEMI makes sense when fibrinolytics are used first. 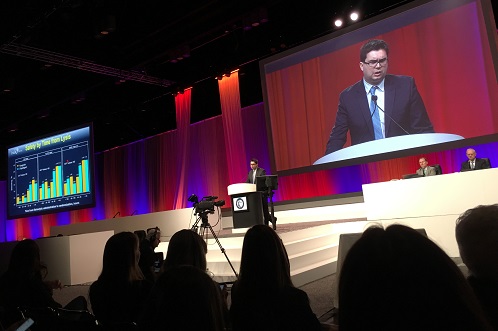 In this international study, almost 3,800 patients with STEMI treated with fibrinolytics were randomized to early ticagrelor (180 mg) followed by 90 mg twice daily for 12 months or to 300 mg of clopidogrel as early as possible followed by 75 mg/day for 12 months. Reporting 30-day outcomes here, Berwanger and colleagues found that ticagrelor was noninferior to clopidogrel for TIMI major bleeding, with no difference in ischemic events. Minor bleeding, however, was increased with ticagrelor.

“For patients who may be resistant to clopidogrel, or for those in whom it may be desirable to use the more potent drug, at least from our results doctors can know it is safe to do so,” Berwanger said in a press statement. “However, we will have to wait until next year to assess efficacy.”

The fourth study in today’s early morning late breakers broke from the pack: this was the MANAGE study testing dabigatran as a means of preventing myocardial injury after noncardiac surgery (MINS)—something that effects more than 8 million adults worldwide each year, according to PJ Devereaux, MD (Population Health Research Institute, Hamilton, Canada). 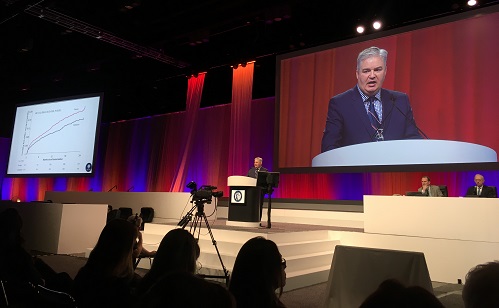 In MANAGE, 1,754 patients were randomized to dabigatran or placebo, with a secondary randomization to the proton pump inhibitor omeprazole or placebo. At 16 months, patients who developed MINS and were taking dabigatran had a lower rate of vascular complications than patients randomized to placebo. Omeprazole had no significant effect on dabigatran in the primary safety analysis.

The final study in this block was the only one to come up empty-handed. This was the 4,200-patient SECURE-PCI trial, which sought to carve out a role for an atorvastatin loading dose in reducing the risk of 30-day MACE among patients with ACS and a planned invasive strategy. No such luck for the overall trial. But in secondary analysis, investigators led once again by Otavio Berwanger, MD, found a significant reduction in cumulative MACE among patients who ultimately went on to have PCI as compared with those who didn’t. “These findings do not support the routine use of loading doses of atorvastatin in patients with ACS and intended invasive management,” Berwanger concluded. “However, among patients undergoing PCI, loading doses of atorvastatin seem to improve clinical procedural outcomes and might be an attractive treatment strategy for patients with acute coronary syndromes.”