With a cutoff of Hb ≤ 8 g/dL as the trigger for transfusion, a restrictive strategy was safe and cost-effective. 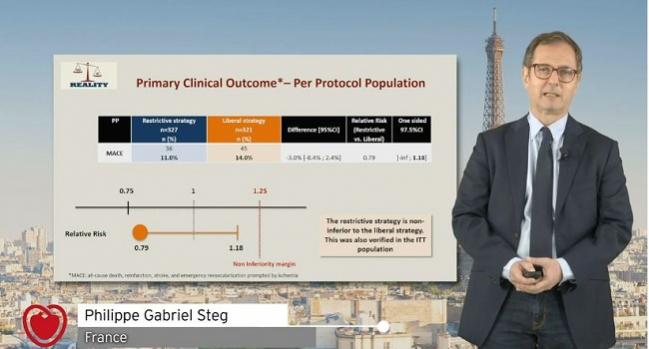 (UPDATED) Good news for patients with acute MI and anemia: it’s just as safe to give red blood cell transfusions only to those with low hemoglobin (Hb) as it is to give them more liberally, according to the REALITY trial.

“Blood is a precious resource, and transfusion is costly, logistically cumbersome, and has side effects,” investigator P. Gabriel Steg, MD (Hôpital Bichat, Paris, France), told the media in a press briefing. He presented his results from the randomized REALITY trial today during the final Hot Line session of the virtual European Society of Cardiology (ESC) Congress 2020.

Although anemia is common among MI patients—affecting approximately 5% to 10% of patients—“there is uncertainty as to which transfusion strategy is best in this population,” Steg said. Randomized controlled trials have compared strategies in the surgical setting and in patients with GI bleeding, but these excluded acute MI. Small pilot trials in this population “have yielded conflicting results,” he added.

The publicly-funded REALITY trial, conducted in France and Spain, enrolled 630 patients with acute MI who had Hb levels between 7 and 10 g/dL at any time during hospitalization. They randomly assigned these individuals to be treated according to one of two strategies for red blood cell (RBC) transfusion:

These strategies were maintained until either discharge or 30 days, whichever happened first. Transfusion was allowed if patients experienced massive overt active bleeding, had a presumed important fall in hemoglobin without time to wait for Hb dosage, or developed shock.

Everything is going in the right direction. The only lingering question, in my opinion, is [if] the restrictive strategy is not only noninferior but superior clinically to the liberal strategy. P. Gabriel Steg

At admission and randomization, Hb levels were similar between the two groups. The nadir for Hb during the hospital stay was lower among patients treated according to the restrictive strategy compared with the liberal strategy (8.3 ± 0.9 vs 8.8 ± 0.9 g/dL), and the restrictive group continued to show a lower level at discharge (9.7 ± 1.0 vs 11.1 ± 1.4 g/dL; P < 0.0001 for both).

Under the restrictive approach, 35.7% of patients received at least at least one RBC transfusion, compared with 86.7% with the liberal approach. While the mean number of units transfused per patient was nearly identical (2.9 vs 2.8) between the two groups, the more-conservative strategy saved a total of 414 RBC units overall.

At 30-day follow-up, the restrictive strategy was noninferior to the liberal for the primary endpoint of MACE (death, reinfarction, stroke, and emergency revascularization prompted by ischemia), with rates of 11.0% vs 14.0%, respectively, in a per-protocol analysis. An intention-to-treat analysis came to the same conclusion, Steg said.

Thirty-day costs trended lower with a more-conservative approach, amounting to an absolute difference of € 1,500. A cost-effectiveness analysis showed that the restrictive strategy had an 84% likelihood of being dominant.

“These observations support the use of the restrictive strategy,” Steg concluded.

The findings were consistent irrespective of baseline Hb, bleeding events, chronic anemia, or comorbid cancer, he said. “We believe that for patients who have no cardiogenic shock, who don’t have massive or life-threatening bleeding, and who have a hemoglobin value between 7 and 10, the results are broadly applicable.”

Marco Roffi, MD (University Hospital of Geneva, Switzerland), who discussed the REALITY results after Steg’s presentation, admitted to what he jokingly called a “disclosure.”

“I really love the REALITY trial, because it aimed to provide a solution for a very important, practical clinical dilemma, namely whether or not you should transfuse any patient presenting with myocardial infarction,” he said, an especially relevant question given the need to conserve blood.

There are concerns, said Roffi, that transfusion could carry harm by causing platelet reactivity to increase and trigger ischemic events. Yet the 2017 ESC guidelines for STEMI don’t address this issue, he observed, while the newly released 2020 ESC guidelines for NSTE ACS make no formal recommendation but say: “Based on inconsistent study results and the lack of adequately powered RCTs, a restrictive policy of transfusion in anemic patients may be considered.”

Roffi asserted that REALITY means clinicians can “comfortably refrain” from a more-liberal approach to transfusion. As of today, he suggested, the guidelines should be updated to advise that a restrictive strategy “should be considered.”

Asked by TCTMD why operators would choose not to go with a restrictive approach, Steg said: “Really, there is no downside. As you saw, clinically it’s noninferior, erring on the side of superiority but not quite meeting superiority. From the safety standpoint there are only benefits, although we have to be careful because the number of events is small and the statistical testing is affected by multiplicity.”

The possibility of saving blood is particularly appealing, stressed Steg, who pointed out that the restrictive approach reduced the RBC units used by 55%. “That blood can be used in patients who deserve it more,” he said. Moreover, it’s saving money.

“Everything is going in the right direction. The only lingering question, in my opinion, is [if] the restrictive strategy is not only noninferior but superior, clinically, to the liberal strategy,” Steg commented. “That question is being addressed by a large ongoing randomized trial called MINT, which is run by the [US National Institutes of Health] in the United States but actually enrolls patients internationally.” That study is set to include 3,500 people.

Speaking to the press, he did, however, point out that there are many factors beyond hemoglobin levels that inform decisions on RBC transfusion in patients with anemia: among them, the patients’ tolerance of anemia, tachycardia, preexisting anemia, active bleeding, intensity of antithrombotic therapy, and prior revascularization. “I think that we should be careful in not overextending the results of this randomized trial beyond the question that was tested,” he cautioned, such as by rethinking what constitutes a dangerous degree of anemia.

Dapagliflozin Wins in Patients With CKD