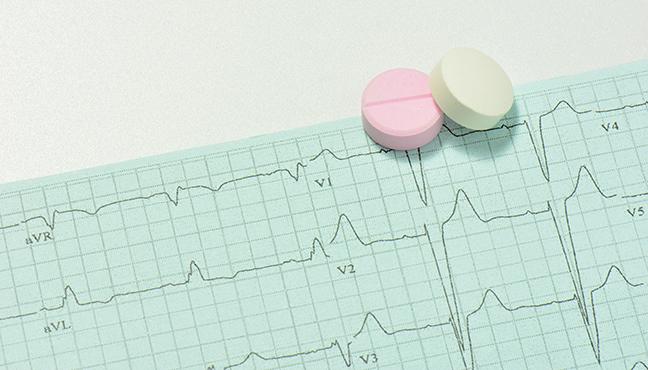 Poor responders to clopidogrel, identified by platelet reactivity testing, are more likely to develop stent thrombosis and to die within 2 years of undergoing PCI even when taking dual antiplatelet therapy (DAPT), a subanalysis of the ADAPT-DES study confirms.

But in an intriguing new finding, the established link between high platelet reactivity and stent thrombosis appears to be strongest in the first year, but with no significant association seen between years 1 and 2. Moreover, patients found to be hyporesponsive to aspirin, and who took only aspirin in year 2, saw no increase in adverse outcomes over the study period.

The new findings, published in the August 2017 issue of JACC: Cardiovascular Interventions, help fill in some details for a long-running discussion over exactly how long to continue dual antiplatelet therapy and the relative safety of switching to aspirin monotherapy in patients who received drug-eluting stents.

Even with the introduction of the DAPT Score in 2015—which includes several factors designed to pinpoint patients who would benefit from extended thienopyridine treatment, as well as identify those who might be harmed—much uncertainty remains. Those who don’t respond to clopidogrel, not surprisingly, have been shown to be at especially high risk for stent thrombosis and MI but at a lower risk for bleeding, a pattern corroborated in the 1-year results from ADAPT-DES.

Today, awareness of the high-risk population of patients with high platelet reactivity on clopidogrel, “and how to identify them, is key,” said Dominick J. Angiolillo, MD, PhD (University of Florida College of Medicine-Jacksonville), who was not involved with the study, in an email to TCTMD. “These results emphasize the need for more aggressive secondary prevention therapy in these patients. The answer is not only looking at antiplatelet drug regimens, but also at other treatment options affecting other pathways. New strategies focusing on coagulation factors, lipids, inflammation, among others, are currently ongoing and may represent potential treatment options.”

In the original study, 8,582 patients enrolled between 2008 and 2010 were given DAPT for 1 year, followed by aspirin monotherapy or continued DAPT at their physician’s discretion. All patients also underwent platelet reactivity testing at baseline. For the current analysis, investigators looked at event rates out to 2 years among the 46.4% of patients who were kept on DAPT (aspirin plus clopidogrel) for the entire period as well as patients treated with aspirin only.

Of note, as compared with patients switched to aspirin only after the first year, patients kept on DAPT for 2 years tended to be higher risk with more diabetes, hyperlipidemia, and prior cardiac disease.

Speaking with TCTMD, lead author Thomas Stuckey, MD (LeBauer Cardiovascular Research Foundation/Cone Health, Greensboro, NC), stressed the importance of these insights. “The 2-year results are unique from the 1-year results in that they reflect an individual provider strategy after 1 year of standardized treatment.” As such, he continued, “the results confirm the findings at 1 year, but provide some unique perspective related to an individual provider strategy after 1 year.”

But in an observation that may prove reassuring to physicians who elect to switch patients to aspirin monotherapy, these patients had very low rates of stent thrombosis (0.3%) and none of these events occurred in patients who had aspirin hyporesponsiveness at baseline. There were also no relationships seen between aspirin hyporesponsiveness and MI, clinically relevant bleeding, or all-cause mortality.

‘Ammunition’ for the DAPT Score

Stuckey said that none of their results were particularly surprising given that patients maintained on DAPT for 2 years “represented a higher-risk subgroup.” But these data support “the concept of a DAPT scoring system for selection of patients for continued dual antiplatelet therapy,” he suggested.

As for which one in particular, the DAPT Score, derived from the trial of the same name, “might be a reasonable approach,” Stuckey said, but it has yet to be subsequently tested in a randomized fashion. Unfortunately, a study like that is “not likely to happen just because of the sheer cost,” he predicted. “The funding of this is a challenge, and the stents keep getting better.”

This analysis, however, “provides a little bit of ammunition to suggest that [the DAPT Score] in fact might have some validity, because these patients after 1 year were selected by their individual providers. And while the selection of patients was not directed by the study, the comparison of the two patient populations suggested that the high-risk patients are the ones that were indeed treated with continued antiplatelet therapy,” he noted.

Still, “ADAPT-DES is the largest study to address this question with a strong methodology,” and the 2-year results “strongly reaffirm” other studies, they say.

“We tend to get polarized when we see results of DAPT or ADAPT, but the answers are not the same for every patient,” Neal Kleiman, MD (Houston Methodist DeBakey Heart and Vascular Institute, TX), who was not involved with the study, told TCTMD. “The truth is it's silly to say ‘I won’t treat any patient for more than a year’ [or] to be too rigid about saying ‘Everybody's got to go 30 months or longer.’”

We tend to get polarized when we see results of DAPT or ADAPT, but the answers are not the same for every patient. Neal Kleiman

People still “have pissing contests” about who can shorten DAPT duration the most, and most of that is uncalled for, he said. “It just shows when you get into the [time] range where the events are fairly low frequency and there’s probably some effect of clopidogrel even if it’s less than ideal in clopidogrel-resistant patients, it's going to be hard to find a difference rather than in the event-rich early stage.”

Kleiman believes the Achilles' heel of the DAPT Score “is that it doesn’t take into account some of the technical factors that are recognized later on.” Researchers are “so committed to some basal duration of DAPT therapy” that they can sometimes forget that “part of how long you treat someone is determined by how they've tolerated it during that lead-in period, whether you believe it's 6 months or 12 months,” he said. “That never shows up in studies because it’s a very subjective judgement and it’s very hard to quantify, but I think that’s what we do day to day.”

Results of the ongoing prospective, randomized TROPICAL-ACS trial “may help solve” the issue of DAPT duration, according to Bonello, Laine, and Frere.

Yet physicians who wish to stop clopidogrel and keep their patients on aspirin monotherapy after 1-year should breathe easy, the study authors say. “Recent studies have demonstrated that patients treated with second-generation DES who were event-free at 1 year and thereafter maintained on [aspirin] alone have a low subsequent rate of [stent thrombosis], and data from the present study confirm these findings,” they write. “Our data also reinforce the observations from the PARIS registry that planned DAPT discontinuation often occurs in patients with a lesser extent of disease, and is associated with a low overall event rate.”

Note: Several co-authors of the paper are faculty members and/or employees of the Cardiovascular Research Foundation, the publisher of TCTMD.

One in Four ICD Patients Need Reintervention Within 5 Years

Impact of Aspirin and Clopidogrel Hyporesponsiveness in Patients Treated With DES