A report from the Society of Thoracic Surgeons database provides strong support for the role of the LAA in thromboembolic stroke evolution. 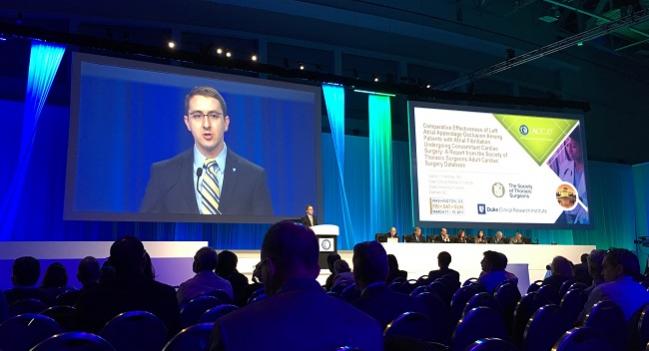 WASHINGTON, DC—Closing off the left atrial appendage (LAA) as an add-on procedure while performing other cardiac surgery in patients with A-fib results in a reduction in risk of embolic stroke of nearly 40% over 12 months, according to results of a study presented here on Sunday at the American College of Cardiology (ACC) 2017 Scientific Session. Patients who had surgical LAA occlusion also had a 15% reduction in all-cause mortality compared with those who did not have the procedure.

The results are in line with recommendations from the 2014 AHA/ACC/HRS Guideline for the Management of Patients With Atrial Fibrillation, which suggest that prophylactic LAA occlusion may be considered in this patient population as an additive treatment.

“[T]his study does support the fact that exclusion of the left atrial appendage can be a potentially viable treatment option for patients,” said study presenter Daniel J. Friedman, MD (Duke Clinical Research Institute in Durham, NC), noting that potential for adding on the procedure should become part of discussions among heart teams.

The data come from the Society of Thoracic Surgeons (STS) database, which reflects approximately 90% of all cardiothoracic surgery programs in the United States. The inverse probability-weighted analysis consisted of 10,524 Medicare patients undergoing a first cardiac surgery in 2011 or 2012—either a mitral valve procedure with or without CABG, an aortic procedure with or without CABG, or isolated CABG. All procedures were performed surgically and included clipping, stapling, and excision. Newer percutaneous methods for closing off the LAA, such as the Watchman and Amplatzer Amulet, were not studied.

Overall, 37% underwent LAA occlusion as an add-on procedure. Compared with patients who did not have LAA occlusion, those who did were more often younger, female, more commonly had nonparoxysmal A-fib, and had slightly lower CHA2DS2-VASc and STS scores.

In a press conference with the media following his presentation, Friedman implied that the results should be considered a jumping-off point for discussion. But he added that whether or not LAA occlusion is a safe add-on in all patients with A-fib who are undergoing a first cardiac surgery, as well as whether a surgical or percutaneous method is best, remain open questions for further investigation.

Whether anticoagulants should be discontinued after LAA occlusion is another issue for more research, Friedman and others stated.

To Anticoagulate or Not After Occlusion?

Panelist David Wilber, MD (Loyola University Medical Center, Baltimore, MD), expressed surprise at the large decreases in thromboembolism rates given the diversity of procedures within the population, as well as at the anticoagulant finding.

“[I] guess I would say I would be a little cautious until I understood the broader implications of these data . . . in terms of assessing the completeness of closure and its success long term before we take it to heart clinically,” he noted.

Wilber further questioned whether the data imply that anticoagulation can be routinely stopped after LAA occlusion if there is good reason to believe that the appendage has been excluded from the circulation.

“Although it’s going to be incredibly important down the road to have an understanding about whether or not anticoagulation can safely be stopped in these patients, we didn’t look at it,” Friedman replied. “And I would be very cautious about trying to read into our data on that.”

In a press conference, Jagmeet Singh, MD (Massachusetts General Hospital, Boston), called the results “fairly remarkable,” and said they make a strong case for actively considering surgical ligation of the left atrial appendage in patients who are undergoing CABG or mitral valve surgery. But, he said, longer and randomized studies are needed to ascertain if the benefits of LAA occlusion persist long term, especially since there are areas aside from the LAA that can contribute to thromboembolism, as well as the fact that LAA occlusion “is not without problems itself . . . and sometimes can be incomplete.”

Friedman agreed, adding “it’s not quite as simple as: we’ve treated the left atrium, now we’re done with treating stroke.”

Singh further observed that at the moment he would be inclined to continue anticoagulants after LAA occlusion in patients with high CHA2DS2-VASc scores “indicating that the metabolic milieu is not great and would potentially be prothrombotic.” But he concluded that he would be “happy to be convinced by the data as it accumulates.”