Compared with no use of oral anticoagulants, warfarin and DOAC use did not increase the risk of bleeding in patients with NSTEMI or STEMI. 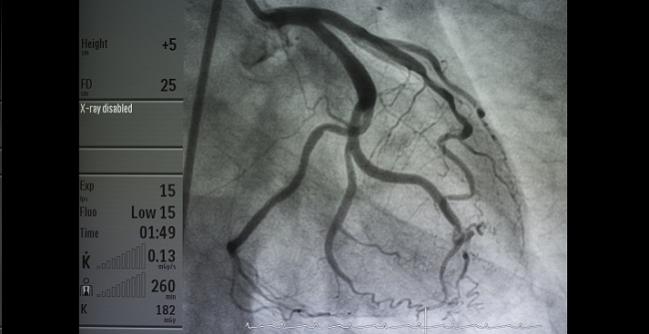 ANAHEIM, CA—Patients with a history of atrial fibrillation taking warfarin or any of the new direct oral anticoagulants (DOACs) who are hospitalized for acute MI are not at an increased risk of bleeding following coronary angiography with or without revascularization, according to the results of a new observational analysis.

Moreover, for STEMI and NSTEMI patients, use of warfarin or DOAC therapy was associated with a significantly lower risk of in-hospital mortality compared with not taking oral anticoagulation.

“Atrial fibrillation guidelines recommend the use of long-term oral anticoagulant therapy as driven by the individualized predicted stroke risk,” said senior investigator Christopher Madias, MD (Tufts Medical Center, Boston, MA). “The trade-off, of course, of any anticoagulant strategy is the inherent increased risk of bleeding, particularly during the periprocedural period.”

To TCTMD, Madias said the results show that “urgent revascularization can be done safely on patients on oral anticoagulation, particularly the DOACs.”

The optimal medical treatment strategy for patients with atrial fibrillation who must undergo coronary revascularization for MI is currently debated, with limited data available to guide clinical practice. Recently, an expert North American panel released a consensus document for how to best manage patients with atrial fibrillation undergoing PCI. In general, a washout period to minimize the anticoagulant effect before procedures is recommended, but urgent or emergency procedures should not be delayed due to the presence of anticoagulation, according to the experts.

Analysis of the NCDR Action Registry

In an analysis of 6,471 STEMI and 19,954 NSTEMI patients with prior atrial fibrillation included in the National Cardiovascular Data Registry (NCDR) ACTION database, the investigators assessed in-hospital bleeding and mortality risk based on the patient’s periprocedural infarction therapy.

In the NSTEMI group, nearly 40% of those not taking oral anticoagulants underwent angiography within 24 hours compared with 26.0% and 29.8% of those treated with warfarin and DOAC therapy, respectively.

Despite similar rates of angiography in the STEMI patients, there was no significant difference in the risk of in-hospital bleeding among patients treated with oral anticoagulation and those not taking the medication. Similar results were observed in the NSTEMI patients.

The rate of in-hospital mortality among STEMI patients taking no anticoagulation, warfarin, and DOAC therapy was 14.9%, 14.7%, and 11.2%, respectively. Overall, the use of warfarin was associated with a 22% reduction in the risk of in-hospital mortality in STEMI patients, while DOAC therapy was associated with a 39% lower risk (both when compared with no anticoagulation).

Among the NSTEMI patients, the rate of in-hospital mortality in those not taking anticoagulation, those taking warfarin, and those taking DOAC therapy was 6.1%, 5.5%, and 3.7%, respectively. This translated into an 18% lower risk of in-hospital mortality among warfarin-treated patients and a 33% reduction in risk among those who received DOAC therapy (both when compared with no anticoagulation).

‘Limited by the Data’

As for the reason why mortality might be lower among the patients taking oral anticoagulation, Madias stressed the analysis is retrospective and residual confounding can’t be eliminated.

“There are many limitations to the study,” he said. Still, the results are reassuring, particularly in that STEMI patients with prior atrial fibrillation, many of whom might be perceived to be at a heightened risk of bleeding with warfarin and DOACs, did not bleed any more frequently.

As to why more than 60% of patients with prior atrial fibrillation were not taking oral anticoagulation, Madias noted there was nothing in their dataset to explain the discrepancy.

“You dose anticoagulants based on individual stroke risk, and all the groups had similar levels of stroke risk in terms of their CHA2DS2-VASc scores, which were in the range of 3 to 5 in all the patients,” he told TCTMD. “We are limited by the data. For example, we don’t know if some of these patients had persistent versus paroxysmal atrial fibrillation, which might explain anticoagulant use. We don’t have that answer.”

PRESERVE Puts the Kibosh on Approaches to Preventing Contrast-Associated AKI