The observational analysis echoes a 2012 report that inspired an FDA label change. But it also raises questions. 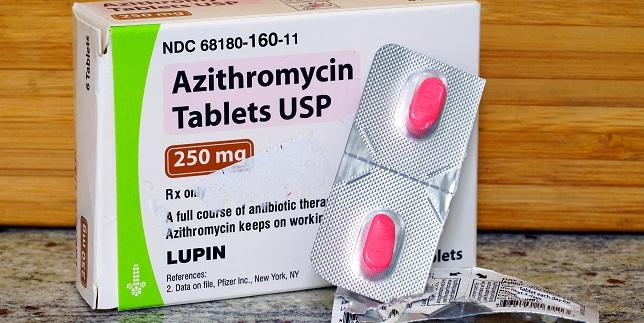 Azithromycin use outside the hospital setting is associated with significantly higher risk of death—both cardiovascular and noncardiovascular—but not sudden cardiac death, according to a retrospective cohort study of data on nearly 3 million people.

These results largely confirm a 2012 New England Journal of Medicine paper that raised a red flag of harm with the antibiotic, known to cause QT prolongation. But both studies are observational and may carry residual confounding, lead author Jonathan G. Zaroff, MD (Kaiser Permanente Northern California, Oakland), and colleagues stress in their paper published last week in JAMA Network Open. Other evidence arriving over the years has been mixed.

In 2013, the US Food and Drug Administration updated azithromycin’s label to caution against its use in patients at risk for ventricular arrhythmia, and in 2014 the agency asked Pfizer, which sells the medication under the brand names Zithromax and Zmax, to conduct further epidemiologic studies.

“We wanted to verify the prior scientific findings that showed this association between azithromycin and cardiovascular death and add, with stronger methodology, to that story,” Zaroff told TCTMD.

He emphasized that their results should not unduly worry physicians and their patients: “Heart disease is very common, and azithromycin is very commonly prescribed to patients with heart disease. The benefits of using azithromycin to treat infections such as pneumonia are well established and generally should outweigh the very small possible risk of cardiovascular death in the large majority of cases.”

Where clinical judgement should most come in, Zaroff added, is for patients at high risk of CV events who could do well with an alternative antibiotic.

The researchers examined Kaiser Permanente California data spanning from 1998 to 2014, comparing 1.7 million outpatient prescriptions for azithromycin against 6.1 million for amoxicillin, an antibiotic that hasn’t been linked to CV events. In the 2.9 million individuals studied, the mean age was 50.7 years and 61.8% were women.

After adjusting by propensity score, azithromycin was linked to increases in cardiovascular, noncardiovascular, and all-cause mortality as compared with amoxicillin within the first 5 days, but no link with sudden cardiac death was seen. Between 6 and 10 days, there were no differences in risk between the two antibiotics.

“Although these analyses cannot establish causality, prescribers should be aware of this potential association,” the investigators conclude.

Cardiologists are likely to be “familiar with the background” of this drug’s story, Salim Virani, MD, PhD (Baylor College of Medicine and Michael E. DeBakey VA Medical Center, Houston, TX), commented to TCTMD. These data usefully corroborate the 2012 report, but even the best statistical techniques can’t remove the possibility of unknown confounders, he agreed. Moreover, the absolute risk of events is low.

Coming on the heels of other observational studies and a full 7 years after the FDA’s label change, this latest report isn’t likely to change practice, he predicted.

Virani, like Zaroff, emphasized caution when interpreting the results. For example, there were numerous baseline differences between the two groups, suggesting there may have been others left unaccounted for during adjustment. Another issue is that the expected mechanism would be sudden cardiac death due to QT prolongation; yet, this endpoint wasn’t increased.

Asked what might explain the lack of difference in sudden cardiac death, Zaroff said it’s a mystery. “The hypothesized mechanism whereby azithromycin would cause cardiovascular death has always been QT-interval prolongation and cardiac arrhythmia,” he explained. “Though a large minority of the cardiovascular deaths we observed in our study were sudden deaths and thus suggestive of arrhythmia, there were more deaths related to other cardiac conditions such as heart attack or worsening heart failure. We don’t have a clear mechanism to explain how azithromycin would directly cause those deaths.”

The rarity of CV events with azithromycin makes it difficult to design definitive, prospective studies, he said. “That is a real problem with this research question.”

Too Many HF Trial Results Underreported or Never Published

Sapien 3 in Intermediate Risk: Death or Stroke Similar to SAVR at 5 Years

In the Wake of Guidelines, Antibiotic Prophylaxis for Infective Endocarditis Declined for Moderate-Risk Patients