Experts agree that clinicians should focus with patients more on gaining fitness and less on losing weight. 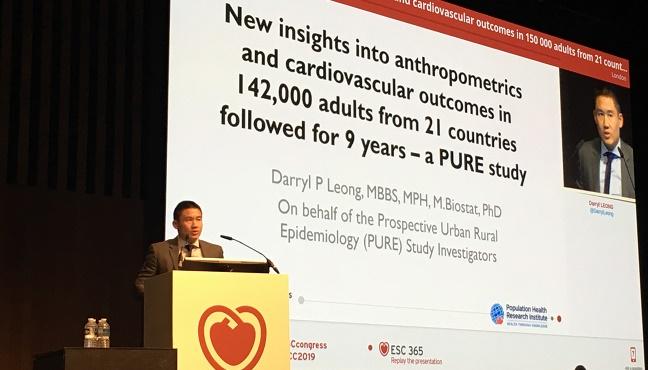 PARIS, France—A sweeping population study has found that all-cause mortality risk drops with body mass index (BMI) but that lower is not necessarily better. In fact, the lowest mortality in this global analysis was found among patients with middle-range BMIs. Additionally, other anthropometrics like the waist-to-hip and strength-to-weight ratios are better than BMI at predicting some cardiovascular events and mortality.

“One of the ways in which this has affected my clinical practice is that I tend not to focus as much on weight loss as a goal for patients, but rather increased fitness and strength,” Darryl Leong, MBBS, MPH, PhD (Population Health Research Institute, Hamilton, Canada), told TCTMD. “I've been encouraging folks not to dwell on exactly what their weight is as much as just trying to do exercises at appropriate levels.”

Leong presented the findings today at the European Society of Cardiology (ESC) Congress 2019,

“These issues of how is the body comprised and how is it working and how does that relate to cardiovascular risk is a really interesting area,” Christopher Granger, MD (Duke Clinical Research Institute, Durham, NC), who was not involved in the study, commented to TCTMD.

“The most striking finding [is that it’s] not good to be thin if you want to have a body that has the lowest risk of death. Now having said that, these relationships are also confounded,” he pointed out. “For example, if you get cancer then you get skinnier, and if you're malnourished or sick or depressed then you may get to be lower body weight. That’s associated with death not because you're thin but because something else that made you thin is not good for you. But it is interesting that, at least on the surface, the optimal body weight is not to be very thin and it's not to be obese either; [rather] it's to be BMI 25 to 30, which is a little bit high average.”

BMI Not the Best Metric

For the study, Leong and colleagues followed 142,410 adults (35-70 years old) from 21 countries across a range of incomes over a median 9.5 years. All analyses were adjusted for age, sex, geographic region, education, physical activity, alcohol and tobacco use, and baseline hypertension and diabetes status.

There was an overall direct association with diabetes and increased BMI, but only slight trends were observed for hypertension and cardiovascular disease. For the relationship between BMI mortality, the researchers identified a U-curve—those with both the lowest (< 20 kg/m2) and highest (≥ 35 kg/m2) BMI showed the highest risk of mortality while those with a BMI between 25 and 30 kg/m2 saw a slight protective effect. This curve was attenuated when cardiac death was looked at in isolation, namely BMI < 20 kg/m2 was associated with no increased risk of cardiac death, but the protective effect was still observed for those with BMIs between 25 and 30 kg/m2.

Waist-to-hip ratio, as stratified into sex-specific quartiles, was directly associated with both diabetes and cardiovascular disease risk but only modestly with hypertension. Here, the researchers found a J-shaped curve with relation to overall mortality and a solid positive association with cardiovascular mortality.

For the strength-to-weight ratio, as measured through hand strength, there were continuous inverse relationships with developing diabetes (the strongest link), cardiovascular disease, and mortality (both cardiovascular and all-cause), but there was no predictive effect on hypertension.

The ideal BMI for both men and women in terms of the lowest mortality risk was 27 kg/m2. For waist-to-hip and strength-to-weight ratio, these measurements were 0.83 and 0.42, respectively, for women and 0.93 and 0.50 for men.

“Our results lead us to question whether the definition of a so-called healthy BMI of 20 to 25 kg/m2 should in fact be reevaluated,” Leong concluded. “Secondly, we believe that the assessment of waist-to-hip circumferences and muscle strength may have more clinical importance than body mass index. Lastly, our findings suggest that a greater emphasis should be made to improve muscle strength in order to reduce the risk of poor health outcomes.”

There are a couple reasons why the study findings panned out the way they did, Leong mused. “We collected a lot of information on other potential confounding factors that we could adjust for and that may not have been done to the same extent in previous work,” he said. “Secondly, we did include a large number of participants from low-income countries, and these individuals would not have been included in many of the previous analyses examining BMI and mortality. Lastly, a lot of previous data originated from the 1990s, and there have been substantial improvements in therapies in cardiovascular preventive strategies.”

Session co-moderator Maryam Kavousi, MD, PhD (Erasmus Medical Center, Rotterdam, the Netherlands), told TCTMD she had concerns over the fact that most of the study results weren’t segmented out by gender.

“It would have been very informative, even if you don't find differences, just to report [them separately] so that people see what the shape of the association is for both sexes,” she said. “I would like you to think about it beforehand, when you're doing analysis and then also in reporting the results, meaning that if you think about it beforehand, you might want to gather more information also to explore those gender differences.”

Leong said his research group is beginning to look more at gender differences in further analyses, but that in limited analyses so far the mortality curves were similar for both men and women.

“There are both advantages and disadvantages” of combining such a diverse group of people in an analysis like this, according to Granger. “The advantage is that's not been done before, and in fact, part of the whole point of this [was] to see [whether] these relationships look like they hold up across different cultures and it looked like they did.”

Adjusting for gender is complicated, Granger added, “because women are smaller than men and women have a different body make up especially after menopause.” Age may be “even more important, because as people get older, they actually get . . . a little bit heavier and a little bit shorter too,” he said.

During the session, Granger asked Leong if his group saw any differences in how height and weight relate to outcomes. Leong said they had not done any analysis on height yet, especially since this could be confounded by ethnicity, but that weight follows a similar pattern as BMI. “The reason I asked about height and weight is because we've shown the risk of death following myocardial infarction is pretty strongly related to height,” Granger said, adding that both taller and heavier people are less likely to die in the acute phase after myocardial infarction.

Going forward, Leong said more needs to be understood about how physical frailty plays into all of this “because that seems to be a very powerful predictor of clinical events and we don't have any great solutions for it when people have low muscle strength.” Undernutrition is another issue “that's probably a relatively neglected area as well,” he added.

For now, Granger echoed Leong’s advice to clinicians to place a greater emphasis with patients on gaining fitness rather than losing weight. “Especially for some people, maybe for most people, it's really hard to lose weight and keep it off and maybe it's a little bit easier to become more fit,” he said. “So I think it's an important message.”

PURE Study: New Insights Into Anthropometrics and Cardiovascular Outcomes in 142,000 Adults From 21 Countries Followed For 9 Years

Obesity Causally Linked to CAD but Not Stroke, Meta-analysis Hints