Can Clinicians Really Put a Stop to Atherosclerosis? Experts Explore the How and When of CVD Prevention

To work, prevention needs to focus on early intervention and guideline implementation, according to speakers at EAS 2018. 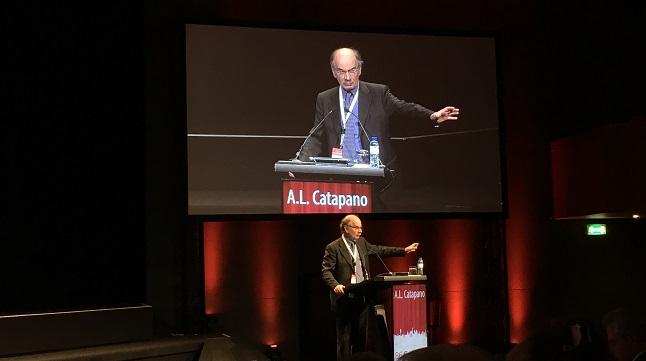 LISBON, Portugal—Coronary artery disease’s causes and its treatment have been extensively studied, but less well established is whether clinicians can actually thwart atherosclerosis from developing in the first place or prevent associated cardiovascular events.

This topic was the subject of a special session here at the 2018 European Atherosclerosis Society (EAS) meeting.

“The question is: when do we start developing disease?” said Alberico Catapano, MD, PhD (University of Milano, Italy), during his talk in a joint European Society of Cardiology (ESC)/EAS session. “We do, over time, develop the presence of atherosclerosis. . . . Whether this is the plaque that will kill us or take us to bed or the coronary unit for a few days, we don’t know.”

What is well established is that atherosclerosis can be reduced—primarily through lipid-lowering measures, which “shrink the plaques” and change their “composition toward a more ‘stable’ phenotype,” Catapano said. But timing of treatment is really what will affect prevention of adverse events, he added. “The building [up of plaque] over time plays a role, and having a lower cholesterol for a longer period of time makes a huge difference.”

Yes, genetics matter, Catapano commented, but they do not explain the whole picture; prior research has shown that lifestyle modifications can have profound risk-reducing effects, even in people with a high-risk genetic profile. However, if clinicians were to screen for high genetic risk profiles in young patients, “perhaps those would be the good candidates for an early and more intensive intervention in order to prevent atherosclerosis,” he said. “We could personalize the prevention of cardiovascular disease through predictive and prescriptive genomics. . . . Imaging would play a key role there in order to spot where the disease is starting to peak.”

Catapano said he sees a lot of potential for “lifestyle-based genomic-guided precision cardiovascular prevention,” with the caveat that artificial intelligence tools will be necessary. “That is the future of prevention,” he predicted.

Diving deeper into the aspect of when interventions should start, Diederick Grobbee, MD, PhD (University Medical Center Utrecht, the Netherlands), centered his talk on comparing early versus late treatment.

“The simple answer to the question, ‘What works: early or late?’ is yes. Both work,” he said, noting that it’s difficult for clinicians to know where to focus.

Guidelines are good solutions, Grobbee said, but he showed evidence that blood pressure- and lipid-lowering targets are being reached in less than 50% and 20-25%, respectively, of patients in Europe. “So we're not doing something entirely right. . . . We know what to do, but we still have to know how to do it,” he observed, adding that guidelines are good tools though not the only option.

“You can have a fast car [and] still be stuck in a traffic jam,” Grobbee commented.

Future studies should focus on better methods of implementation of the guidelines, he suggested. “It may not be the most sexy sort of area research, but it certainly is very important one.”

Telehealth technologies and bigger-picture thinking will play a role in increased dispersal of quality care by encouraging early interventions worldwide, he predicted. Cardiologists “have a global responsibility,” Grobbee stressed. “We can't only focus on where we are.”

A Role for Thrombus Inhibition?

Stephan Gielen, MD (Klinikum Lippe, Detmold, Germany), began his talk on inhibiting thrombus formation to prevent ACS by admitting that he has a personal interest in this topic—he has been on a statin for 10 years and is curious whether he should be on daily aspirin to reduce his cardiovascular risk.

Reductions in post-ACS mortality in the past few years have been “truly one of the great advances” in the field, he said. However, data have shown that there is still a substantial number of life-years lost in both women and men following a cardiovascular event. “There is still a lot to do to reduce mortality,” Gielen said.

“What we need is antithrombotic therapy as a mainstay of secondary prevention after ACS,” he observed. Obviously, the optimal length of DAPT is still an issue for discussion for most patient groups, but “it is clear . . . that there is an interaction between thrombus and progression of cardiovascular disease.”

For primary prevention, however, the jury is still out. The potential benefit is “offset by the addition of bleeding complications or GI bleeds,” Gielen said. “It is a little bit of a blind spot for antithrombotic treatment.”

For the final talk of the session, Ulrich Laufs, MD, PhD (University of Saarland, Homburg, Germany), looked specifically at the issue of treatment targets, something the European guidelines have stuck with even as US guidelines have abandoned targets in favor of tailoring treatment to patient risk.

Exploring whether targets are even needed, he presented what he called “depressing” data that show “we are far away from reaching our targets” even in very high-risk patients. However, “this is in significant contrast with our perception,” Laufs said. Another study found that two-thirds of cardiologists think that their patients are properly treated, but, as Grobbee pointed out, less than a quarter are even meeting their lipid-lowering targets.

Cost isn’t the issue given that roughly 80 Euros per year would cover statin therapy that would lead to a 50% reduction in LDL cholesterol, Laufs said. Rather, “the biggest opportunity lost is in medication adherence,” he noted. “All our studies show us that up to one-third of all statins prescribed are not taken as intended by the prescribing physician. That effect is the biggest opportunity missed.”

If statins were prescribed early enough in patients who need them, “we could in fact put interventional cardiology partially out of business,” he said. “We could prevent a significant proportion of the morbidity of cardiovascular disease.”

Ultimately, Laufs said he is in favor of the existing European guidelines and targets staying just as they are. For very high-risk patients, “we need to establish an optimal oral therapy, and from my perspective, ezetimibe has to be part of this,” he advised, adding that high Lp(a) also should be taken into account more often. However, Laufs acknowledged, “these recommendations are not new.”

“The adoption of new evidence is needed and is taking place, but I think more important is the implementation of what we already know,” Laufs concluded.

Session co-chair and former ESC President Jeroen Bax, MD, PhD (Leiden University Medical Center, the Netherlands), summed up the talks by saying: “A lot of things have been achieved, and we also see that there is a lot of room for improvement.” Upon seeing his outpatients in clinics this week, “I will double check what I’m doing with my patients,” he added. “I think that most of us can directly achieve what we want to achieve.”