Further testing within 30 days of the ED visit was linked to greater use of downstream invasive angiography and coronary revascularization. 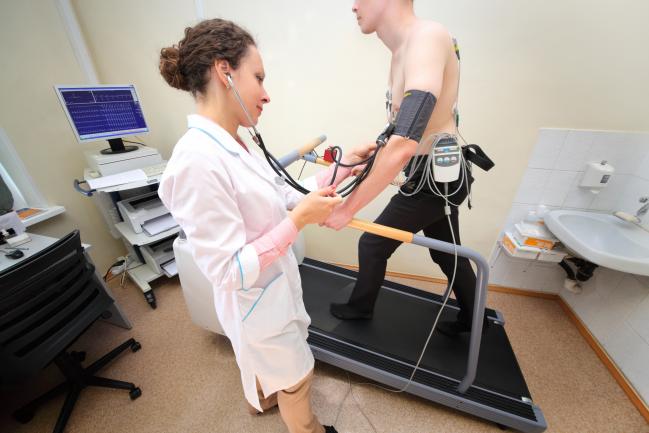 In patients with chest pain presenting to the emergency department (ED), further cardiac testing within 30 days is associated with an increase in invasive coronary angiography and revascularization but not a reduction in hospital admissions for acute myocardial infarction, a new study shows.

The results, which were published June 26, 2017, in JAMA Internal Medicine, suggest that routine cardiac testing in chest pain patients without evidence of ischemia may “increase resource utilization without improving outcomes,” according to the researchers.

“In most cases, they’re not having an acute coronary syndrome based on their troponin testing, but it’s a very common clinical question as to what the right next steps are and over what time period that should happen,” said Sandhu. “In spite of it being a very common question—with very important effects both clinically and economically—there isn’t a lot of great data about the standard practice regarding routine stress testing.”

Once acute MI has been ruled out with serial biomarker testing and an ECG, the American College of Cardiology/American Heart Association (ACC/AHA) recommends noninvasive cardiac testing for inducible ischemia (exercise ECG, stress echocardiography, or nuclear stress testing) or anatomical coronary artery disease (coronary CT angiography) prior to discharge or within 72 hours.

Previous observational studies have challenged the ACC/AHA recommendations by showing a lack of association between routine stress testing and a reduction in subsequent coronary events, said Sandhu.

However, a major limitation of observational studies is the risk of unmeasured confounding variables. For example, a patient’s description of chest pain or how frail they appear to the ED physician could influence the decision to send a patient for stress testing and ultimately influence the results, said Sandhu.

In the latest analysis, which includes 926,622 insured patients who presented to the ED with chest pain between 2011 and 2012, the researchers performed an “instrumental variable analysis,” which is frequently used in economic research and attempts to account for unmeasured confounding variables.

In the present scenario, the analysis is stratified by another variable—the day of the week—and this variable/instrument should be able to predict whether the patient receives the treatment of interest (cardiac testing) but does not otherwise affect clinical outcomes, Sandhu told TCTMD.

For example, given hospital resources, patients with chest pain but without evidence of ischemia would typically receive stress testing the next morning if they presented to the ED on Monday through Thursday, but it would be deferred if they presented on Friday to Sunday. In this analysis, weekday-versus-weekend presentation was highly correlated with exposure to stress testing, said Sandhu. Importantly, all other baseline characteristics were similar between weekday and weekend patients, meaning the type of patient who presents is similar all 7 days of the week.

“This provides some degree of evidence that we’re getting the balance that we want,” said Sandhu.

In the standard multivariable model adjusted for observable risk factors, such as age, sex, cardiovascular comorbidities, and medication use, cardiac testing performed in 1,000 patients within 2 days of the ED visit was associated with 92.1 more coronary angiograms and 11.6 more revascularizations at 1 year when compared with no testing, but it did not have an impact on acute MI admissions.

Using the weekday-versus-weekend instrumental variable analysis, investigators also observed a significant increase in coronary angiography and revascularization at 1 year among patients who underwent testing within 30 days. Compared with no testing, 36.5 and 22.8 additional patients per 1,000 individuals underwent angiography and coronary revascularization if they received cardiac testing within 30 days of presenting to the ED. There was no difference in acute MI admissions with cardiac testing in instrumental analysis.

Michael Blaha, MD (Johns Hopkins Medical Institute, Baltimore, MD), who was not involved in the study, said subsequent cardiac testing for ED patients with chest pain without ischemia is not controversial, per se, but the medical community is recognizing it provides low value in low-risk patients.

Similarly, Ajay Kirtane, MD (Columbia University Medical Center, New York, NY), told TCTMD that testing is typically dependent on the patient’s pretest probability of heart disease, and that physicians often strive to avoid testing in low-risk individuals. That said, he cautioned against adopting a “nihilistic approach” where all subsequent testing is vilified as unnecessary.

“Chest pain is pretty common complaint in people who come to the emergency room,” he said. “In the US, we’ve sort of been operating under a paradigm where there a lot of ramifications for missing a patient who has severe disease, or who has had a heart attack. We don’t want to miss those patients. On the other hand, does this mean we have to test every patient that comes into the emergency room for coronary disease? The answer to that is no.”

Missed ACS is one of the top reasons for malpractice claims against emergency physicians, and as a result, many are unwilling to accept a “miss rate” of less than 1%, according to Sun and Redberg. With such fears, the “current ED approach to suspected ACS is to err on the side of more testing and more admissions, and results in more than $3 billion in annual hospital costs,” they say.

For the editorialists, the present study helps address some of the limitations of earlier observational studies and the findings are “consistent with a rapidly expanding evidence base that challenges the current paradigm of early noninvasive testing after an ED evaluation for suspected ACS.” The existing strategy, they add, “is characterized by enormous costs, substantial practice variation, and absence of efficacy data.”

Time for a Randomized, Controlled Trial

To TCTMD, Sandhu acknowledged their study is also an observational analysis despite the different statistical approach. Still, these data should be taken into account with other evidence.

“I think the data supports shared decision-making, where the emergency department physician or the cardiologist talks to the patient about how there’s not necessarily great evidence about whether they need to stay in the hospital for a stress test or go home and follow-up at a later time,” said Sandhu. “I think that decision needs to be made taking into context a patient’s preferences and the provider’s understanding of that particular patient’s risk and other factors.”

Given the current unknowns, there is also a need for a randomized controlled trial to understand the optimal treatment pathway for patients with chest pain in the ED.

“I think this would be an incredibly important topic for the NHLBI [National Heart, Lung, and Blood Institute] to try to tackle because there’s huge economic consequences given the amount of observational stays and stress testing that is performed,” said Sandhu.

Sun and Redberg agree that a randomized clinical trial is the ideal study design to eliminate confounding. “However, the existing culture and guidelines encouraging testing even of low-risk patients and ever-present concerns about malpractice may limit recruitment,” they write.

Blaha told TCTMD there is no specific study showing an advantage of one test over another and no good studies systematically comparing cardiac testing versus no-testing. In a “no-test” study, it would be difficult to show an improvement in near-term clinical outcomes in lower-risk patients, he said.

Although it might not reduce acute MI admissions or other outcomes, cardiac testing in chest pain patients without ischemia might also provide advantages, said Blaha. For example, it might help get patients on appropriate medication, ensure appropriate follow-up for the right patients, and provide reassurances. Even a negative test result might prevent future ED visits and other costly work-ups in the future.

“So to me it is a little narrow-sighted to only consider short-term outcome benefits in such patients,” he said.