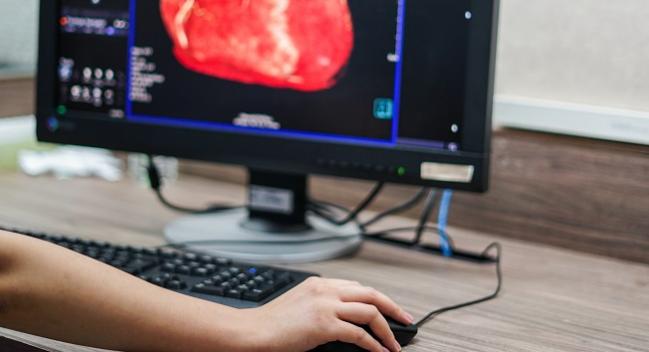 Use of coronary computed tomographic angiography (CCTA) prior to invasive angiography in patients with non-ST elevation acute coronary syndromes may help to pinpoint the patients more likely to benefit from revascularization, a prespecified analysis from the VERDICT trial shows.

The new analysis opens the door for the noninvasive test to be applied in higher-risk patients who are typically sent straight to cath. “Coronary CTA may be used to rule out significant coronary artery disease in patients with NSTE ACS and thus potentially guide patient management,” write Jesper J. Linde, MD, PhD (University of Copenhagen, Denmark), and colleagues in a paper published online today in the Journal of the American College of Cardiology.

Current guidelines state that CCTA may be useful as a rule-out test for patients with stable CAD and no known disease; they also recommend that clinically confirmed NSTE ACS patients should head directly for invasive coronary catheterization. As the authors of the current study point out, however, up to one-third of these higher-risk patients sent for cath are found not to have obstructive disease.

“The most benefit of CT would lie in the patients with high-risk coronary anatomy and the highest likelihood of receiving revascularization,” senior author Klaus Kofoed, MD, PhD (University of Copenhagen), told TCTMD. “Our idea was if you could preselect patients in whom you think that revascularization would provide the highest likelihood of benefit, so they wouldn't need the risk of having an invasive procedure, that would kind of be a very nice way of optimizing the treatment strategy.”

Commenting on the study for TCTMD, Todd C. Villines, MD (University of Virginia, Charlottesville), called it “unique,” stressing that current guidelines and appropriate use criteria for CCTA only support its use in low-to-intermediate-risk patients who have stable symptoms, based on the excellent negative predictive value in this population.

“This is a multicenter prospective trial in a population that current guidelines would not suggest the use of CCTA, so this is really exciting,” he said.

Randomized results from the Very Early Versus Deferred Invasive Evaluation Using Computerized Tomography in Patients With Acute Coronary Syndromes (VERDICT) trial were published in 2018 and showed no difference in long-term clinical outcomes between a strategy of very early versus later invasive angiography in patients with NSTE ACS. For the current analysis, Kofoed, Linde, and colleagues looked at the subset of 1,023 patients in VERDICT who also underwent preplanned CCTA in addition to early (n = 583 patients) or late (n = 440) invasive coronary angiography.

The aim was to gauge the ability of CCTA to rule out coronary artery stenosis using intracoronary angiography as the reference standard, as well as to identify any differences based on the timing of the scan. In the “early” group, median time to CCTA was 2.5 hours versus 59 hours in the standard (delayed) group.

Linde et al found that a coronary stenosis of 50% or greater was found by coronary CTA in 68.9% of patients and by invasive angiography in 67.4%, yielding a per-patient negative predictive value of 90.9%. Positive predictive valve, sensitivity, and specificity were 87.9%, 96.5%, and 72.4%, respectively.

To TCTMD, Kofoed noted that the role of CCTA in unstable patients has been questioned because of the potential for more coronary calcium, as well as for higher heart rates that would preclude early screening. In fact, this analysis turned up no differences between patients undergoing early versus late CCTA, including no differences in the amount of radiation and contrast use. “That was a promising finding that in this particular scenario could be very helpful for workflow of these patients,” he said.

“It therefore appears plausible that a coronary CTA conducted before intracoronary angiography in patients with NSTE ACS—regardless of clinical risk profile—might be used to identify patients with the highest likelihood of benefit from subsequent revascularization,” the authors write. “The observational design of our study, however, does not allow a firmer conclusion, and future studies are needed to elucidate this concept further.”

Kofoed told TCTMD that he personally has not yet altered his practice based on these observational data but does hope to move ahead with a small, short-term randomized controlled trial to validate these VERDICT findings.

Stephan Achenbach, MD (Friedrich-Alexander-University Erlangen, Germany), who wrote an editorial accompanying this VERDICT analysis, pointed to some caveats in interpreting what he termed a “very large accuracy trial” of CCTA. First and foremost, he noted, 325 patients were excluded from the CCTA analysis for reasons that were “not entirely clear,” which opens the potential for bias. Also, off-site core-lab interpretation of the CCTA scans and the accuracy of those core-lab readings in VERDICT might not be easily matched by hospitals relying on staff readings.

Then there’s the problem of using a 50% stenosis threshold, Achenbach continued, since it’s increasingly clear that stenoses of 50% and higher may not actually be prognostically meaningful. “A comparison with invasively measured FFR and/or a comparison against the number of patients who actually underwent revascularization would help to better put the trial in a clinical context, especially regarding its positive predictive value,” Achenbach writes. “What are the clinical consequences when computed tomography shows a stenosis of 50% or more?”

Even with these limitations, however, the paper adds “substantial value” to the field, writes Achenbach, and it supports a clinical trial as the next step. Such a trial, he says, would randomize high-likelihood patients with ACS to receive either CCTA or invasive angiography as the first diagnostic test.

Villines, likewise, called the data “hypothesis-generating,” adding that it will also be important to understand the role of high-sensitivity troponin in any new diagnostic pathway. “Some patients have elevated troponins, but they aren’t rising as fast as you would think and you are not sure if this is myocardial injury or type 1 MI,” he told TCTMD. “Using CT in those patients will probably prove beneficial.”

As such, trimming down on the number of patients being needlessly rushed to cath would help streamline hospital workflow. “Especially if someone comes in on a Friday, for example, and won’t got to cath lab until Monday—maybe CCTA would be able to tell us that the patient is low risk and it’s okay to wait, if we see on the CT that the culprit lesion is in a small vessel or that they have no signs of obstructive CAD.”

Villines pointed to a number of limitations to the current study in addition to the exclusions noted by Achenbach. For one, investigators did not assess plaque features, which could help with prognosis, he said. “We know from trials in the emergency department, like ROMICAT 2, that high risk plaque features can improve your accuracy for detecting ACS, and the authors did not report that.”

Number two, he continued, VERDICT investigators had a “relatively high” nondiagnosis rate of 5.2%. “That highlights the need for good beta blockade for heart rate control”—a factor worth considering in the design of the randomized trial.