The small study compared use of a dedicated catheter for antegrade CTO crossing with a standard wire escalation strategy. 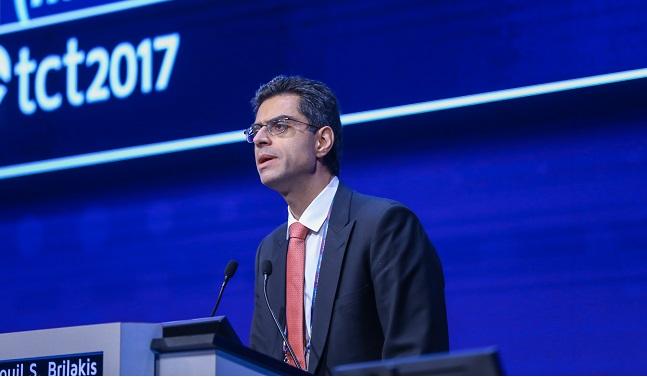 DENVER, CO—Upfront use of a dedicated catheter for antegrade crossing of coronary chronic total occlusions (CTOs) results in similar crossing time, success rates, complications, equipment utilization, and cost compared with a primary wire-escalation strategy, according to results of the CrossBoss First study.

The randomized controlled CrossBoss First study, published simultaneously yesterday in JACC: Cardiovascular Interventions, was conducted at 11 US centers, with procedures performed by experienced operators. Brilakis acknowledged there is a learning curve for using CTO crossing devices and techniques, but said high success rates can be achieved.

The groups were well matched for baseline clinical and angiographic characteristics. Two-thirds of target CTO lesions were in the right coronary artery; most were complex, with moderate/severe calcification in 44% and moderate/severe proximal vessel tortuosity in 24%.

Overall technical and procedural success rates were high and similar between the two groups. In the CrossBoss group, half of the procedures were successful using antegrade dissection and reentry with the Stingray system (Boston Scientific), whereas in the wire-escalation group, half of the procedures were successful with antegrade wire escalation, Brilakis said. Use of the retrograde approach was about 17% in both groups. One limitation of the study, he said, is that crossing was achieved by advancing a guidewire through the CrossBoss catheter in 22% of patients randomized to the CrossBoss group.

In a post hoc subgroup analysis of CTOs due to in-stent restenosis (ISR), upfront use of the CrossBoss catheter required a median crossing time of 41 minutes compared with 66 minutes for wire escalation (P = 0.046). Procedural MACE was higher in the wire-escalation group with ISR (4.17% vs. 0%; P = 0.302).

“Further studies are needed to determine whether some subgroups, such as in-stent occlusions, are better suited for crossing using the CrossBoss catheter,” Brilakis said.

Importantly, he noted, all operators participating in the study were already in experienced CTO PCI.

In other results, procedural and fluoroscopy times, air kerma radiation dose, and contrast dose did not differ between the two strategies. Overall equipment cost in both groups was about $5,000.