The underpowered trial suggests that CTO PCI reduces the likelihood of patients having severe angina that requires a repeat procedure. 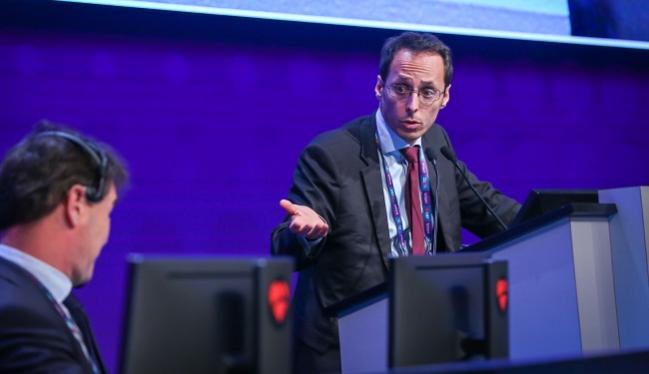 The change in segmental wall thickening measured by cardiac MRI (primary endpoint) was not improved in patients who underwent CTO PCI versus those who received optimal medical therapy with or without intervention on non-CTO lesions, Kambis Mashayekhi, MD (University Heart Center Bad Krozingen, Germany), presented at TCT 2017 here.

A secondary MACE endpoint, however, showed an advantage for CTO PCI at 1 year, driven primarily by a reduction in the rate of clinically driven repeat revascularization (5.0% vs 15.4%). Typically, patients were coming back due to severe angina symptoms, Mashayekhi said at a press conference.

Emmanouil Brilakis, MD (Minneapolis Heart Institute, MN), who was not involved in the study, told TCTMD, “That reinforces the point that the number one reason we’re doing CTO PCI remains symptom improvement rather than ejection fraction improvement.”

The trial was not powered for clinical outcomes, he noted, but the finding “is consistent with everything that we know so far.”

A large, sham-controlled trial is needed to definitively assess whether CTO PCI is improving symptoms, Brilakis said, noting that his group started the SHINE-CTO trial, which will randomize an estimated 142 patients to CTO PCI or a sham procedure, about a year ago. The primary endpoint is the change in disease-specific health status as assessed by the Seattle Angina Questionnaire.

Mashayekhi said that CTOs can be found in about 18% of patients undergoing diagnostic coronary angiography and pointed out that debate continues regarding whether PCI of those lesions is beneficial.

One trial—EUROCTO—showed that CTO PCI boosts health status, with improvements in angina frequency, physical limitations, and quality of life, in patients with stable angina. Two other trials, however, did not find a benefit from CTO PCI. EXPLORE failed to show a difference in LV function in patients with STEMI and DECISION-CTO demonstrated similar 3-year rates of death, MI, stroke, or repeat revascularization in the CTO PCI and optimal medical therapy groups in patients with ACS or stable angina.

The REVASC trial included 205 patients with a CTO and either clinical symptoms or a positive functional test for ischemia. Patients were randomized to PCI of the CTO plus optimal medical therapy or to optimal medical therapy with the option for PCI of non-CTO lesions. Investigators excluded patients with LVEF below 25%, ACS within 72 hours of the procedure, or contraindications to cardiac MRI.

CTO PCI did not improve segmental wall thickening at 6 months when looking at all CTO segments (P = 0.57) or when assessing dysfunctional CTO segments (P = 0.51). There was a hint of benefit in the subgroup of patients with a SYNTAX score of less than 13—indicating that they did not have major non-CTO lesions—but the difference was not significant (P = 0.12).

Measures of global LV function—LVEF and LV end-diastolic volume—did not differ between trial arms. Mashayekhi noted that the patients had relatively preserved LVEF at baseline (60% in the control group and 55% in the CTO PCI group), which might have made it difficult to show a difference in LV function with CTO PCI.

“I think this study is helpful because I think reducing angina is important,” Wayne Batchelor, MD, MHS (Southern Medical Group, PA, Tallahassee, FL), commented during a panel discussion at the press conference. “Nobody wants to have that as a rate-limiting or function-limiting symptom. So this is a very good therapy for angina.

“On the flip side,” he continued, “I think this data supports the concept of being able to use optimal medical therapy until you deem that it’s [failed]. There’s no downside that I can see right now in adopting that strategy of revascularizing what you can and leaving the CTO behind. I haven’t seen data to suggest we have to do this up front. I think it’s just that interplay between the patient’s symptoms and ease and risk of the procedure that is ultimately going to determine what the right answer is.”

Mashayekhi agreed that there is time to consider what to do with the CTO because the benefits of PCI will not be worse if the procedure is put off for 6 or 12 months, noting that the delay would allow for additional ischemia testing.

2 years ago
Revascularisation is indicated only to relieve ischemia . It is the lavel of ishemia which decides to cause symptoms or if more then threatens the life The decision to open A lesion or to modify does not depend on the severity of the lesion or the difficulty lavel of opening ,it is purely based on weather the particular lesion is responsible for symptoms that can not be handled by Gdmt Cto s are the lesions which are stable doveloped slowly backed up by adequate or in adequate collateral and cause or significantly add to cause ischemia and symptoms if All other lesion are opened and Pt is not symptomatic on gdmt , opening of additional lesion shall not help, may be it is a cto If all other lesions are opened and pt is still symptomatic cto pci shall definitely help in reducing the symptoms and quality of life In patients with multiple cto s or when ischemic myocardium caused by cto s is more it will definitely help symptoms as well as life expantacy The debate is un neccerory and is because of ego of certain cto interventionalist wants to open every cto and prove some thing that has been proved long time back ie ‘INTERVENTION IS AN ADJUVENT TO GDMT AND SHOULD BE USED JUDICIOUSLY ‘ Prem Aggarwal MD Dnb Fellow Phd cardiology Reasercher in chip pci