Researchers argue that even the MI benefit is debatable, emphasizing the increased use of downstream invasive procedures with CTA. 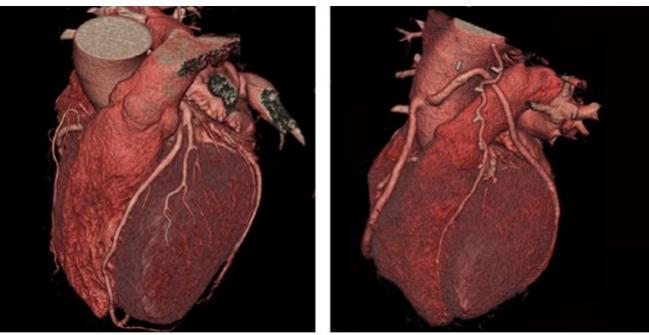 The use of coronary computed tomography angiography (CTA) compared with functional stress testing is associated with a reduction in the incidence of MI in patients with suspected coronary artery disease, but it comes at a cost of increased downstream procedures, such as invasive coronary angiography and revascularizations, a new meta-analysis shows.

The coronary CTA imaging strategy does not reduce the risk of mortality or cardiac hospitalizations, researchers found, but was associated with increased diagnoses of coronary artery disease, as well as increased use of aspirin and statins.

“Individual physicians and researchers will bring their own biases into how a study like this is interpreted,” lead investigator Andrew Foy, MD (Penn State College of Medicine, Hershey, PA), commented to TCTMD. “Biases aside, the increase in downstream procedures—cardiac catheterization and revascularization—is a strong signal and it’s a large effect size, especially if it’s applied on a population level. There’s really little doubt about that finding from my standpoint.”

Ron Blankstein, MD (Brigham and Women’s Hospital, Boston, MA), who was not involved in the study, told TCTMD there is no one perfect test when it comes to diagnosing suspected coronary artery disease and each comes its own inherent strengths and weaknesses.

“Any testing strategy has both advantages and limitations, and studies like this help us understand the trade-offs between them,” he said. “The trade-off is a reduction in myocardial infarction by virtue of diagnosing more coronary artery disease and implementing more preventive therapies. The downside is increased use of invasive procedures, which may be appropriate, but because of the excess we need to be cautious that some of them might be unnecessary.”

Making Sense of the MI Finding

The new meta-analysis, which was published October 3, 2017, in JAMA Internal Medicine, included 13 studies, in which 10,315 patients were treated with a primary strategy of coronary CTA and 9,777 with functional testing. The studies included patients with stable and acute chest pain, and the mean duration of follow-up was 18 months.

Overall, there was no difference in mortality or hospitalizations for cardiac causes between patients undergoing coronary CTA and those undergoing functional stress testing. The incidence of subsequent invasive coronary angiography was significantly increased among patients treated with the CTA strategy (RR 1.33; 95% CI 1.12-1.59), an increase that was evident in patients with stable and acute chest pain.

Additionally, the use of coronary revascularization was significantly greater when patients were treated with the CTA strategy (RR 1.86; 95% CI 1.43-2.43), as was the diagnosis of new coronary artery disease (RR 2.80; 95% CI 2.03-3.87). Patients assessed with CTA were also more than two times more likely to receive aspirin and statin therapy compared with those assessed with functional stress testing.

Regarding the MI reduction, Foy called the signal “weak” relative to the increase in downstream procedures. Overall, coronary CTA was associated with a 29% reduction in the incidence of MI compared with functional stress testing (RR 0.71; 0.53-0.96). Approximately 250 patients would need to be tested with CTA to reduce the risk of MI, but more than that, Foy said, the finding did not survive in all the sensitivity analyses they performed.

Moreover, Foy noted that SCOT-HEART involved a unique trial design, so much so that they considered not including it in the meta-analysis. In SCOT-HEART, 85% of patients in the CTA arm also underwent functional stress testing, he said. Finally, he said the reduction in MI with CTA doesn’t line up with the lack of effect on cardiac hospitalizations.

In contrast, Blankstein took a more positive interpretation of the data, arguing the MI reduction is stronger than Foy and colleagues suggest. He pointed out that heterogeneity between clinical trials with respect to the MI finding was not statistically significant (P = 0.58), while there was significant heterogeneity between studies when the researchers analyzed the incidence of invasive coronary angiography (P = 0.004).

Furthermore, Blankstein said the finding is consistent with what has been observed in prior studies. In PROMISE and SCOT-HEART, for example, there were trends toward a reduction in MI with anatomic testing over functional testing, and this result was also shown in a meta-analysis published earlier this year by Danish researchers.

“We think much of this is because of better preventive therapies,” said Blankstein. “CT, by design, can detect plaque not seen by a functional test, which only detects plaque limiting blood flow. So you’re seeing more coronary disease even in cases where it’s not obstructive or flow-limiting. As a result, clinicians are acting on those tests more and prescribing more preventive therapies.”

Although it’s more controversial, in some cases revascularization might also reduce the risk of MI, he said, but this likely plays a smaller role than the increased use of preventive therapy, such as statins and aspirin.

In an editorial accompanying the study, Todd Villines, MD (Uniformed Services University of the Health Sciences, Bethesda, MD), and Leslee Shaw, MD (Emory University School of Medicine, Atlanta, GA), say the meta-analysis supports the recent changes to the NICE guidelines and that CTA should be more broadly available to patients without known coronary disease who present with stable or acute chest pain.

Villines and Shaw also believe the benefits of CTA, such as the reduction in MI, are likely derived from greater use of preventive therapies, as well as the better selection of patients for invasive coronary angiography and revascularization.

Blankstein pointed out there was no trial-mandated algorithm for how to manage patients with a stenosis identified on CTA. “This probably led to more invasive procedures in patients who have intermediate lesions who may not have required such testing,” he said.

Today, however, there is better guidance from professional societies that recommend preventive therapies for all patients with plaque and functional testing for those who have moderate or severe stenoses. The consensus is that many such patients—especially those with a 50% to 69% blockage—should not undergo invasive angiography.

“I think if the trials were done now we would see less use of invasive downstream testing and even greater use of preventive therapies,” said Blankstein.

To TCTMD, Foy said the idea that greater use of preventive therapies in patients with newly diagnosed coronary artery disease is responsible for the reduction in MI is a “reasonable hypothesis,” but noted it’s unproven at this point. He also argued that either imaging modality, whether it’s stress testing or coronary CTA, provides “low value” in that it does little to help manage individual patients. Many of these patients don’t require a CT test to qualify for statin therapy, he said.

“For me, I actually don’t recommend testing low-risk chest pain patients, which are a lot of the patients that were included in the acute chest pain studies,” said Foy. “If you’re going to test, and you feel like you need to, I recommend exercise treadmill testing. If you need an imaging test, I recommend stress echocardiography because I think it’s important to avoid radiation.”

Photo Credit: Used with permission from the Society of Cardiovascular Computed Tomography