The results, which challenge current guidelines and appropriate use criteria, will change practice, several experts agree. 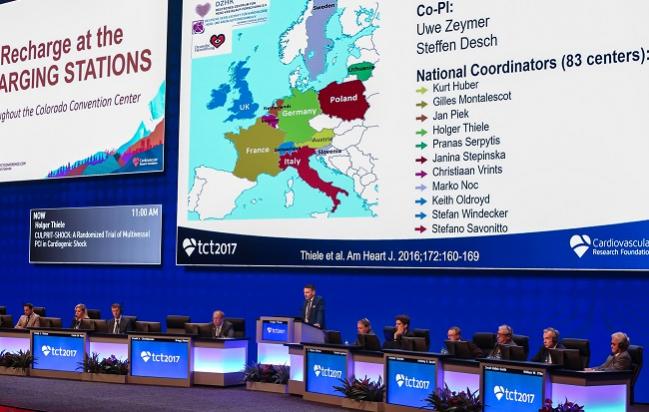 “So keep it simple in patients with cardiogenic shock. Just perform PCI of the infarct-related artery,” Thiele said at a press conference, adding that the findings challenge current guideline recommendations.

European guidelines contain a recommendation to consider immediate PCI of nonculprit lesions in patients with cardiogenic shock. US guidelines don’t make specific recommendations about this, but a recent appropriate use criteria (AUC) document says that it is appropriate to perform multivessel PCI in this patient population if cardiogenic shock persists after treating the culprit lesion.

The CULPRIT-SHOCK results, which were published simultaneously online in the New England Journal of Medicine, appear poised to alter those documents, according to both US and European cardiologists.

Roxana Mehran, MD (Icahn School of Medicine at Mount Sinai, New York, NY), who served as moderator of the press conference, told TCTMD, “I think this trial is going to change all of that,” particularly because the advantage for culprit-only PCI was driven by a reduction in mortality.

She said the majority of these patients currently undergo multivessel PCI, and predicted that CULPRIT-SHOCK will cause the European societies to reevaluate their recommendation and perhaps induce the authors of the US AUC to downgrade the appropriateness level of treating nonculprit lesions in the setting of cardiogenic shock.

Jonathan Hill, MD (King’s College Hospital, London, England), said during a panel discussion at the press conference that the trial will change practice and, in some settings, validates what physicians are already doing. For example, the approach used in the culprit-only arm of the trial is likely already employed in patients presenting in the middle of the night with a nonculprit chronic total occlusion (CTO) lesion, he said.

Still, Hill and others suggested that there could remain a role for immediate multivessel PCI in some patients depending on the complexity of nonculprit lesions. “I think there’s still going to be a proportion of patients where if there is clearly an easy-to-treat second lesion, it’s sometimes hard not to do that.”

Cindy Grines, MD (Northwell Health, North Shore University Hospital, Manhasset, NY), agreed with others in saying that “this is a landmark study and [it] absolutely will change our practice in the US.”

So with this landmark I think we’re going to take a step back and really try to limit the patients who you would treat with multivessel acute PCI. Cindy Grines

Although prior trials suggesting a benefit of multivessel PCI in patients with acute MI caused a shift toward performing more complete revascularization, registries always suggested higher mortality with the approach in the setting of cardiogenic shock, she noted. “So with this landmark trial I think we’re going to take a step back and really try to limit the patients who you would treat with multivessel acute PCI,” she said, adding that there could be a benefit from staged revascularization in certain subgroups. “But right now I would think that we should take a big step back and just try to treat the culprit,” Grines concluded.

It is well established that early revascularization of the culprit artery reduces mortality in patients with acute MI complicated by cardiogenic shock. There remains controversy, however, about whether immediate, more complete revascularization is helpful for patients who have multivessel disease. In theory, opening up relevant nonculprit lesions could improve myocardial perfusion and function, but the more extensive procedure could carry risks of inducing further ischemia, volume overload, and renal impairment stemming from the higher dose of contrast material needed, Thiele et al note.

Designed to help clarify the issue, CULPRIT-SHOCK—conducted at 83 European centers—randomized 706 patients with multivessel disease, acute STEMI or NSTEMI, and cardiogenic shock to PCI of the culprit lesion only during the index procedure, with an option for staged revascularization of nonculprit lesions, or to immediate multivessel PCI.

The reduction in the primary composite endpoint was similar in intention-to-treat, per-protocol, and as-treated analyses, and it was consistent across subgroups, including in one defined by the presence of a CTO in a nonculprit artery.

Additional outcomes, such as recurrent MI, rehospitalization for congestive heart failure, bleeding, and stroke, did not differ between trial arms. There were also no differences in time to hemodynamic stabilization, use of catecholamine therapy or mechanical ventilation, duration of intensive care unit stay, creatinine clearance, or levels of troponin T, creatine kinase, or arterial lactate.

In their paper, Thiele et al say immediate revascularization of nonculprit lesions may not be beneficial due to the higher volume of contrast material needed to perform the more extensive procedure, which could lead to a decline in renal function or acute LV volume overload. In addition, they write, the longer procedure time “may be hazardous at a time when the patient is hemodynamically compromised.”

“Among patients with cardiogenic shock, the acute hazards of a prolonged procedure time (including the increased dose of contrast material) seem to outweigh any potential negative aspects of repeat revascularization,” they conclude.

Culprit-Vessel-Only PCI May Be Better for MI Patients with Multivessel Disease, Cardiogenic Shock

Multivessel CAD in STEMI Patients With Shock: Complete Revascularization or Culprit Only?