In a blow to interventionalists, the results did not show a benefit of the procedure over medical therapy alone. But hope remains. 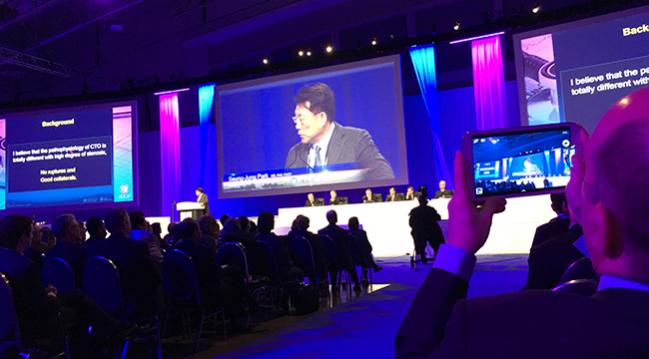 WASHINGTON, DC—The first and only randomized trial of chronic total occlusion (CTO) revascularization versus optimal medical therapy in stable patients has come up empty-handed for PCI, disappointing enthusiasts who had hoped the interventional approach would have the edge.

Critics of CTO PCI have cited its higher complication rate compared with conventional elective PCI and the extraordinarily high level of skill necessary to complete the procedures, plus the fact that it is mainly used to alleviate symptoms in these patients and not reduce cardiovascular events. The EXPLORE trial, which was published in the Journal of the American College of Cardiology last year, showed the safety and feasibility of the procedure a week after primary PCI, but only observational studies have explored clinical outcomes among patients with stable disease.

The DECISION-CTO study presented here yesterday at the American College of Cardiology (ACC) 2017 Scientific Session represents what cardiologists have been calling on for years—a randomized controlled trial of 834 patients from 19 institutions in Asia with silent ischemia, stable angina, or ACS and de novo CTO allocated to either optimal medical therapy or PCI with or without stenting. The trial was designed to demonstrate noninferiority of optimal medical therapy to PCI, with a follow-up duration of 5 years. Researchers led by Park had trouble, however, recruiting enough patients, and the trial was stopped early after 6 years.

CTO PCI success was 91.1% in patients who underwent stenting. At 3 years, the combined primary endpoint of all-cause death, MI, stroke, and repeat revascularization in the intention-to-treat population was similar for patients who received optimal medical therapy alone compared with the interventions (19.6% vs. 20.6%; P = 0.008 for noninferiority). Further, there were no differences in any of the individual outcomes between the study arms through 5 years, no differences through 1 year in quality of life as measured by the Seattle Angina Questionnaire, and no differences among prespecified subgroups.

In a finding that some say warrants further study, however, the noninferiority margin was not met for CTO PCI in the per-protocol and as-treated populations—with those who actually ended up undergoing PCI, regardless of their initial study allocation, having numerically fewer events than those receiving medical therapy.

According to Emmanouil S. Brilakis, MD, PhD (Minneapolis Heart Institute, MN), who was not involved in the study, DECISION-CTO “will have limited impact on contemporary practice.” In an email to TCTMD, he cited what he saw as study design flaws: the lack of clarity regarding how many patients had symptoms/ischemia after revascularization of non-CTO lesions and whether myocardial territories supplied by the CTO were viable at the outset, the almost 20% rate of crossover from the medical therapy arm to PCI, and the trial’s early termination, which limits the power of the results.

“CTO PCI is done in most patients for treating symptoms, usually angina and dyspnea,” Brilakis said. “Hence the patients that should be studied are patients with significant symptoms, and the primary endpoint should be related to patient quality of life.”

Ajay Kirtane, MD, SM (NewYork-Presbyterian/Columbia University Medical Center, New York), who also was not involved with the study, agreed. “At the end of the day, we don’t have definitive evidence that drug treatment in CTOs is associated with an improvement in MACE, but that's not surprising,” he told TCTMD. “This trial showed that there wasn’t really a benefit in terms of quality of life but I think that needs to be more adequately tested, and frankly that ought to be in some respects the primary endpoint of a CTO-based trial. Because that's really what we're trying to do with these patients: we're trying to improve their quality of life.”

Death and MI are likely the “wrong endpoint for stable ischemic heart disease,” added Eric Bates, MD (University of Michigan, Ann Arbor, MI), who argued against CTO PCI in this patient population in a debate held earlier in the meeting. However, “we don’t want to say that this doesn’t work and people shouldn't do it,” he told TCTMD. “It’s disappointing that it didn’t show the benefit that the authors wanted, but it shouldn’t take away from the great advances in equipment and technique and outcome that they've achieved.”

Discussing the study after the presentation, panelist David Kandzari, MD (Piedmont Heart Institute, Atlanta, GA), said DECISION-CTO might have been better designed to judge superiority of CTO PCI compared with medical therapy. This would have accounted “for the greater likelihood of crossover to revascularization as exemplified in today's clinical practice,” he suggested.

Flaws aside, Kirtane said the study should raise caution for “people who were overzealous about opening up CTOs because they were closed.” Patients should be “treated for the right reasons,” he continued. “If I’m referred a CTO from the outside, I meet the patient in the office or spend time on the phone with them discussing with them exactly what we're planning on doing and what the risk and benefits are before proceeding with doing it. We don't take that extra step besides the informed consent on the day of the procedure for elective PCI always, but for CTO PCI certainly we do that because the risks are higher.”

As techniques and technology have improved, operators are “potentially more apt” to perform CTO PCI if they have the skills today, Kirtane said, but he estimated that there are still “a fair number of CTOs in patients who have refractory symptoms that are not getting treated.

“So the question is: do we need randomized trial evidence to show that we can really improve symptoms in these patients?” he asked. “We might actually.”

What is most disappointing about DECISION-CTO, Kirtane concluded, was not the idea but that “sometimes a methodologically flawed trial can lead to more negative [feelings] than are potentially warranted. But the upside of that is that sometimes a trial like this can prompt a well-designed trial that hopefully could answer the question definitively.”

Bates said that further research should be targeted to more specific subsets of patients or lesions, and noted that there is “plenty of reason to keep pursuing improvement.” However, “the message to the general reader ought to be that this is a specialized procedure like TAVR, [and] I wouldn't support the average US cardiologist taking on some of these cases if they aren’t properly trained and proctored and achieving 90% success rates.”

2 years ago
If you notice, there were the same number of patients in the OMT and PCI groups with multivessel disease (73.9% vs 73.3%). Yet, “numerically,” just about the same number of stents were used in both groups (2.0+/-1.4 vs 2.4+/-1.3). If you assume 1.0 stents per CTO and 1.0 stents per non-CTO, then fewer lesions were treated in the CTO group vs the OMT group. This issue becomes even more exaggerated if you assume a more reasonable 1.5 stents per CTO.

DECISION-CTO: Optimal Medical Therapy With or Without Stenting For Coronary Chronic Total Occlusion