A hybrid approach of one radial and one femoral might be an even better option for maximizing safety and minimizing procedure time, an expert says. 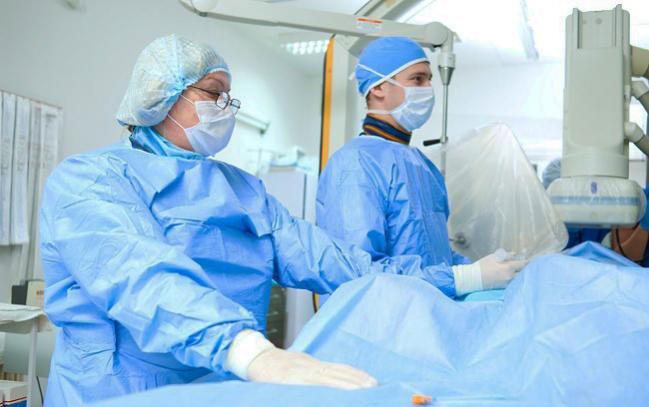 While transradial access for PCI in some patients with chronic total occlusions (CTOs) may be possible, new research suggests that the transfemoral approach should be the default access route for these complex lesions.

Transradial PCI has become a hot topic among interventionalists in recent years with proponents lauding its safety and reduced bleeding rates compared with transfemoral access. However, CTOs are among the most complex lesions treated in the cath lab, and minimal data exists to support fully going through the wrist in these patients.

In a single-center series comparing radial versus femoral access among 508 patients with CTOs over 10 years, researchers led by Yutaka Tanaka, MD, PhD (Shonan Kamakura General Hospital, Japan), found that overall technical success was similar between the two methods (74.6% vs 72.5%; P = 0.51), but there were differences when patients were broken down by lesion complexity.

In patients with the most severe lesions (J-CTO score ≥ 3), technical success was lower for those treated transradially than for the transfemoral group (35.7% vs 58.2%; P = 0.04). Failed cases in general were more likely to occur in patients with moderate or severe calcification, occlusion length > 20 mm, absent stump, and a J-CTO score ≥ 3. Additionally, operators in these failed cases were more likely to have used a guiding catheter size smaller than 7 Fr, which was used in 90.7% of all the transradial cases.

Fluoroscopy time and use of contrast media were both lower in patients treated with the transradial approach, and no cases of access-site related bleeding were observed in these patients. Comparatively, access-site bleeding occurred in nine patients (3.0%) in the transfemoral cohort. Technical success, composite procedural complications, and contrast media outcomes were all confirmed in a propensity score-matched analysis.

The results were published in the February 13, 2017, issue of JACC: Cardiovascular Interventions.

What About the Hybrid Approach?

“These results suggest that the transradial approach may be feasible for the treatment of noncomplex CTO, although complex CTO may still pose a technical challenge,” according to Tanaka and colleagues. “If possible, guiding catheter size ≥ 7 Fr should be selected, regardless of lesion morphology. Moreover, the transfemoral approach should be preferentially considered for CTO, particularly in cases with moderate or severe calcification.”

Although he understands the point of view of the authors, Robert Yeh, MD (Beth Israel Deaconess Medical Center, Boston, MA), who was not involved in the study, told TCTMD that there are more options than simply transradial or transfemoral. Of his CTO patients undergoing PCI, he estimates that about 80% of them are treated with some sort of hybrid method.

Although his approach is constantly evolving, Yeh said he only performs biradial CTO PCI when he is concerned about access issues in the groin or bleeding “because I find that we get a little bit less support from the radial approach than the transfemoral and I think that becomes particularly important if the patient can't take an 8-Fr guide, for example, on a radial. So it’s often the case that it’s one groin and one radial.” But even on cases where his team fails to deliver a microcatheter retrograde, “the retrograde radial approach is often coupled with liberal use of guide extension catheters to help provide more support,” he said.

Failed transradial procedures often plague him with regret afterward. With every radial failure, the proportion of patients he treats even with a hybrid approach tends to decrease, Yeh noted.

In an accompanying editorial, Stéphane Rinfret, MD, and Rustem Dautov, MD, PhD (McGill University, Montreal, Canada), write similarly that there remains a setting for both radial and femoral PCI in patients with CTO lesions. “The debate of comparing radial with femoral for CTO PCI is somewhat passé, because both approaches offer advantages and limitations that need to be understood,” they say.

And this study is not a perfect example of comparing the two anyway “because operators selected radial and femoral approaches prospectively in different circumstances,” according to the editorialists. “Trying to discriminate criteria that favored radial or femoral is difficult, and use of a propensity score unsatisfactorily accounts for such factors.”

Looking to the future, Yeh said comparing various access methods in CTO PCI would be “a study that would be really amenable to randomization” and “maybe something that we should consider.”

The biggest challenge to such a study would be the rapid evolution of technology, he observed. “Even during the course of a study you could find that your results are not really applicable anymore because of the improvements in guide extension, microcatheter, etcetera,” Yeh said. Such a study would be helpful in examining different endpoints, though, such as bleeding and procedural time.

2 years ago
Please refer to this article recenty published in Circulation CV Interventions from our group: http://circinterventions.ahajournals.org/content/10/9/e005255 In our article transradial approach seems feasible even in complex CTO PCI.