A chorus of interventionalists all agreed that BMS have an extremely limited role, if any, in clinical practice following results of several studies. 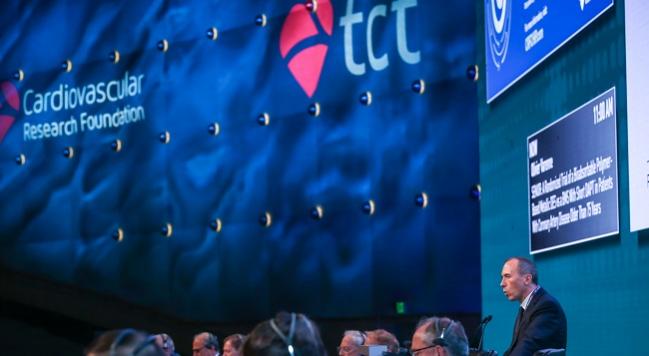 DENVER, CO—The use of a drug-eluting stent with a bioresorbable polymer in elderly patients with stable and unstable coronary artery disease significantly reduces the risk of major adverse cardiovascular events when compared with use of a bare-metal stent, even when DAPT use is the same between groups, according to the results of the SENIOR study presented today at TCT 2017.

The reduction was driven primarily by a large decrease in the risk of ischemia-driven TLR, but trial investigators, as well as other experts, say the overall findings are yet more support against using BMS in clinical practice.

“I really strongly believe that bare-metal stents should no longer be used, at least as a strategy to reduce the duration of [dual antiplatelet therapy (DAPT)] in elderly patients,” lead investigator Olivier Varenne, MD (Hôpital Cochin, Paris, France), told the media during a press conference where he presented the results.

Dean Kereiakes, MD (The Christ Hospital, Cincinnati, OH), who was not involved in the study, agreed wholeheartedly. “We now have at least four clear-cut randomized trials where bare-metal stents are less safe and less effective.”

Additionally, Gary Mintz, MD (Cardiovascular Research Foundation, New York, NY), the chair of the morning press conference, said that DES should be used in 99.99% of clinical situations. “Perhaps, if you could give a bare-metal stent without any dual antiplatelet therapy, then perhaps you’d have a different paradigm, but you can’t do that either,” he said.

Speaking with the media, Varenne said physicians frequently encounter elderly patients in practice and these individuals are often challenging to treat. In many institutions, elderly patients still receive BMS as a strategy to reduce the duration of DAPT and mitigate the risk of bleeding.

“In 2016, which are the most recent numbers, 25% of PCIs in the US are performed in patients 75 years and older,” Varenne told TCTMD. “It’s really an increasing population. They’re a population that is at high risk of bleeding and they have severe coronary artery disease. Usually it’s complex disease, diffuse disease, severe lesions, and they have a lot of risk factors and comorbidities. You need to find the threshold between bleeding and ischemic complications.”

In the present study, investigators treated 596 patients with the platinum-chromium everolimus-eluting stent with a bioresorbable polymer (Synergy; Boston Scientific) and 604 patients with latest-generation BMS. Slightly more than half of patients had a stable condition, such as stable angina and silent ischemia.

In terms of DAPT, 1-month treatment was planned for patients with stable coronary disease and 6 months for the remaining patients who underwent PCI for STEMI, NSTEMI, or unstable angina. Roughly 20% of patients continued to take DAPT to 12 months, with no difference in between the two treatment groups.

Commenting on the study for TCTMD, Arnold Seto, MD (Long Beach VA Medical Center, CA), said his use of BMS is less than 5%, with those devices implanted in patients with recent bleeding or a planned operation within 30 days. But even in that latter group, Seto said he will sometimes use DES and then stop DAPT at the time of the surgery.

“The highest risk of stent thrombosis is in that first month,” he said, noting the risk is around 1% in the first 30 days and 1% over the remainder of the year. In the SENIOR trial, the 12-month rate of stent thrombosis was 0.5% in the DES arm and 1.4% in the patients receiving BMS (P = 0.13).

Overall, SENIOR confirms previous findings—from OPTIMIZE and a previous network analysis—that suggested DES are associated with a lower risk of stent thrombosis compared with BMS, said Seto. “Even with the same amount of DAPT coverage—1 month for the stable angina patients and 6 months for the ACS patients—they were able to convincingly show a difference in the primary endpoint.”

Kereiakes pointed out that the absolute reduction in major adverse cardiovascular and cerebrovascular events is likely even greater with Synergy compared with the BMS arm. In the trial, stroke rates trended higher with the bioresorbable-polymer DES (2.0% vs 0.8%), but there is no plausible pathophysiological explanation for this finding.

“If the stroke rates were equal, the absolute difference between the devices wouldn’t be 4.8%, it would be 6.0%,” said Kereiakes, referring to the overall primary endpoint. “I think, due to the play of chance, stroke was a little higher in the Synergy group. It minimized your 29% reduction in the primary endpoint. So, I think the results [may be] even better.”

When the trial was designed in 2014, Varenne said patient age (> 75 years) was the primary factor when deciding if they should use bare-metal stents, adding that they are no longer using the devices. “In the last 4 months, we haven’t implanted a single BMS in my lab,” he said.

Elvin Kehdi, MD (Isala Klinieken Zwolle, the Netherlands), who was not involved in the study, said they no longer use BMS either, a decision made following the LEADERS-FREE study with the BioFreedom polymer-free drug-coated stent. “The body of evidence is being built every day that there is no longer any use of bare-metal stent,” said Kehdi.

Similarly, David Muller, MBBS, MD (St. Vincent’s Hospital, Sydney, Australia), said he no longer uses BMS, although the cost differential remains a concern with hospital administrators in Australia. “I think it’s very valuable to have these data,” he said. “We’re always having to justify the fact that we’re using drug-eluting stents instead of bare-metal stents and this helps support that.”

For Seto, the ability to reduce DAPT duration to as little as 1 month in stable patients undergoing PCI with the Synergy device and 6 months in those with ACS is “very exciting.” While US guidelines recommend 12 months of DAPT for patients with ACS, clinical practice is ahead of the guidelines, he added, with most physicians moving towards 6 months of treatment.

In his practice, if the patient has any bleeding risk at all, they attempt to keep DAPT duration as short as possible. Age alone, while a risk factor for bleeding, is generally not enough to guide their decisions, though. “There are 85-year-old patients who stay on DAPT because they’ve never even had a bruise or a nosebleed, and I’m concerned about the ischemic risk,” said Seto.

RECAP: In the Cath Lab, a Lead-free Pad Placed on the Patient Cuts Operator Radiation Exposure