Operators should use imaging to identify high-risk patients and refine their use of anticoagulants when possible, experts say. 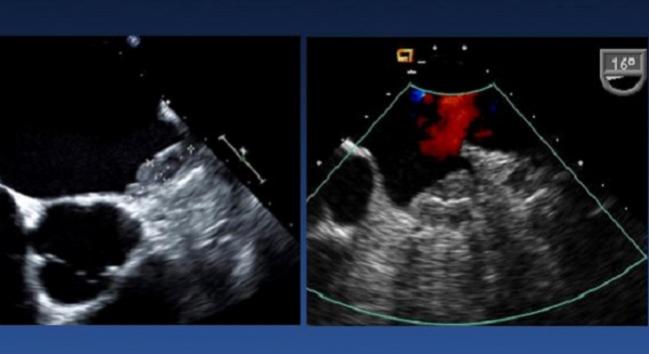 Device-related thrombus (DRT) following percutaneous left atrial appendage (LAA) closure seems to be an infrequent but serious complication that is associated with an increased risk of ischemic stroke and death.

Authors of a prospective multicenter registry study as well as those of an in-depth review of the literature, both published online this week in JACC: Cardiovascular Interventions, agree that future research looking at the role of antithrombotic therapy after LAA closure, and at how the procedure itself might be fine-tuned to minimize suboptimal device implantation, will lead to even better outcomes down the line.

“DRT remains one of the Achilles’ heel of LAA closure, and device imaging surveillance should be routinely performed to aid diagnosis and management of DRT, since it is associated with higher thromboembolic risks,” write Jacqueline Saw, MD (Vancouver General Hospital, Canada), and colleagues at the conclusion of their review paper.

In the past, DRT after LAA closure might not have been paid much attention, Adel Aminian, MD (Centre Hospitalier Universitaire de Charleroi, Belgium), who led the registry study, told TCTMD. However, “this is not a benign clinical entity [anymore], it's something serious,” he stressed.

Aminian and colleagues looked at 1,088 A-fib patients who received the Amplatzer Amulet device (Abbott) to close their LAA as part of a postmarket study. The found a 99% device-implantation success rate, with 1-year follow-up done in 96.3% of patients.

DRT occurred at a rate of 1.7% per year—17 patients reported the complication, of whom one developed two instances. Among those with DRT, 82% did not have their left upper pulmonary vein (PV) ridge covered by the Amulet disc, indicating suboptimal implantation. Three DRT patients developed ischemic stroke all within 3 months of the procedure (18.3% per year).

The 1.7% annual rate of DRT is “reassuring,” said Aminian, especially given that prior researchers have reported this finding to be as high as 25%. Also, the fact that so many of the DRTs were found where they were means that “maybe optimization of device implantation could be a future target to prevent this rare but serious complication.”

Sameer Gafoor, MD (Swedish Heart and Vascular Institute, Seattle, WA), who was not involved in the study also stressed a degree of reassurance with these findings. “Knowing that this comes at 1.7% per year is great, because it is showing that this is a technology which is not just mature but is safe. [It] is something where we have a known incidence of a problem that is not only just a low number but also something that is treatable,” he told TCTMD.

“The large study size, prospective enrollment, use of a clinical events committee, and high degree of echocardiographic follow-up lend strength to their findings, particularly when compared with earlier studies of DRT in non-Watchman implants,” writes Matthew J. Price, MD (Scripps Clinic, La Jolla, CA), in an accompanying editorial. “Aminian et al’s results provide a degree of comfort that Amulet LAA closure is associated with a low rate of DRT in a cohort of well-followed patients predominantly treated with antiplatelet therapy post-implantation. Their results also suggest that Amulet operators should be cognizant to try and cover the pulmonary venous ridge with the proximal disk of the device, if possible.”

However, he notes that “the rate of DRT is likely underestimated due to detection bias, as imaging follow-up was not performed in 10% of cases, 41% of the DRT events were identified at the time of ‘ad hoc’ imaging, and 52% of the patients with stroke did not have a [transesophageal echo (TEE)] at the time of the thromboembolic event.”

Saw also highlighted the value of the paper by Aminian and colleagues. “It adds important data on the incidence of DRT with real-world usage of the device that includes antiplatelet therapy administered in ~70% of cases post-LAA closure,” she told TCTMD in an email. “Such low incidence of DRT is reassuring, [especially since oral anticoagulation] was not administered in the majority of these patients post-LAA closure. This study also sheds light on mechanical reasons that may contribute to DRT (incomplete coverage of the PV ridge). However, the authors did not scrutinize implant characteristics in patients without DRT, [so] it is not possible to be definitive about these predictors.”

Taking a broader look at the predictors of DRT, Saw and colleagues say that four patient-specific factors seem relevant:

Imaging will likely be the key to identifying these patients before a thrombus forms. “In the clinical setting, most centers perform TEE at 6-12 weeks and only repeat the TEE in cases of abnormal findings (significant residual leaks > 3-5mm, thrombus, device malposition/displacement),” they write. “Consideration should be given to potential high-risk features for thrombus formation at the time of implantation and follow-up imaging. These include dense spontaneous echocardiographic contrast or an associated low-flow state including severe LV dysfunction, and regions of trabeculation that remain exposed post-LAA closure. Such high-risk features should prompt additional late TEE imaging at 6-12 months.”

The US Food and Drug Administration’s label for the Watchman LAA closure device (Boston Scientific) requires TEE to be performed at 45 days and 12 months, with warfarin being recommended until any observed thrombus is resolved on TEE. “We support this recommendation, with the flexibility of performing the first surveillance imaging at 6-12 weeks (preferably after cessation of [anticoagulation/dual antiplatelet therapy] to allow detection of DRT after stepdown of antithrombotic therapy),” write Saw et al.

For the management of DRT, they recommend warfarin for 8 to 12 weeks if the patient isn’t already on oral anticoagulation and, for those who are, intensifying the INR to 2.5-3.5. Low-dose aspirin may also be added if the bleeding risk is low, and the use of full dose non-vitamin K oral anticoagulant (NOAC) “may also be considered” for 8-12 weeks. Repeat TEE or CT imaging should be conducted to document thrombus resolution before stopping antithrombotic treatment, the authors add.

The main message to operators is device-related thrombus is low, and suboptimal device implantation is a predictor of this. Sameer Gafoor

In an editorial accompanying the review paper Gilles Montalescot, MD, PhD, and Paul Guedeney, MD (Centre Hospitalier Universitaire Pitié-Salpêtrière, Paris, France), underscore the importance of these recommendations. “The diagnosis of DRT will require anticoagulation for a period of at least a month exposing these patients to potential life-threatening bleeding,” they write. “Thus, the cure may become worse than the disease if DRT is not adequately prevented by an antithrombotic treatment that may be tolerated by these patients.”

But for those not eligible for oral anticoagulation, Montalescot and Guedeney write that “monotherapy of NOAC, with a full or reduced dose [and] without the association of antiplatelet therapy, may represent a better solution for these patients with prior severe bleeding.”

While it is unlikely that every patient who has suboptimal device implantation is at risk for DRT and likely that there are “more important risk criteria in certain select patients,” Gafoor said, the available evidence should “make us more vigilant about implantation at the time of the procedure.”

He also noted the importance of relying on preprocedural imaging to help screen patients who might be more at risk for DRT, and said the current data can help with patient education as well as the creation of new devices.

“Device design iteration and the optimization of technical results will hopefully reduce the rate of the DRT and improve clinical efficacy, thereby providing further support for LAA closure in a broad range of patients with A-fib,” Price concluded.

“The main message to operators is device-related thrombus is low, and suboptimal device implantation is a predictor of this,” Gafoor summarized. “Therefore, spend time getting the right implant at the right time for the best long-term outcome. That's really it.”

In the Wake of Guidelines, Antibiotic Prophylaxis for Infective Endocarditis Declined for Moderate-Risk Patients