Cardiologists can play a role in stemming the “consultation cascade” from unnecessary tests in low-risk patients, one expert says. 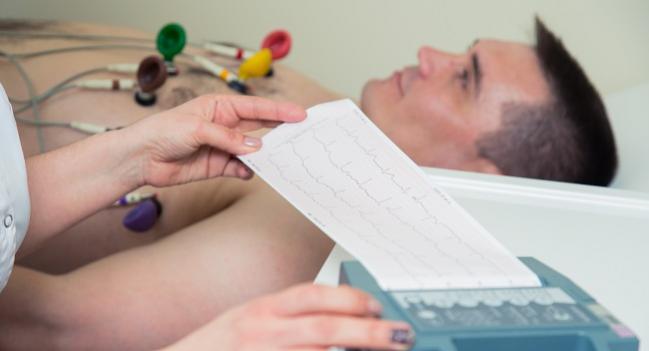 Despite strong recommendations that low-risk, asymptomatic patients should not be getting electrocardiograms, a high proportion of patients are still being sent for ECGs as part of their annual health exam, new research shows. While primary care physicians are the ones ordering these tests, one expert believes that cardiologists have an important role to play in slowing or halting the “consultation cascade.”

“Most of us who do ambulatory cardiology probably see patients that are referred to us because they've had an abnormal ECG . . . that showed some finding that was likely benign,” R. Sacha Bhatia, MD, MBA (Women’s College Hospital, Toronto, Canada), told TCTMD.  “We can always communicate that back to the family physician at an individual level and sort of say: routine testing in this patient wouldn’t be all that useful for these reasons.”

Ordering annual ECGs in patients at low risk for cardiovascular disease who have no symptoms is one of the five “should be questioned” tests in Canada’s Choosing Wisely campaign. In the United States, the United States Preventive Services Task Force (USPSTF) recommends against routine ECG screening in low-risk patients. Routine ECGs as part of preoperative or preprocedural evaluations in low-risk, asymptomatic patients are also among the five tests on the American College of Cardiology’s Choosing Wisely list. Yet despite those recommendations, research conducted in US Medicare patients as well as among US patients covered by private insurance continues to document high rates of ECGs being done in these patients, the authors say.

Bhatia and colleagues chose to examine whether the same ECG patterns were seen among patients covered by a single, public payer. Looking at administrative healthcare databases in Ontario, Canada, between the years of 2010/2011 and 2014/2015, they found that of more than 3.6 million patients who had at least one annual health exam during this period, 21.5% also had an ECG within 30 days.

The rate at which patients were being sent for an ECG varied widely—ranging from 1.8% to 76.1% among the different primary care practices, and from 1.1% to 94.9% among the individual 8,036 physicians. Patients sent on for ECGs were more likely to be older, living in urban areas, and to have other chronic diseases. Physicians who commonly ordered ECGs were more likely to be male, to have been in practice for at least three decades, and to hold international medical degrees.

Even though this may be something that many people would think is quite trivial, we've actually shown that it's maybe not as trivial as we originally thought. R. Sacha Bhatia

“When you're in training you're learning the latest guidelines, so I think probably physicians who have been farther away from their [training] probably still practice a certain away and that might include doing more routine testing,” Bhatia said. “Now that Choosing Wisely, which has been around for a few years, it is permeating medical education [and] physicians who are newer to practice have probably learned those guidelines and have learned how to practice in a different way.”

Asked whether he and his co-investigators would be contacting the physicians who had the highest ECG ordering rates, Bhatia stressed that the numbers they analyzed were from aggregate administrative data, all of it anonymized, “so I don't know who those doctors are. I leave it to health policy makers to sort of do with the data as they'd like, but I certainly think there are opportunities if policy makers are interested.”

Bhatia and colleagues also didn’t look at costs, although he pointed out the fact that cost considerations include not only the almost 800,000 ECGs themselves, but also the additional tests and consults that follow. In all, 5.3% of the entire cohort had a cardiac consultation, test, or procedure within 30 days of their check-up. These included more than 36,000 consults with a cardiologist or cardiac surgeon, more than 83,000 echocardiograms, almost 43,000 stress tests, and over 15,600 nuclear stress tests, and 1,830 cardiac catheterizations.

“When we talk about appropriateness, we're often focused on the really big expensive tests, angiography, ICD implantation, nuclear stress testing, etc,” Bhatia said. “But I think what's interesting about this study is that very small, simple, innocuous things can lead us down a path to perhaps bigger and more expensive things.  So even though this may be something that many people would think is quite trivial, we've actually shown that it's maybe not as trivial as we originally thought.”

Critically, however, overall rates of adverse clinical outcomes were very low in both groups. “In a data set of over 3.6 million patients, we show that the rate of actual cardiac morbidity in terms of mortality, revascularization, or hospitalization is extremely low in both cohorts, so it does not seem that this type of strategy of routine test-ordering actually has an impact,” Bhatia said. “I think people can feel fairly reassured that not doing ECGs in this low-risk cohort does not seem to have an impact on those hard cardiac outcomes.”

As for how cardiologists can help to do a better job communicating the non-necessity of these tests to referring physicians, Bhatia, himself a cardiologist, suggested that the message should be as much about what physicians can do for their patients—things like optimizing primary prevention and checking risk factors—as about what they ought not do. “I think that approach goes a long way to sort of building that trust and rapport between cardiologists and family doctors that hopefully will create a little more rational testing environment,” he said.

Of note, the study did not have access to actual ECG results to determine the proportion of cases in which referrals and additional testing were actually warranted. Asked whether these data from Ontario, with a single, public payer, could be extrapolated to other jurisdictions, Bhatia said that, having done a lot of “appropriateness” research, he believes many of the “behaviors that clinicians have are not specific to countries or payment plans. I think it's just sort of the way we practice medicine.” And with ECGs specifically, “this is one that I don't believe is driven by financial incentives,” he said. “I think it's driven by a number of reasons, including the way that we practice medicine, habit, fear of things like litigation, and patient preferences.”

PROMISE Analyses: Coronary CTA May Hold Some Benefits for Patients With Suspected CAD