ERADICATE-AF: Could Add-on Renal Denervation Give A-fib Ablation a Boost?

“I don’t think we should generalize this and say we should start doing this routinely, but it’s certainly pretty intriguing,” Ajay Kirtane says. 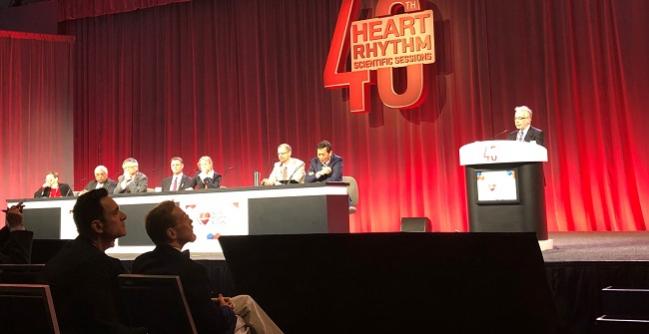 SAN FRANCISCO, CA—Renal denervation continues to make a comeback as a blood pressure-lowering therapy years following the disappointing results of the SYMPLICITY HTN-3 trial, and now new randomized data from the ERADICATE-AF trial suggest that the procedure could have antiarrhythmic effects when performed in hypertensive patients undergoing A-fib ablation.

Though performing renal denervation increased procedure time by about 23 minutes, there was no significant increase in complications (4.5% vs 4.2%), which were mostly vascular issues that did not require an intervention.

“Renal denervation is reasonable to employ to increase the success rate of AF ablation in patients with hypertension,” Steinberg concluded.

The idea that renal denervation can improve the efficacy of PVI has been talked about for a long time based on the fact that A-fib is believed to be sympathetically mediated, he said. The challenge in interpreting this study, he added, relates to the fact that standard A-fib ablation catheters—and not specialized renal denervation systems—were used to ablate the renal nerves in nearly all cases, raising questions about the safety of an approach that is not optimized for that purpose.

“I don’t think we should generalize this and say we should start doing this routinely, but it’s certainly pretty intriguing,” Kirtane said. “And it is a randomized trial, so it’s nice to see this type of an effect.”

Steinberg pointed out that renal denervation has been shown to have an impact on the autonomic nervous system—reducing central sympathetic outflow—and thus might have an antiarrhythmic effect. ERADICATE-AF was designed to confirm findings from a previous pilot study, which showed a reduction in A-fib recurrence when renal denervation was added to PVI.

The trial, conducted at three centers in the Russian Federation and one each in Poland and Germany, randomized 302 patients who had symptomatic paroxysmal A-fib, significant hypertension (systolic BP of ≥ 130 mm Hg and/or a diastolic BP of ≥ 80 mm Hg while taking one or more antihypertensive medications), and a referral for A-fib ablation.

I think there’s lots of us who became a little cynical with how the renal denervation story played out, and I think this sort of restores the question about whether there’s merit in this mechanism of intervening. Andrew Krahn

PVI was performed using a 28-mm cryoballoon (Arctic Front Advance; Medtronic), with ablation confirmed using a multielectrode mapping catheter. Cavotricuspid isthmus ablation was performed if there was a history of flutter or if it was induced in the laboratory.

Patients in the two arms were well matched at baseline, with a mean age of about 60. Roughly 60% were men, and the mean A-fib duration was 3.6 years. Average BP was about 150/90 mm Hg in both groups on a median of two antihypertensive agents.

Serving as a discussant after Steinberg’s presentation, Cara Pellegrini, MD (University of California, San Francisco), said: “I was really quite impressed that, despite the added complexity of an extra procedural component, there appeared to be virtually no added risk [from] this in the intervention group.”

She calculated that the number-needed-to-treat for A-fib recurrence through 1 year was just six patients. “And I think that that’s pretty remarkable, actually, on top of the pulmonary vein isolation procedure already,” Pellegrini said.

Even though the recurrence rate was lower following renal denervation, it was still common, noted Pellegrini, who also pointed out that on average patients did not achieve BP control according to the most recent US guidelines.

“Nonetheless, I think that these results are quite exciting,” she said. But some open questions remain, Pellegrini indicated, regarding the impact of renal denervation in patients with persistent A-fib or more enlarged atria and in those with less severe disease or without hypertension. There are also questions about the long-term efficacy and safety of the procedure, she said.

In comments to TCTMD, Andrew Krahn, MD (University of British Columbia and St. Paul’s Hospital, Vancouver, Canada), one of the chairs of the late-breaking clinical trial session where Steinberg presented the results, said: “I think there’s lots of us who became a little cynical with how the renal denervation story played out, and I think this sort of restores the question about whether there’s merit in this mechanism of intervening.”

Still, there’s a question about how much of the benefit seen here is due to neuromodulation by renal denervation and how much is due to the reduction in BP, which might have been achieved simply by better optimizing medical therapy.

“This was a huge blood pressure effect, which I would expect to have a big impact just like weight loss and other parameters do on atrial fibrillation,” Krahn said, pointing out that the study was conducted in a healthcare environment that differs from that in North America. “It occurred in the absence of what I would think would be due diligence for the control arm and their blood pressure control, and so there’s a whole bunch of work to be done to say that it’s that particular component of it [renal denervation] that resulted in the change in outcomes.”

Krahn said he doesn’t think ERADICATE-AF is a practice-changing trial. “I’m cynical about this being the answer,” he said. “I’m more optimistic that they need medical optimization before we start doing invasive things.”

Asked after his presentation about the clinical applicability of the results, Steinberg responded: “On the basis of the studies that I’ve been involved in, several in AF and also for [ventricular tachycardia/fibrillation], the renal denervation procedure seems to be remarkably safe and seems to be accomplishable in the skilled hands of electrophysiologists . . . . In my mind, I think it is ready for a clinical application, assuming individual institutions can mount this kind of program.”

Kirtane was not ready to consider this for clinical implementation, but said it was worthy of further study. “Seeing this type of data in a randomized trial is corroborative and suggests that we really could potentially help patients that have symptomatic atrial fibrillation in terms of increasing the efficacy of their pulmonary vein isolations,” he commented.

HRS Urges Members to Get Aboard the Digital Health Train