Even With PSP, Bioresorbable Scaffold Falls Short in COMPARE-ABSORB and ABSORB IV Trials

Better technique helps to some degree, but the evidence remains consistent that the Absorb device carries a higher risk of scaffold thrombosis and MI.

SAN DIEGO, CA—Despite no longer being commercially available, clinical data from the Absorb bioresorbable vascular scaffold (BVS; Abbott Vascular) continues a disappointing course, leaving cardiologists to speculate on the future of bioresorbable technology for the treatment of patients with coronary artery disease.

In this high-risk group, treatment with Absorb was associated with an increased risk of target-vessel MI when compared with the Xience stent (4.0% vs 2.1%; HR 1.96; 95% CI 1.10-3.51) at 1 year. Regarding thrombotic events, the rate of definite/probable stent/scaffold thrombosis occurred in 2.0% of the Absorb-treated patients and 0.6% of the Xience patients (HR 3.32; 95% CI 1.22-8.99). Overall, 76% of the reported definite/probable scaffold thromboses with Absorb occurred within 10 days of the procedure.

“Diabetic patients, multivessel-disease patients, and those with complex lesions have the worst, the steepest, rate of target lesion failure in the long term,” said Smits in reference to COMPARE-ABSORB patient population. In an attempt to “bend” or “flatten” that event curve, Smits told TCTMD that a bioresorbable scaffold would avoid the potential stimulus caused by the metal stent in the artery. The promise of the bioresorbable scaffold is enhanced vessel healing and a lowering of the late event rates associated with drug-eluting stents.

“We thought these patients might benefit more than a simple lesion, where a metal stent performs quite well and already has a lower event rate,” said Smits.

Gregg Stone, MD (NewYork-Presbyterian/Columbia University Irving Medical Center, New York, NY), who headed up the global ABSORB program and presented data from ABSORB IV during the late-breaking session, said the rate of target lesion failure is 2-3% annually for metallic drug-eluting stents. Like Smits, Stone said the benefit of bioresorbable scaffolds is not within the first 3 years, but in the long term when the scaffold has vanished and the artery hopefully returns to normal functioning.

Speaking during a morning press conference at TCT 2018, Smits explained that COMPARE-ABSORB is unique in that investigators employed the so-called “PSP” protocol for optimal implantation techniques. Predilatation and high-pressure postdilatation was mandatory, and IVUS or optimal coherence tomography (OCT) was recommended for the treatment of target vessels smaller than 2.75 mm.

Overall, there was no significant difference in the risk of target lesion failure—a composite of cardiac death, target-vessel MI, or clinically-\ indicated target lesion revascularization—between the two devices (5.1% with Absorb vs 4.2% with Xience; HR 1.24; 95% 0.79-1.94). However, despite the optimal implantation practice, there were substantially increased risks of thrombotic events among the Absorb-treated patients.

Azeem Latib, MB, BCh (EMO-GVM Centro Cuore Columbus, Milan, Italy), highlighted the scaffold thrombosis risks, noting that the risk was essentially flat once beyond the first 10 days. “What this highlights for me is that with this first-generation device, it requires a lot of hard work to implant it properly to prevent scaffold thrombosis,” he noted during a morning press conference. “It’s very dependent on the technique.”

While the outcomes might have been improved with greater use of IVUS and OCT—rates in the trial were still low at 40%—Latib said future-generation scaffolds really must be easier to implant than Absorb.

David Cohen, MD (Saint Luke’s Mid America Heart Institute, Kansas City, MO), who was not involved in the study, said the excessive risk of scaffold thrombosis with Absorb compared with Xience is “consistent with every single study that’s been done now.” Speaking during the press conference, Cohen said that while investigators and physicians have learned lessons about how to properly implant the Absorb scaffold, “it still doesn’t overcome whatever issues there are with the technology.”

The potential benefit of the bioresorbable scaffold technology lies down the road, beyond 5, 7, or 10 years, but right now there is no evidence of benefit. “It’s hard to sell promise,” said Cohen. “And as a physician, it’s hard to do something for a promise when so far there’s absolutely no evidence that it’s realized. We need that evidence.”

The patients in COMPARE-ABSORB had a high risk for restenosis, such as diabetes and/or multivessel disease. The lesions were also considered complex, with lengths greater than 28 mm. The investigators randomized patients with small vessels, those with a reference vessel diameter between 2.25 and 2.75 mm. Absorb, which is no longer commercially available, was approved for patients with a reference vessel diameter 2.5 mm to 3.75 mm and lengths 24 mm or less. To TCTMD, Smits said that when they became aware of the risks of thrombosis among patients with vessels smaller than 2.25 mm, they altered the study protocol to include only patients with vessels 2.5 mm or greater.

In the same late-breaking trial session, Stone presented data from the blinded, randomized ABSORB IV and also highlighted the improved implantation techniques in the trial. 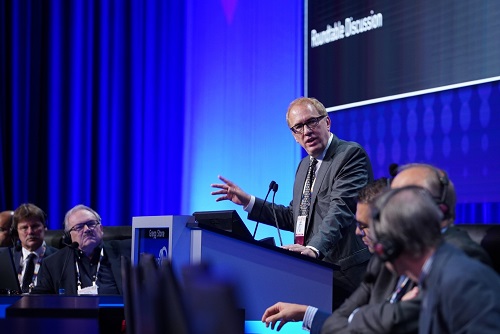 In the study, which included 2,604 patients randomized to treatment with Absorb and Xience, the rate of target lesion failure rate at 30 days was 5.0% with Absorb and 3.7% with Xience, a nonsignificant difference. At 1 year, the rate of target lesion failure was 7.8% in the patients assigned to Absorb and 6.4% in patients treated with Xience, a difference that was not statistically significant. There was no difference in device thrombosis rates at 30 days or 1 year, but there were numerically higher events among the Absorb-treated patients (0.7% vs 0.3%; HR 2.28; 95% CI 0.70-7.40).

Stone reported that just 3.0% of patients in the trial had vessels with a reference diameter less than 2.25 mm. “This substantially reduced the scaffold thrombosis rate with BVS,” said Stone. “It also reduced the rate with the cobalt-chromium [Xience] everolimus-eluting stent,” said Stone. “Better technique, better patient selection actually can improve outcomes with the metallic drug-eluting stents.”

Despite better patient and lesion selection in ABSORB IV, as well as the inclusion of troponin-positive ACS patients and improved techniques, the rate of MI, ischemia-driven target lesion revascularization, and scaffold thrombosis at 30 days and 1 year still favored Xience. “These data are largely consistent, although a little better, from those of the earlier ABSORB trials,” said Stone.

Some Not Convinced BRS is the Future

Deepak Bhatt, MD (Brigham and Women’s Hospital, Boston, MA), one of the panelists in the morning media briefing, said he’d long been skeptical of the first-generation bioresorbable scaffolds, suggesting a desire for 4- or 5-year data before approval. Bhatt said he believed at the time it had been a mistake to approve Absorb in the absence of long-term results but is now pleased with these ABSORB IV outcomes and wonders what might have happened had a more cautious approach been adopted before widespread approval.

“I must say, though, the results [of ABSORB IV] look pretty good,” said Bhatt. “If we started off with this and then improved, we might have been in a different place about initial concerns about stent thrombosis in practice and in clinical trials.”

Several next-generation scaffolds, such as Fantom from Reva Medical and Magnitude from Amaranth, look promising, according to Stone. The Fantom scaffold is visible under X-ray fluoroscopy and has a strut thickness that ranges from 95 to 115 microns. The struts of the Magnitude scaffold are even thinner—as low as 98 microns—and on par with Xience and other contemporary drug-eluting stents. “The scaffolds are getting better and hopefully that will eliminate some of these early differences,” Stone told TCTMD.

On the other hand, Renu Virmani, MD (CVPath Institute, Gaithersburg, MD), is not convinced that current poly-L-lactic acid (PLLA)-based bioresorbable scaffolds, such as Absorb, Fantom, Magnitude, and others, will emerge into mainstream use. “I don’t think PLLA stents necessarily have a future,” said Virmani. “I personally think because they don’t have the strength, fracture is a real problem. . . . I’m skeptical unless you can improve them enormously. Besides, we are showing the ultrathin [metallic drug-eluting] stents do much better.”

Similarly, Mayra Guerrero, MD (Mayo Clinic, Rochester, MN), questioned whether research dollars are best spent in trying to improve on metallic platform, drug-eluting stent technology that is already excellent. “The bar is so high because the stents are already so good,” she said. “Is there a need to push the envelope even more or invest the resources, effort, and money? Does it make sense? Or should we shift the resources into some other fields that require development.”

As part of their analysis, the ABSORB IV investigators presented data on recurrent angina. In ABSORB II, there was a suggestion recurrent angina was lower among patients treated with Absorb. In the present trial, though, there was no advantage of Absorb over Xience, with the angina curves virtually superimposable. Overall, more than 21% of patients had recurrent angina symptoms at 1 year. Cohen, who wasn’t involved in the trial, said it was important to put the angina question to rest “because it never really made much sense.”

“To me, one of the most interesting things about this angina analysis is that 21% are still having recurrent angina—one out of five patients—and this is a real quality of life factor,” said Stone. “We need to understand this better and figure it out if we’re going to keep improving quality of life for these patients.”

COMPARE ABSORB: A Randomized Trial of a Polymeric Everolimus-Eluting Bioresorbable Scaffold in High-Risk and Complex Lesions