EXCEL found PCI to be comparable to CABG in left main coronary disease, while the NOBLE trial suggested CABG might have the edge.

In contrast, in the NOBLE trial, published in the Lancet and led by Timo Mäkikallio, MD (Oulu University Hospital, Finland), treatment with PCI using predominantly a biolimus-eluting stent (Biomatrix Flex, Biosensors) was associated with a significantly higher rate of major adverse cardiac and cerebrovascular events at 5 years when compared with CABG surgery. Individually, all-cause mortality was comparable between the two treatments, while nonprocedural MI and the need for a repeat coronary revascularization were higher among those treated with PCI. Stroke rates were higher among the CABG patients at 30 days but numerically higher among PCI patients at 5 years.

Speaking during the late-breaking clinical trial session at TCT 2016, Stone said he believes that “in these selected groups of patients, PCI is an acceptable, perhaps even preferred alternative [to CABG],” because there was an “early” and “profound” advantage for PCI in terms of primary endpoint events, specifically a lower risk of MI. In addition, there was also a significant early benefit in terms of other major adverse events, such as TIMI major/minor bleeding, renal failure, infection, and major arrhythmia, among others.

To TCTMD, Evald Christiansen, MD (Aarhus University, Denmark), the senior investigator of NOBLE, also agreed that both treatment approaches are likely to continue to play a role in the treatment of left main coronary artery disease, particularly given the emphasis on patient-centered care.

“Surgery solves the problem long-term,” he said. “It means the risk of having a myocardial infarction is reduced and the need for a new intervention is reduced. That could matter for some patients. Also, for some patients, where the length of stay in hospital can be 9 days [with surgery], they might need to go back to work quickly and they figure they can always have a reintervention later.”

The bottom line, said Christiansen, is that mortality between PCI and CABG were the same in both trials, and since survival is equivalent, “we should be open to [the preferences of] the patient.”

Michael Mack, MD (Baylor Scott & White Health, Plano, TX), who wrote an editorial with David R. Holmes Jr, MD (Mayo Clinic, Rochester, MN), accompanying EXCEL, said the publication of two large trials, both studying the same issue and emerging with different results, will likely confuse some physicians, but added that the “devil is in the details.”

Regarding the optimal revascularization strategy for patients with left main disease, Mack, a cardiac surgeon, also told TCTMD there is no clear-cut right answer.

“Since the results, on their surface, are somewhat discordant with each other, it’s probably not going to be enough to change the guidelines,” he said. “I do think it allows more flexibility in terms of individual patient decision-making. In patients that tend to be younger and tend to be [low] risk for surgery, CABG gives them the best long-term sustainable result. However, if a patient is not a good candidate for surgery, does not have particularly complex disease, then it’s clear that those patients will do fine with PCI. I think it will expand the number of patients who can be safely and broadly treated with PCI, but I don’t think it’s an all-or-none answer.”

Mack added that with longer follow-up comparing the two strategies, CABG always looks better. “In the EXCEL trial, by the time you get out over 3 years, death is beginning to split in favor of surgery,” he said. “It’s not statistically significant, but if you have median follow-up of 5 years, my guess is that it’s going to become significant.”

EXCEL and NOBLE: The Studies

The researchers also analyzed data at 30 days, a secondary endpoint. The rate of death, stroke, or MI was significantly higher among the CABG-treated patients (4.9% vs 7.9%; HR 0.61; 95% CI 0.42-0.88), and this difference was driven by a significantly increased risk of MI (3.9% vs 6.2%; HR 0.63; 95% CI 0.42-0.95). In particular, there was a significantly increased risk of “large” periprocedural MIs with CABG, which was defined as CK-MB more than 10 times the upper limit of normal (or 5 times the upper limit of normal plus other evidence of myocardial infarction).

In the NOBLE trial, 1,201 patients with left main coronary artery disease were randomized to PCI or CABG. The 5-year estimate of major adverse cardiac and cerebrovascular events—a composite of all-cause mortality, nonprocedural MI, any repeat coronary revascularization, and stroke—occurred in 29% of patients treated with PCI and 19% of patients who underwent CABG, a difference that exceeded the limit for noninferiority (P = 0.007 for superiority). 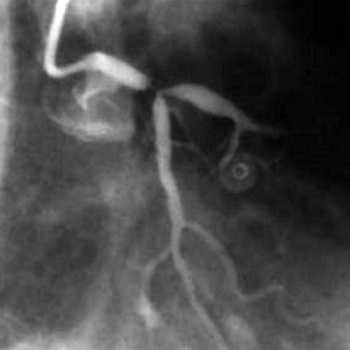 At 5 years, there was no difference in all-cause mortality between the two treatment groups, but the rate of nonprocedural MI was significantly higher among PCI-treated patients (6.9% vs 1.9%; HR 2.88; 95% CI 1.40-5.90). Similarly, repeat revascularizations were significantly higher with PCI compared with surgery (16.2% vs 10.4%; HR 1.50; 95% CI 1.04-2.17). Surprisingly, stroke rates were higher in the PCI arm, although the difference at 5 years was not statistically significant.

Christiansen told TCTMD that when the trial was initiated in 2008, the Society for Cardiovascular Angiography and Interventions had not yet developed a definition for clinically relevant postprocedural biomarker thresholds for defining PCI- and CABG-related MI. “That’s the reason,” he said, referring to their decision to include only nonprocedural MIs. “We didn’t want to have these small leaks in myocardial ischemic markers to count as an endpoint, because they’re not important.”

Stone, on the other hand, argued that there is a “big difference” in procedural adverse events between CABG and PCI in EXCEL and that the significantly higher rate of periprocedural MIs at 30 days observed with CABG—5.9% vs 3.6% for PCI—are “prognostically important.” He also noted that rates of STEMI at 30 days were significantly higher in patients treated with CABG.

“Myocardial infarctions were the endpoint that made the difference at 30 days,” said Stone. He added there was a higher rate of stent thrombosis observed in NOBLE with the biolimus-eluting stent compared with the Xience stent in EXCEL.

Interestingly, in NOBLE, researchers stratified patients by SYNTAX score and found that patients treated with PCI had inferior clinical outcomes compared with CABG-treated patients regardless of coronary lesion complexity.

Digging Into the Primary Endpoint

Daniel Simon, MD (University Hospitals Cleveland Medical Center, OH), who was not involved in either study, noted that the primary endpoint of NOBLE was changed from the original design. Initially, the study was intended to assess the primary endpoint after a full 2 years of follow-up, but with a low event rate, that was altered to a follow-up period of 5 years. When the forecasted event rate could not be reached, the trial endpoint assessment was again changed to a median of 3 years.

“We didn’t want to have these small leaks in myocardial ischemic markers to count as an endpoint, because they’re not important.” Evald H. Christiansen

“What you learn from the [EXCEL] trial is probably what you learned from SYNTAX, and that is in patients with a low or intermediate SYNTAX score, PCI is noninferior and has clearly has advantages in the first 30 days,” said Simon. With a functioning heart team, if a patient with left main disease is a candidate for PCI and a candidate for cardiac surgery, he would tell the patient PCI is a very reasonable approach.

“It improves short-term outcomes, and there is some catch-up of events out to 3 years but for my patients, the take-home is pretty obvious—if there is no difference in mortality at 3 years, then this is really going to be a ‘preference’ conversation,” said Simon.

Not surprisingly, not everybody sees the results the same way. Marc Ruel, MD (University of Ottawa, Canada), one of the panelists during the late-breaking session, said that if clinical events occurring within the first 30 days were excluded from EXCEL, landmark analyses show that PCI is “clearly inferior” to CABG with the regard to the primary endpoint. If the patient comes out of surgery without complications, CABG is the clear winner in EXCEL, he noted.

“So much of the cumulative effect at 3 years comes from the 30-day definition for MI,” said Ruel. “We have to be very careful. If you were to take periprocedural MIs from EXCEL, I think you’d see the exact same type of evolution for both patient groups that NOBLE showed.”

Additionally, Sanjay Kaul, MD (Cedars Sinai Medical Center, Los Angeles, CA), did not find the results of EXCEL particularly compelling and, like Ruel, noted that outcomes continued to worsen for PCI with longer-term follow-up. David Cohen, MD (St. Luke’s Mid America Heart Institute, Kansas City, MO), told TCTMD a 3-year clinical endpoint for a PCI-vs-CABG study “still seems a little early.” In contrast, whatever differences that might exist between the two procedures will have stabilized by 5 years. Kaul pointed out that the Kaplan-Meier event curves for all-cause mortality separated as early as 18 months in EXCEL, making longer follow-up critical.

Cardiac surgeon Subodh Verma, MD (St. Michael’s Hospital/University of Toronto, Canada), commended both investigators on successfully conducting two important clinical trials, but also raised the issue of durability. “Respectfully, short-term noninferiority does not imply long-term equivalence. . . . Towards the end of the 3-year period the curves were separating in favor of CABG,” said Verma.  “Furthermore, we have to be careful about overinterpreting short-term perioperative MIs in the CABG versus PCI group.”

For Verma, the results emphasize the need for collaboration between surgeons and interventionalists. “I do not see this as competition, but as a big step forward towards heart team-based individualization of revascularization choices,” he said.

Despite the many questions, and the ongoing debate about the findings, Mack told TCTMD that EXCEL and NOBLE, given the high costs and long duration of the studies, are likely to be the last clinical trials randomizing patients with left main disease to PCI or CABG. As a result, the evidence is as good as it is likely to get, he said. “What comes out of these trials is what we’re going to have to live with for the foreseeable future.”

Asked about reconciling the disparate results, Mack joked that the surgeons will focus on NOBLE, while cardiologists will point to EXCEL. “Everybody will look to the studies to support their preconceived notions, but I think these studies will start to change some minds and will cause some gradual change in practice,” he predicted. “[That said] I don’t think it’s going to be a substantive change.”

For Eugene Braunwald, MD (Brigham and Women’s Hospital, Boston, MA), who wrote an editorial accompanying EXCEL, the take-home message “is that the majority of patients with unprotected left main coronary artery disease, which was a very serious, life-shortening, and disabling condition early in my professional lifetime, can now be managed equally by means of two strategies of revascularization if carried out by expert, experienced teams such as those participating in the EXCEL trial.”