Faster and Larger Gains in Physical Function With TAVR Than With Surgery: SURTAVI

Aortic stenosis patients take a hit with surgery and may not recover function to the same extent as TAVR patients, an expert says. 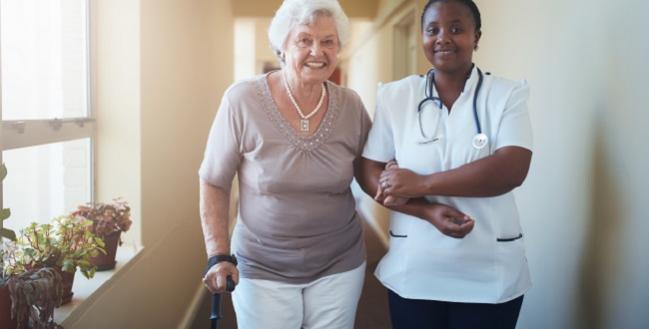 CHICAGO, IL—Patients who undergo TAVR for severe aortic stenosis have significantly better physical function at 2 years when compared with patients who are treated surgically, a new analysis of the SURTAVI trial shows.

At 2 years, more than 45% of TAVR patients in the study had a clinically meaningful improvement in 6-minute walk test from baseline compared with just 40% of surgery patients, a difference that was statistically significant. They also showed that TAVR patients had better functional status at 30 days, an unsurprising finding given that the surgical patients are still recovering from the sternotomy.

To TCTMD, lead investigator Mark Tuttle, MD (Beth Israel Deaconess Medical Center, Boston, MA), said the results suggest that the upfront trauma with surgery has lingering effects that persist beyond the recovery period. “They take a hit, and they don’t completely recover,” he said.

In SURTAVI, TAVR with CoreValve or Evolut R (Medtronic) was shown to be noninferior to surgery for the primary endpoint of death or disabling stroke at 2 years in intermediate-risk patients. Presenting the new data at TVT 2019, Tuttle said there is understandably a lot of emphasis with TAVR on hard clinical endpoints, such as mortality and stroke, to get these devices approved. But less is known about whether the early differences in patient function are maintained or disappear over time.

They take a hit, and they don’t completely recover. Mark Tuttle

This latest analysis included 863 patients who underwent TAVR and 794 patients treated with surgical aortic valve replacement (SAVR). Investigators defined a clinically meaningful improvement in functional status as either a 40-meter increase in walking distance during the 6-minute walk test or a 10% relative improvement in walking distance. Regarding quality of life, an improvement was defined as a 10 point or greater increase in the Kansas City Cardiomyopathy Questionnaire (KCCQ) score from baseline.

Both the TAVR and SAVR patient groups had similar baseline scores on the 6-minute walk test, with the majority of patients capable of walking between 150 and 400 m.

Patients in both treatment groups with the most limited mobility at baseline experienced the biggest gains in function following intervention. For example, 84.7% of patients with a 6-minute walk distance of less than 150 m at baseline treated with TAVR had a clinically meaningful improvement at 2 years as did 80.7% of patients treated with surgery. For those with a baseline 6-minute walk distance of 150-400 m, 42.3% and 38.2% of TAVR and SAVR patients had meaningful gains in function, respectively.

For the patients who gained the most from valve replacement—that being those only capable of walking 150 m or less at baseline—it’s likely that aortic stenosis had a larger impact on function than in other patients who could walk further, said Tuttle.

Tuttle agreed, noting that while these weren’t particularly frail patients, the trauma of surgery is often underappreciated.

“Even though these are intermediate-risk patients, they are older, in their 70s and 80s,” said Tuttle. “Having a surgery likely means an extended hospitalization and probably an ICU stay. We know that those elderly patients who are hospitalized in ICUs get deconditioned. They lose muscle mass. I think what we’re seeing here is that they probably take a hit they don’t recover from.”

Taking the surgeon’s perspective, Tsuyoshi Kaneko, MD (Brigham and Women’s Hospital, Boston, MD), argued there are other studies, including data from the PARTNER trials, showing the differences in functional status are not significant between TAVR and SAVR in the long term. Nonetheless, he praised the latest study, calling that data “quite convincing.” He asked whether researchers could identify any variables, such as a prolonged hospital stay, prolonged intubation, or surgical complications, that might explain the absence of a comparable improvement in function.

Tuttle said such an analysis is warranted and noted that all surgeons in SURTAVI were experienced operators. To TCTMD, Tuttle speculated that device design could also factor into the long-term gains in functional status compared with surgery.

“We know that CoreValve and Evolut R, which are supra-annular devices where the bioprosthesis sits above the annulus, have superior hemodynamics,” he explained, “meaning the residual mean gradient after the procedure is much better than [with] surgical valves because you can generally fit a larger valve into the same area. Whether the superior hemodynamics play a role in functional status long-term is unknown, but it’s something that could play a role.”

Nonagenarians Fare Well After TAVR, Once They Get Beyond 30 Days