The Optimizer Smart device, which delivers cardiac contractility modulation therapy, received support for patients who are not eligible for CRT. 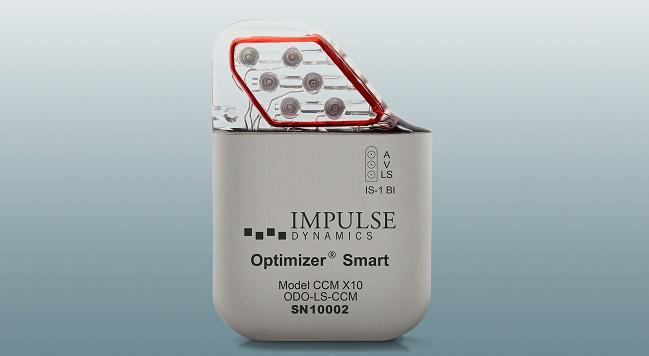 An advisory panel of the US Food and Drug Administration yesterday voted 12-0, with one abstention, that the benefits of cardiac contractility modulation (CCM) therapy with an implantable pulse-generating device outweigh the risks in certain heart failure patients who remain symptomatic despite optimal medical therapy.

The Circulatory System Devices Panel also voted 12-1 and 11-2 on questions of safety and efficacy, respectively. Panel members convened to review the premarket application for the Optimizer Smart implantable pulse generator (Impulse Dynamics), the latest iteration of devices in the Optimizer system designed to deliver electrical pulses to the right ventricular septum of the heart during the myocardial absolute refractory period. The device is intended for NYHA class III or ambulatory NYHA class IV heart failure patients who are in normal sinus rhythm with LVEF ranging between 25% and 45% and are not eligible for cardiac resynchronization therapy.

Optimizer Smart received CE Mark approval in October 2016, and earlier versions of the device have been implanted in more than 3,000 patients worldwide over the past decade. The FDA has designated it a “breakthrough device,” meaning that it was eligible for expedited review.

The primary evidence reviewed by the panel came from the FIX-HF-5C trial, designed to confirm subgroup findings of the earlier FIX-HF-5 trial, which did not meet its primary endpoint for ventilatory anaerobic threshold but did show a benefit for CCM over optimal medical therapy with regard to peak oxygen consumption (pVO2) and quality-of-life measures at 6 months. The newer study showed improvements in exercise tolerance as measured by pVO2 (primary endpoint), quality of life on the Minnesota Living With Heart Failure Questionnaire score and 6-minute hall walk test, and NYHA functional status at 24 weeks with CCM compared with optimal medical therapy. CCM was also shown reduce the primary safety composite endpoint of cardiovascular death and heart failure hospitalization.

In the FDA’s executive summary, the agency notes that FIX-HF-5C’s Bayesian primary effectiveness endpoint combines 30% borrowed data from FIX-HF-5, and though a benefit is suggested for the Optimizer system, “the absolute magnitude of improvement is unclear.

The agency also raised questions over whether there may be a difference in the benefit-risk ratio for patients with EFs above and below 35% and on appropriate endpoints, sample size, and duration of the postapproval study.

If approved, the advisory panel urged the FDA to consider a postapproval study in the range of 3 to 5 years.

HRS: Here’s How to Talk About Cybersecurity Concerns and Implantable Devices