Combined data from FAME 2, Compare-Acute, and DANAMI3-PRIMULTI pointed to a hard outcome difference, although ‘stability’ is an open question. 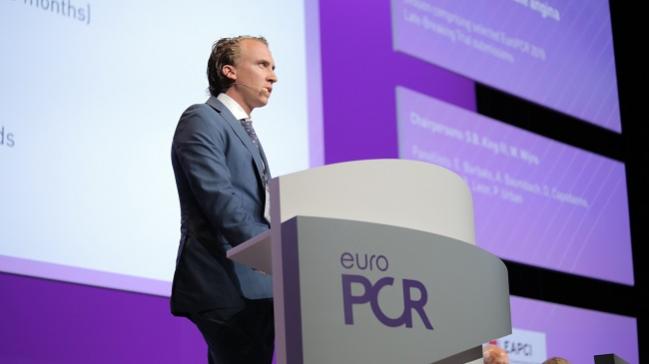 PARIS, France—Coronary revascularization guided by fractional flow reserve (FFR) significantly reduces the risk of death and MI when compared with optimal medical therapy in patients with stable coronary artery lesions, according to the results of a new, pooled analysis of three previously released clinical trials.

Presenting a patient-level, combined analysis of FAME 2, Compare-Acute, and DANAMI3-PRIMULTI during a late-breaking clinical trials session here at EuroPCR 2018, investigators reported that FFR-guided PCI reduced the absolute risk of cardiac death or MI by 4.5% compared with medical therapy (HR 0.72; 95% CI 0.54-0.96). Mortality alone, either all-cause or cardiac, was not reduced with PCI, but there was a 29% relative reduction in the risk of MI among those undergoing FFR-guided PCI.

The randomized trials conducted to date, particularly FAME 2, were not powered to show a difference in hard clinical events, but did show that FFR-guided PCI significantly reduced the need for urgent revascularization, he said. Bernard De Bruyne, MD (Cardiovascular Research Center Aalst, Belgium), who led the FAME 2 study, told TCTMD the pooled analysis validates the use of FFR-guided PCI, particularly given the significant reduction in the risk of MI.

“When you look at the event curves, there is a separation occurring at 1, 2, 3 years, with the benefit for FFR-guided PCI,” De Bruyne told TCTMD. For these physiologically significant lesions—those with an FFR of 0.80 or less—the data suggest there is an increased risk of an adverse event. “These are not small infarcts, not periprocedural MIs,” he said. “At some point, the lesion goes boom.”

Even Larger Reduction Without Crossovers

The combined analysis included 2,400 patients with stable coronary artery disease, of whom 1,056 underwent FFR-guided PCI and 1,344 were treated with medical therapy. Importantly, DANAMI3-PRIMULTI and Compare-Acute were trials that included STEMI patients who underwent successful treatment of the culprit lesion, but who had additional hemodynamically stable coronary lesions. These stabilized ACS patients were randomized to PCI or medical therapy of the nonculprit lesion after successful treatment of the culprit artery.

At some point, the lesion goes boom. Bernard De Bruyne

Nico Pijls, MD (Catharina Hospital), one of the study’s senior investigators, said the benefit of FFR-guided PCI would likely be larger in the real world, noting that some patients randomized to optimal medical therapy underwent revascularization.

“You’d have to wonder what would have happened to these people if they stayed within their own cohort,” he told TCTMD. “Of course the death and MI rate would have been much higher. In fact, if you would like to do a study to know what’s happening naturally between the two groups, you’d forbid crossover, which only improves the results in the medical therapy arm. The fact the results still show a significant benefit are that much stronger.”

Although all three trials assessed FFR-guided PCI in stable coronary lesions, Compare-Acute and DANAMI3-PRIMULTI were conducted in patients who had an acute coronary event, and the current analysis focused only on the nonculprit lesions. For this reason, Pijls suggested the patients might not be entirely similar, with the ACS patients possibly having more systemic inflammation, for example. He noted, too, that there had been concerns about when to assess physiologic function of nonculprit lesions in the setting of an acute MI. Some research had suggested it might be best for the acute event to pass before assessing ischemia in the nonculprit vessel.

“The question was always: If you have an acute MI in one lesion, and you see two other concomitant lesions, should you wait 5 days before you analyze those lesions and then decide, using FFR or whatever means, to treat them?” he said. “However, we have shown that when you measure FFR in a nonculprit lesion during ACS, the result [of FFR] is the same after 5 days.”

To TCTMD, Zimmermann pointed out that the relative benefit of FFR-guided PCI over medical therapy was evident among those with stable coronary artery disease and in those with ACS who underwent FFR-guided PCI of a nonculprit lesion. “It might be that the absolute risk is a little bit higher in patients with nonculprit lesions,” he said. “For patients, the most clinically relevant question is whether the relevant benefit of FFR-guided PCI is the same and we see that’s completely true.”
For Pijls, these data confirm that “FFR, in general, improves PCI.” He noted, however, that there are patients in whom FFR is unnecessary, such as in those with typical angina symptoms, a tight single stenosis, and a positive stress test. “In that setting, one plus one plus one equals three,” he said. “Unfortunately, these patients, which were quite common many years ago when I started my career, are very rare now. Now we see multiple lesions, and the question isn’t if you have to stent, but where do you have to stent and how many do you need to place.”

Nonculprit PCI following an ACS or a STEMI is a very different beast than truly stable angina. Rasha Al-Lamee

Comparing the latest findings with ORBITA, a sham-controlled study where PCI failed to improve patient symptoms, De Bruyne noted the study populations were much different, even though FAME 2 included individuals with stable disease. In FAME 2, patients were more likely to have multivessel disease, with nearly 25% having functionally significant lesions in two vessels, for example.

Also speaking with TCTMD, ORBITA principal investigator Rasha Al-Lamee, MBBS (Imperial College London, England), commented: “Nonculprit PCI following an ACS or a STEMI is a very different beast than truly stable angina. . . . Even if it's a few weeks after an ACS, I wouldn't consider the other lesions to be stable and of course, those patients will have higher event rates and so you might expect to see more benefit of stenting.”

Trajectory Unknown: How ORBITA Lands in Clinical Practice Still Up for Debate