FFR Insights Before and After PCI: Fresh Food for Thought

“We need to pay more attention to the precise physiology that we’re measuring and what it means,” K. Lance Gould says. 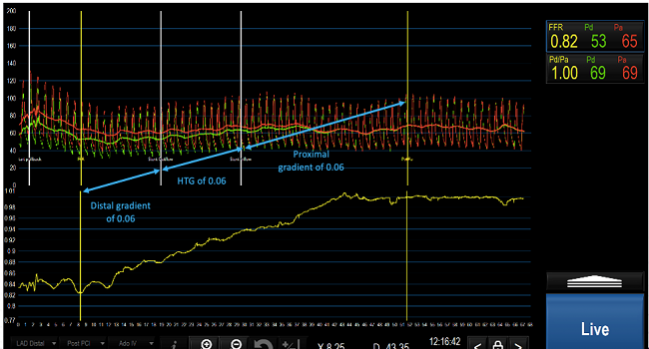 In a field that has grown accustomed to the idea of physiological assessment—particularly fractional flow reserve (FFR) to guide decisions to perform or defer revascularization—new data released today take a deeper dive into what these measurements actually mean.

The studies—TARGET FFR and DEFINE-FLOW—arrived one after the other today in a late-breaking session at TCT Connect 2020.

TARGET FFR found that physiologically-guided PCI did not lead to a greater proportion of patients having an optimal FFR ≥ 0.90 in treated vessels; that said, the strategy did reduce the proportion of patients with residual FFR ≤ 0.80. DEFINE-FLOW, meanwhile, brought coronary flow reserve (CFR) into the picture as a potential add-on to FFR before PCI; though complicated, the study essentially found that even high flow on CFR didn’t negate the importance of low FFR in determining which cases could safely be deferred.

“We need to pay more attention to the precise physiology that we’re measuring and what it means,” DEFINE-FLOW investigator K. Lance Gould, MD (UT Health Science Center, Houston, TX), urged when speaking to the press yesterday.

He pointed out that registry data have shown high variability in final FFR, with anywhere from 21% to 100% of patients achieving values of ≥ 0.90, which has been associated with lower risks of repeat PCI and MACE. “Perhaps more concerning,” said Collison, anywhere from less than 1% to 36% of patients have post-PCI FFRs of 0.80 or below, he noted.

Collison and colleagues enrolled 260 patients at their center between March 2018 and 2019, randomizing them after angiographically successful PCI to receive FFR-guided optimization or blinded FFR assessment.

In the guided group, FFR pullback of stented vessels suggested targets for further optimization in 60 of the 131 patients (46%), with operators deciding to perform additional postdilation and/or stenting in 40 of these individuals (66%). These steps increased mean post-PCI FFR from 0.76 to 0.82, with a larger increase seen with stenting than postdilation, while CFR rose from 3.0 to 4.0 (P = 0.02).

“Not unexpectedly, in an as-treated analysis, additional PCI optimization measures were associated with increased procedure duration [plus] higher doses of radiation, contrast, and adenosine,” Collison noted, adding that there was “no signal of excess harm” related to complications.

Session moderator Gregg W. Stone, MD (Icahn School of Medicine at Mount Sinai, New York, NY), followed up by asking why operators chose not to pursue further optimization for one-third of the patients whose FFR suggested room for improvement. In most instances, Collison replied, it came down to worries about the safety of high-pressure balloons after stenting, and in some cases imaging guidance may have suggested additional steps were unnecessary.

Allen Jeremias, MD (St. Francis Hospital, Roslyn, NY), lead author of the DEFINE-PCI trial, said he was “a little bit shocked” to see that so few patients had optimal FFR after angiographic guidance alone. “It really reinforces the importance of doing physiology before and after to guide PCI,” he commented.

Over the past few years, there’s been growing interest in better understanding microvascular abnormalities, Stone pointed out. “So it’s a real pleasure now to look at one of the first real scientific studies to examine how important these issues are,” he said, introducing DEFINE-FLOW.

The trial’s hypothesis was that, when treated medically, lesions with abnormal FFR ≤ 0.80 but intact CFR ≥ 2.0 would have noninferior outcomes “compared to lesions where the FFR and CFR were both intact,” Nils Johnson, MD (UT Health Science Center), said in his presentation today.

Enrolling from 12 sites in six countries, DEFINE-FLOW researchers studied 430 patients who among them had 533 stable lesions that underwent simultaneous FFR and CFR assessment. Only lesions with both FFR ≤ 0.80 and CFR < 2.0 underwent PCI. All other variations, including when FFR indicated poor flow but CFR did not, meant that patients received medical therapy and PCI was deferred.

Lesions in vessels that had abnormal FFR values of ≤ 0.80 and normal CFR values of ≥ 2.0 thus carried an absolute 5% higher 2-year risk of MACE than those showing normal values for both FFR and CFR. This difference in MACE risk did not reach significance for noninferiority (P = 0.065)—in other words, FFR mattered even in the face of normal CFR.

Johnson cautioned, though, there were limitations to consider—not only was the study observational, in particular, there was no comparison of treatment for lesions with positive FFR but negative CFR. This “really excludes our ability to make causal statements,” he said. Nor were operators and patients blinded to physiology results.

“DEFINE-FLOW is a hypothesis-generating study,” Johnson concluded, adding, “What this study has taught me, personally at least, is that we really need to distinguish between flow to the downstream myocardium and the intracoronary pressure that acts against the local plaque. I think it’s been natural to assume that the ability of the myocardium to increase its flow would really dominate symptoms and clinical events. What DEFINE-FLOW suggests is that local stress at the level of the stenosis contributes even more to the natural history of atherosclerosis.”

We really need to distinguish between flow to the downstream myocardium and the intracoronary pressure that acts against the local plaque. Nils Johnson

Gould said in the press conference that “this small study is quite important for several, perhaps unclear reasons.”

Its results undermine the idea that adequate CFR might overcome inadequate FFR, allowing for PCI deferral. Yet DEFINE-FLOW’s results are consistent with what has been seen in prior studies of quantitative perfusion on PET imaging, he explained. “The explanation mechanistically may be that the high stress flow, or CFR, through a mild-to-moderate stenosis or diffuse disease with no stenosis, causes a fall in coronary pressure. The fluid dynamic equations relating coronary flow pressure predict heterogeneous arterial wall stresses associated with plaque instability, subendocardial ischemia, or both.

“Consequently, the high-flow lesion with low FFR may indicate less-severe stenosis but still vulnerable plaque compared to low-flow lesions with low FFR, which may have still higher risk of plaque instability,” Gould continued.

Better understanding of which FFR/CFR thresholds are associated with mortality and morbidity could inform trial design, “potentially counterbalancing the ISCHEMIA and COURAGE trials that [relied on] precise quantitative severity of stenosis,” he said.

Roxana Mehran, MD (Icahn School of Medicine at Mount Sinai), moderating the press conference, said outright that she found the study “a little bit confusing.” Despite lack of noninferiority, in a statistical sense, Mehran drew attention to the cases with abnormal FFR ≤ 0.80 but intact CFR ≥ 2.0 as the main area for future research, asking: “Do we even have enough patients [in DEFINE-FLOW] to make very important conclusions yet, because of the permutations of the differential measurements?”

What’s been clearly shown from large randomized trials—such as DEFER and FAME 2—is that treating lesions with low FFR helps, Chad Rammohan, MD (Sutter Health, Mountainview, CA), commented. What’s being explored here is whether CFR may help guide which patients can safely defer PCI despite having low FFR. “The trial is a little bit confusing for me as an interventional cardiologist,” he said, as is the “double negative”—that is, “not noninferior”—in the conclusion.

The overall message is, for now, that FFR should guide decision-making, Rammohan and Mehran agreed, as did Gould. “This study says that you need to trust the FFR primarily at this level of [CFR],” Gould said. “I invented CFR. I’d love to see it work. But I’m a pretty cold-blooded scientist. This trial is very small [and] there are many limitations.” He said a larger RCT is needed, as well as a look at various CFR thresholds.

Mehran, for her part, called for additional studies of CFR, particularly in diffuse disease and in women. “There could also be some gender issues regarding the microvasculature that could have an important implication on the coronary flow reserve,” she observed.

When Pressure and Flow Disagree: The DEFINE-FLOW Trial.

For Real-world ACS Patients, FFR Use in PCI Tied to Lower In-Hospital Mortality