The reversal agent for the factor Xa inhibitors has recently been added to the US A-fib guidelines. 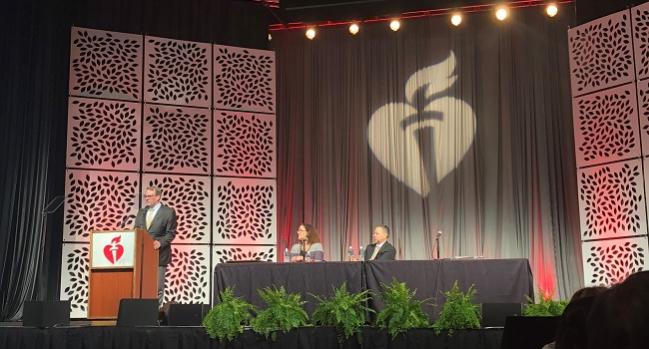 The findings, which were published simultaneously online in the New England Journal of Medicine, also showed 30-day mortality rates of 13.9% overall, 15.0% for patients with intracranial hemorrhages, and 11.1% for those with GI bleeds.

“Those are actually pretty impressive numbers in a population of anticoagulated major bleeding patients,” Milling said during his presentation.

These are not the first results to come out of the single-arm ANNEXA-4 study, which evaluated 352 patients at 63 centers in North America and Europe who received andexanet alfa, a recombinant modified human factor Xa that binds factor Xa inhibitors, allowing the body’s own factor Xa to resume normal clotting functions. An analysis published in August 2016 included the first 67 patients and another presented in March 2018 included 227. Both provided results similar to those seen in the full cohort presented by Milling.

Partially on the basis of data from ANNEXA-4, andexanet alfa was approved by the US Food and Drug Administration in May 2018 for the reversal of life-threatening or uncontrolled bleeding in patients taking the two most common factor Xa inhibitors, rivaroxaban (Xarelto; Bayer/Janssen) and apixaban (Eliquis; Bristol-Myers Squibb). It recently gained a recommendation in the US A-fib guidelines, along with the only other approved reversal agent for a non-vitamin K antagonist oral anticoagulant—idarucizumab (Praxbind), an antidote for dabigatran (Pradaxa; both Boehringer Ingelheim).

ANNEXA-4 included patients with acute major bleeding who had taken their last dose of a factor Xa inhibitor—rivaroxaban, apixaban, enoxaparin, or edoxaban (Savaysa; Daiichi Sankyo)—within the past 18 hours. Andexanet alfa was administered as a bolus followed by a 2-hour infusion. In the final safety cohort, mean patient age was 77, and 53% of participants were men. Most patients (80%) were taking anticoagulation for A-fib, with 17% receiving treatment for venous thromboembolic disease. Most of the qualifying bleeds (64%) were intracranial; another 26% were in the GI tract.

Of the patients with effective hemostasis at 12 hours after administration of andexanet alfa, 84% and 16% had hemostasis that was rated as excellent and good, respectively. The effect was consistent across subgroups defined by type of factor Xa inhibitor, sex, age, bleeding site, and andexanet alfa dose.

As seen in the interim analyses, the reversal agent rapidly suppressed anticoagulant activity and maintained a low level during the infusion, after which activity started to tick back up. Patients taking rivaroxaban and apixaban saw 92% reductions in anti-factor Xa activity by the end of the bolus; that figure was 75% for enoxaparin.

In the overall cohort, hemostatic efficacy was not related to the degree of reduction in anti-factor Xa activity. However, there was a modest association between the two in patients with intracranial hemorrhages.

In terms of safety, 9.7% of patients had at least one thrombotic event within 30 days, including 14 ischemic strokes, 13 deep vein thromboses, seven MIs, five pulmonary embolisms, and one TIA.

This is in the range expected for such a sick study population, Milling said, adding that there were no events among patients who restarted full oral anticoagulation. This “emphasizes the importance of putting these prothrombotic patients back on an anticoagulant if possible, and as soon as possible,” he said.

In the NEJM article, the investigators acknowledge that ANNEXA-4 is limited by the lack of a control group.

“At the time of study initiation, it was determined that a randomized, controlled trial would have logistic and ethical challenges, given the perceived risks of placebo assignment in this highly vulnerable population,” they explain. “However, continued use of unapproved agents, despite a lack of rigorous clinical data, has changed the equipoise for a trial. Thus, under the guidance of the FDA and as a condition of accelerated approval in the United States, the sponsor is conducting a randomized trial (ClinicalTrials.gov number, NCT03661528) that is expected to begin later this year.”