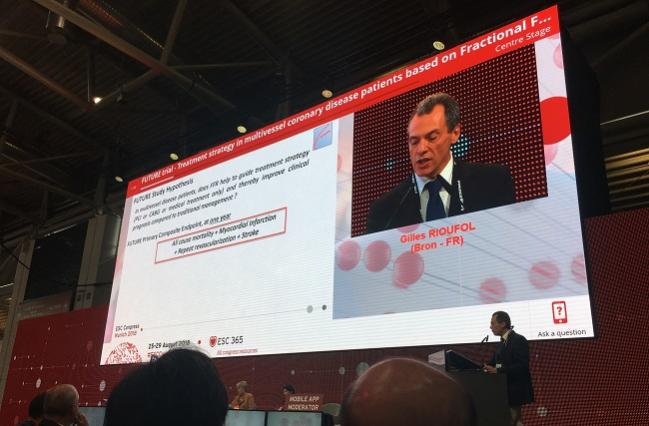 MUNICH, Germany—As seen in a prior analysis of the prematurely halted FUTURE trial, use of fractional flow reserve (FFR) to guide treatment choice in all-comers patients with multivessel disease was associated with a doubling in the risk of death within the first year, with no beneficial impact seen on other outcomes.

Though there was no difference between the FFR-guided and angiography-guided groups in terms of the primary composite outcome of all-cause mortality, MI, repeat revascularization, or stroke through 1 year (14.6% vs 14.4%; HR 0.97; 95% CI 0.69-1.36), the risk of death was significantly higher in the FFR-guided arm (3.7% vs 1.5%; P = 0.036), Gilles Rioufol, MD, PhD (Claude Bernard University Lyon, France), reported here at the European Society of Cardiology Congress 2018.

Rioufol noted that current guidelines recommend use of FFR for guiding procedures in patients with multivessel disease who are eligible for PCI, and indicated that these results should not change that.

“The FUTURE trial was questioning the place of FFR for [choosing a] treatment strategy at the time of angio and did not challenge current FFR use for PCI guiding,” he said during his presentation.

Experts were skeptical of the mortality findings, which had been seen in an earlier analysis. Speaking with TCTMD, Julinda Mehilli, MD (Munich University Clinic, Germany), who served as a panelist at the presentation, said she was surprised by the high rate of mortality in the FFR-guided arm, noting that in the FAME 2 trial, for example, mortality was under 2%.

“I think it’s an outlier,” she said about the trial. “I think it’s important to know the results, but in my opinion you don’t change the practice that you’ve had up until now.”

Patrick Serruys, MD, PhD (Erasmus Medical Center, Rotterdam, the Netherlands), one of the chairs of the session, pointed out after the presentation that owing to the low numbers of deaths—seven in the angiography-guided arm and 17 in the FFR-guided arm—a change of just one or two would render the difference nonsignificant. Thus, the finding could be due to chance, he said, adding the trial’s data and safety monitoring board (DSMB) should not have stopped the study early.

“It was a courageous trial, but I think it really raised more questions than provided answers,” Serruys said.

The FUTURE trial, conducted at 31 French centers, was designed to explore whether FFR can be used to help decide among different treatment strategies in an all-comers population of patients with multivessel coronary disease on angiography. In the FFR-guided group, FFR was performed on all target lesions, with those having a reading of 0.80 or lower eligible for PCI or CABG. In the angiography-guided group, noninvasive tests other than FFR could be used to help guide treatment choice.

There was a planned enrollment of 1,728 patients, but the DSMB recommended stopping the trial after just 938 patients were randomized due to the observed difference in mortality. Slightly less than half of the patients presented with ACS and roughly half of patients had three-vessel disease. The average SYNTAX score was 18 in the angiography-guided group and 19 in the FFR-guided group. Overall, 43% of lesions evaluated by FFR had a reading above 0.80.

Other than all-cause mortality, however, outcomes were not affected by use of FFR, with no significant differences in the primary composite endpoint, cardiovascular death, unplanned revascularization, or stroke.

An exploratory analysis of the deaths showed that patients in the FFR-guided group had more severe disease and were more likely to have three-vessel disease.

Rioufol highlighted three factors that could have played a role in the higher rate of mortality in the FFR-guided group: the lower-than-expected rate of CABG considering that all of these patients had multivessel disease, the higher rate of PCI in severe patients with a SYNTAX score over 32, and the high rate of ad hoc PCI (about 90% in both groups).

In his comments after the presentation, Serruys noted that guidelines would indicate that for a patient with three-vessel disease, guideline-directed care would call for taking the patient off the table to discuss options with a surgeon.

Rioufol wondered whether operators who use FFR and then see a low value are impelled to move ahead and perform PCI, agreeing with Serruys that in complex patients, even if the FFR value is low, the wire should be pulled back and options should be discussed with a surgeon.