Higher Mortality Risks in Smokers With Coronary and Aortic Calcification 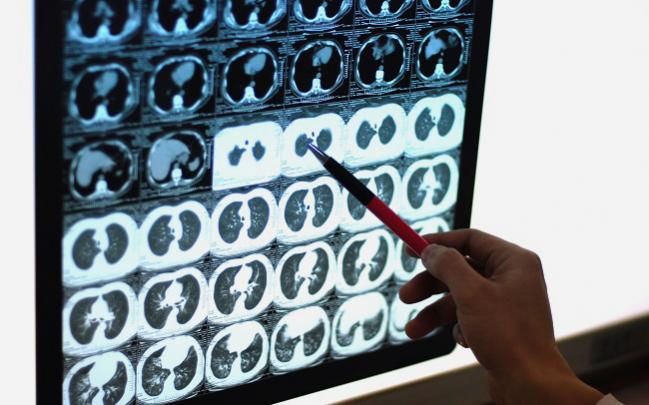 Arterial calcification is present in the vast majority of heavy smokers undergoing screening for lung cancer and is associated with an increased risk of all-cause and cardiovascular mortality, according to the results of a new analysis of the National Lung Screening Trial (NLST).

The study, led by Nikolas Lessmann, MSc (University Medical Center Utrecht, the Netherlands), and published January 16, 2019, in JACC: Cardiovascular Imaging, showed that among this population of heavy smokers, nearly every participant had evidence of thoracic artery calcium (TAC) but the prevalence of CAC was less common. Overall, 72% of participants had evidence of coronary artery calcium (CAC), including just 60% of women with CAC.

“Not everybody had it,” said Lessmann. “That, I think, is remarkable because you’d expect that these people would have some degree of calcification in the coronary arteries.”

Overall, coronary calcification was much more common and much more severe in male than in female smokers, although calcification of the thoracic artery occurred equally in men and women smokers. On average, women had a much lower arterial age than the men, with female smokers having as much CAC as male smokers who were nearly 10 years younger.

“It seems to be that calcification of the coronary artery happens later in women than in men, by about 10 years, which is consistent with other studies,” said Lessmann. “For the [thoracic] aorta, we didn’t see that at all. There we found a comparable extent and prevalence of calcification.”

In November, the American College of Cardiology/American Heart Association (ACC/AHA) updated their clinical guidelines for the management of cholesterol and opened the door to use of CAC screening as a means to guide statin therapy in patients at intermediate risk for atherosclerotic cardiovascular disease. That recommendation, though, does not apply to smokers because these individuals are already at higher risk.

Michael Miedema, MD (Minnesota Heart Institute Foundation, Minneapolis), who wrote an editorial accompanying the study, said that for middle-aged adults at intermediate risk (those with an estimated 10-year risk of atherosclerotic cardiovascular disease ranging from more than 7.5% to less than 20%) CAC screening is used frequently to personalize treatment. The clinical utility of CAC screening in smokers, however, is far less clear.

Given their smoking status and estimated risk, which likely exceeds 20%, the NLST patients would not be referred for CT solely for calcium scoring. However, if the CAC and TAC scoring can be obtained as a “free” secondary finding as part of lung cancer screening, it could provide clinical value.

“That population is a little bit different because it’s not an intermediate-risk group, it’s a high-risk group in general,” Miedema told TCTMD. “In a high-risk group, further testing is of less value. That being said, if you’re getting the CT scan done for lung cancer screening, just to ignore the findings that you see in terms of the calcification, I don’t think that’s right either. Those findings do have value and I think are worth discussing with the patient. Giving the patient a general idea of where things are at, to use it as motivation for further preventive efforts, is pretty reasonable.”

The new analysis is a retrospective, nested, case-control study of data collected from the NLST, a study comparing chest radiography against low-dose CT for screening for lung cancer in heavy smokers aged 55 to 74 years. On the basis of the study, released in 2011, the US Preventive Services Task Force now recommends annual screening with low-dose CT in patients who meet the eligibility of the trial. This latest analysis included all patients in the CT arm who died during the study and a control group of randomly chosen participants from the CT arm; in total, 5,718 participants were included.

“We didn’t really observe strong differences between men and women for the association with mortality,” said Lessmann.

Zero Calcium Does Not Mean Low Risk in Smokers

In his editorial, Miedema states that given the study participants’ higher baseline risk, “the clinical utility of CAC and TAC in this population can, and should be, questioned.” Although individuals who lack CAC despite a prolonged history of smoking are a unique population, studies have shown that even those with a CAC score of 0 still have twice the risk of all-cause mortality compared with nonsmokers, he writes.

To TCTMD, Miedema pointed out that individuals in the NLST had a significant smoking history—they were either active smokers for the past 15 years or had a history of at least 30 pack-years—undergoing CT screening for lung cancer. For that reason, the absence of coronary and thoracic plaque does not give these heavy smokers a free pass.

“I wouldn’t use that information to say: ‘You’re fine,’” he said. “This is still a patient with a pretty significant smoking history and that increases their risk regardless of the calcium score.”

Lessmann agreed, noting that even people without CAC and TAC remained at a significantly higher risk of death from cardiovascular disease when compared with the general population of nonsmokers. “They still die from coronary heart disease even though we don’t see calcified plaque in these patients,” he said. “There seems to be another pathway to coronary artery disease that doesn’t involve plaque, so we shouldn’t consider them low risk.”

Regarding the clinical implications of their findings, Lessmann said their aim was more exploratory in nature. At the present moment, it’s still unclear what to do with CAC and TAC information in a subset of older patients who smoke or who have smoked heavily. “Basically, anybody who is eligible for lung cancer screening is also already eligible for statin therapy, for example,” said Lessmann. “What more can we do if we already know these people are at very high risk?”

5 months ago
After my Coronary Artery Disease (CAD) diagnoses, I was immediately advised for a coronary angioplasty, then a stent. After a while my condition got worse again with severe shortness of breath and angina, so i started on a natural CORONARY ARTERY DISEASE (CAD) TREATMENT from Herbal Health Point, the herbal treatment was very effective treating my heart condition and the shortness of breath. I had a total decline in symptoms. Go to w w w. herbal healthpoint. c o m.  Its been 2 years since the treatment, I do lots of walking and lost some weight. My daughter also used their CHF product for her congestive heart failure, very effective.

‘Accelerated Atherosclerosis’ Not Uncommon in Arteries of Young People