The data on lower-limb amputation in two European registries support the higher rates first observed in the large CANVAS trial of canagliflozin. 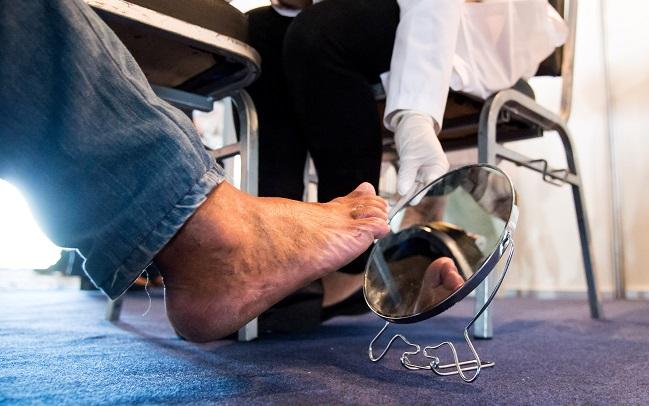 (UPDATED) The use of sodium-glucose co-transporter 2 (SGLT2) inhibitors for the treatment of type 2 diabetes is associated with more than a twofold increased risk of lower-limb amputations, as well as an increased risk of diabetic ketoacidosis, when compared with a glucagon-like peptide 1 (GLP1) receptor agonist, a new observational study suggests.

The results, published earlier this month in the BMJ by lead investigator Peter Ueda, MD, PhD (Karolinska University Hospital, Stockholm, Sweden), and colleagues, are in line with the increased risk of lower-limb amputation—mainly toe or metatarsal amputations—observed in CANVAS, the large-scale cardiovascular outcomes study with the SGLT2 inhibitor canagliflozin (Invokana; Janssen).

Unlike in CANVAS, Ueda and colleagues did not observe an increased risk of bone fracture with SGLT2 inhibition.

Case reports to the US Food and Drug Administration Adverse Reporting System have suggested SGLT2 inhibitors could be associated with a number of adverse events, including diabetic ketoacidosis, acute kidney injury, and serious urinary tract infection, say the researchers. The FDA is also investigating additional reports of acute pancreatitis associated with the drug class.

To TCTMD, Ueda said clinical trials are the most reliable source for estimating the causal effect of treatment and that observational studies, such as theirs, could be subject to confounding. “Our study adds to the data on the safety of these drugs by assessing the association between SGLT2 inhibitor use and serious adverse events in a substantially different population as compared to those included in the clinical trials, a population representative of routine clinical practice,” he said.

Our findings should lead to further emphasis on the importance of counseling patients on routine preventative foot care. Peter Ueda

To assess the risk of serious adverse events in routine clinical practice, the researchers used registry data from Swedish and Danish health and administrative databases. Between 2013 and 2016, they identified 21,008 new users of SGLT2 inhibitors and 27,278 new users of GLP1 receptor agonists. Overall, those prescribed an SGLT2 inhibitor—98% were prescribed either dapaglifozin (Farxiga; AstraZeneca) or empagliflozin (Jardiance; Boehringer Ingelheim/Eli Lilly)—were older and more likely to be obese, male, and to be using insulin or a dipeptidyl peptidase-4 (DPP-4) inhibitor at baseline.

There were 2.7 lower-limb amputations per 1,000 patient-years of treatment with the SGLT2 inhibitors compared with 1.1 amputations per 1,000 patient-years of treatment with GLP1 receptor agonists (HR 2.32; 95% CI 1.37-3.91). The risk of diabetic ketoacidosis was also significantly elevated among those treated with dapagliflozin, empagliflozin, or canagliflozin (HR 2.14; 95% CI 1.01-4.52).

Ueda stressed that the most important metric is the absolute increase in adverse-event risk with treatment. In various subgroups, the relative risk of treatment with SGLT2 inhibitors remained consistent, but the absolute risks varied.

“For example, the event rate for lower limb amputation was much higher among those with a history of peripheral artery disease or lower-limb amputation,” he said. “This meant that the absolute risk increase was higher in this subgroup of the population. This is a finding that is consistent with data reported in the CANVAS trial of canagliflozin.”

Overall, the absolute increased risk of diabetic ketoacidosis and lower-limb amputation was small and should be considered in the context of the cardiovascular and renal benefits of SGLT2 inhibitors, said Ueda. Increased physical activity and smoking cessation can help offset these risks, he advised, and should be emphasized in patients with diabetes starting treatment.

“As for lower-limb amputation, our findings should lead to further emphasis on the importance of counseling patients on routine preventative foot care,” he said. “Moreover, patients at high risk of amputation—for example, such as those with peripheral artery disease or foot ulcers—might be monitored more closely if SGLT2 inhibitors are used.”

Acute kidney injury, serious urinary tract infection, venous thromboembolism, and acute pancreatitis were similar between the two drug classes. The researchers say the study is limited by its observational nature and that the class-wide mechanisms responsible for amputation or diabetic ketoacidosis are unknown. Volume depletion and increased levels of phosphate and secondary hyperparathyroidism have been postulated as possible causes, however.