Cost differences in patients treated with Sapien XT and Sapien 3 valves vs surgery were driven by fewer hospital readmissions and days in care. 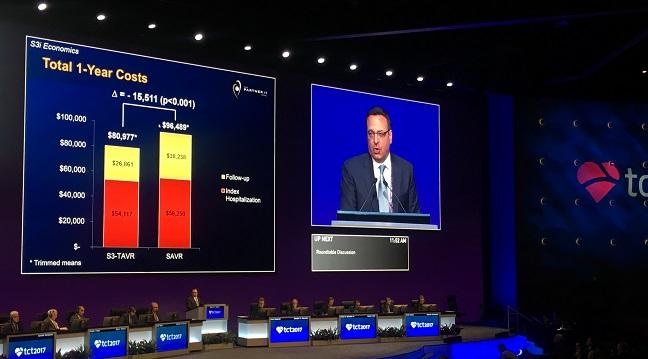 TAVR is an “economically dominant strategy” compared with surgery, said David Cohen, MD, MSc (Saint-Luke’s Mid America Heart Institute, Kansas City, MO), who presented the combined cost-effectiveness analysis of both the PARTNER 2A and SAPIEN 3 studies here today at TCT 2017. “These findings suggest that TAVR should be the preferred strategy for such patients, based on both clinical and economic considerations.”

The US Food and Drug Administration approved both the Sapien XT and Sapien 3 balloon-expandable TAVR valves (Edwards Lifesciences) for use in intermediate-risk patients last year based on results from PARTNER 2A and SAPIEN 3, but little has been known about the economics of using these devices compared with surgery.

Cohen and colleagues compared both the TAVR cohort from PARTNER 2A (n = 994) and the TAVR arm from SAPIEN 3 (n = 1,077) in separate analyses with the former trial’s surgical arm (n = 944). They linked trial data with Medicare claims information for both index hospitalization costs as well as costs related to follow-up hospitalizations, physician services, outpatient testing, and rehab/skilled nursing care.

However, 2 years of follow-up costs brought the total price of surgery to more than $6,000 above TAVR with Sapien XT ($114,132 vs $107,716; P = 0.01), with the most substantial cost differences seen in the first 6 months. Moreover, TAVR patients gained 0.15 quality-adjusted life-years (QALYs) over surgery patients through 2 years.

Follow-up cost savings for those treated with Sapien 3 versus surgery were driven by a significant decrease in rehospitalizations as well as a halving of days spent in rehab/skilled nursing facilities, Cohen said.

To these results, “my personal reaction is sort of, wow!” said press conference chair Ori Ben-Yehuda, MD (Cardiovascular Research Foundation, New York, NY). “It’s good news for patients, it's good news for the economy and for us taxpayers.”

My personal reaction is sort of, wow! Ori Ben-Yehuda

Surgeons, who some might think would be negatively affected by these results, are “fortunately . . .  involved in all of these procedures” given the Medicare mandate that all TAVR patients be reviewed with a heart team approach, Cohen noted. There might still be surgeons who are skeptical, he added, “but I don’t see a lot of surgeons who are putting up a fight.”

These results also shouldn’t affect practice too much given that “the market is already moving this way,” Cohen said. “Practice is driven right now by the clinical data, which are already good, and by the patient demand, which is high.”

Also in the press conference, panelist Duane Pinto, MD, MPH (Beth Israel Deaconess Medical Center, Boston, MA), called the results “remarkable.” It is “very rare to see such an economically dominant strategy at such an important area,” he said, adding that the methodology of the study is “noteworthy” in that the researchers set out to identify signals not often sought out.

Cohen acknowledged Pinto’s point, but observed that the era of bundled payments will enable hospitals to gain cost savings definitely within the first 90 days due to avoidance of rehospitalizations and rehab and skilled nursing facility stays seen more with surgery. “Even to the hospitals if they are in a bundled payment or an HMO type environment, they'll do well,” he said.

Going forward, Cohen speculated that TAVR will see continued growth even with a consistent number of centers performing the procedure. “As the strength of the data come out, there will continue to be increased pressure on physicians and this type of care,” he said.

For low-risk patients where clinical and economic data are still outstanding, Cohen said he could only guess what will happen. “Obviously the most important piece of data on the low-risk population won't be known for many years, which is the durability,” he said. “It’s hard to imagine that we will not have good outcomes in both TAVR and surgery for those patients in the short term.”

After PARTNER 2A/S3i and SURTAVI, What Is the Role of Surgery in Intermediate-Risk AS Patients?