SAN FRANCISCO, CA—Intravascular lithotripsy used to fracture calcium in highly calcified arteries prior to PCI is safe, a small study confirms. The data also offer insights into the mechanism of action for this novel approach.

Simultaneously published in Circulation: Cardiovascular Interventions, results follow the 60-patient DISRUPT CAD I study, which established the feasibility of lithotripsy in this setting. The Shockwave IVL system (Shockwave Medical; Fremont, CA) is made up of a semicompliant balloon catheter, connector cable, and generator; together, these deliver pulsatile mechanical energy that causes microfractures in the calcium. The therapy has shown promise in other initial studies but has yet to be compared head-to-head with other plaque modification methods like rotational and orbital atherectomy.

Low MACE With No Procedural Complications

For DISRUPT CAD II, Di Mario along with lead author Ziad Ali, MD, DPhil (NewYork-Presbyterian/Columbia University Irving Medical Center, New York, NY), and colleagues enrolled 120 patients with coronary artery calcium slated to undergo PCI at 15 hospitals in nine countries between May 2018 and March 2019. About one-third of patients were diabetic, and 8% were in renal failure. Overall, 94.2% of lesions were considered to have severe calcification on angiography, with an average 26 mm of calcified length and about 70% graded as concentric.

All patients received successful delivery and use of the lithotripsy catheter, and the postprocedure angiographic acute luminal gain was 0.83 mm. Residual stenosis was 32.7% and further decreased to 7.8% after DES implantation.

In-hospital MACE, the primary endpoint defined as cardiac death, MI, or TVR, occurred in 5.8% of patients, consisting of seven non–Q-wave MIs. There were no instances of procedural abrupt closure, slow or no reflow, or perforations. MACE at 30 days was 7.6%, including one cardiac death, one Q-wave MI, one TVR, and two definite/probable stent thromboses.

In a substudy of 47 patients with post-PCI OCT, calcium fracture was identified in 78.7% of lesions. The mean number of fractures was 3.4, and the fractures measured a mean of 5.5 mm in length.

In a panel discussion following the presentation, Robert Gil, PhD (Central Hospital of the Ministry of the Interior, Warsaw, Poland), commented that “we all know that high-speed rotablation is not enough for [certain] lesions, especially in deep locations,” suggesting a potential need for this kind of lesion preparation. “The only bad point of this technology is the price, which is very high,” he said.

“I agree it’s a costly device—you should reserve it for the patients who truly deserve it,” Di Mario responded. How to assess this might be seen by some as tricky, but he asserted that it can be accomplished with “very simple angiographic criteria,” as was done in DISRUPT CAD II. “We should probably understand better whether these criteria developed mainly for rotational atherectomy do apply also to lithotripsy,” he acknowledged. “I still think that what we have seen is that the more calcium is present, the better in terms of having more consistent fracture and multiple fractures and greater lumen gain. In a way, we have to make sure to apply it to the truly calcified lesions—better if concentric. That will achieve the best possible result.” 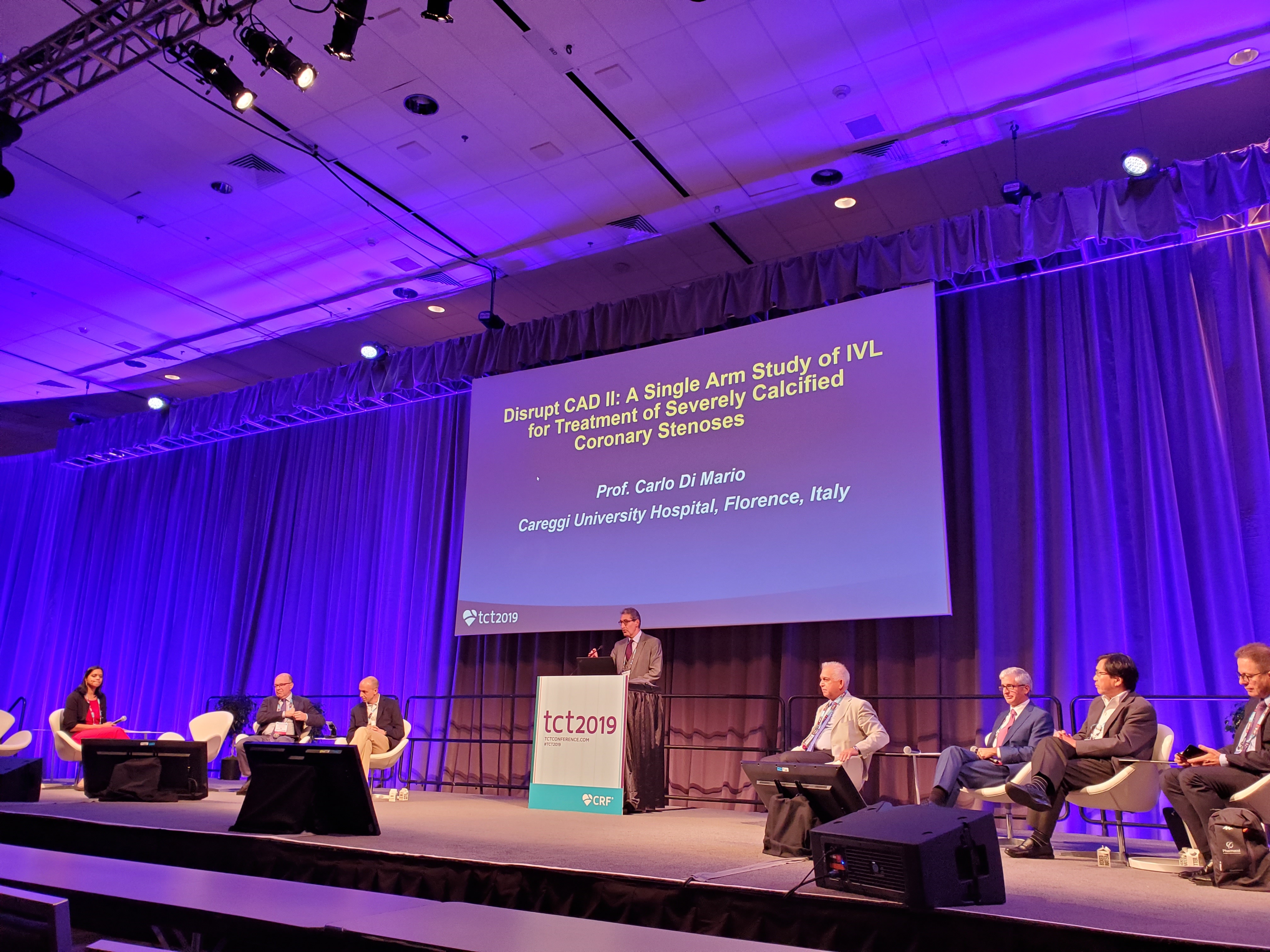 Session co-moderator Dimitrios Alexopoulos, MD (Attikon University Hospital, Athens, Greece), expressed surprise at the safety shown in the study, especially given the limited experience available with this technology. “No complications, is this really true?” he asked. “It's difficult to accept that disruption of calcium will occur in every case in a predicted way and there will be no case of perforation or something like that. There are isolated cases published that there were some problems. Do you suggest it’s a matter of taking special precaution or is it a technique that is demanding?”

Di Mario, who was also a PI on DISRUPT CAD I, assured that all patients were monitored and “we did not have [an] event that was not reported.” Experience has grown with the procedure, he continued, noting that “the main challenge is to deliver a balloon that, especially in the initial series, was fairly thick and relatively inflexible.”

The good safety seen in the study is related to several factors, Di Mario suggested. First, there is zero embolization. Secondly, “you can protect all the side branches you want because the wire can remain in place.” Lastly, he observed, “the mechanism is not like when you have calcified region to go to 40-50 atm and create an enormous dissection that clogs all branches and forces you to use longer stents than the calcified lesion itself, but you can stick simply to the diseased segment.” 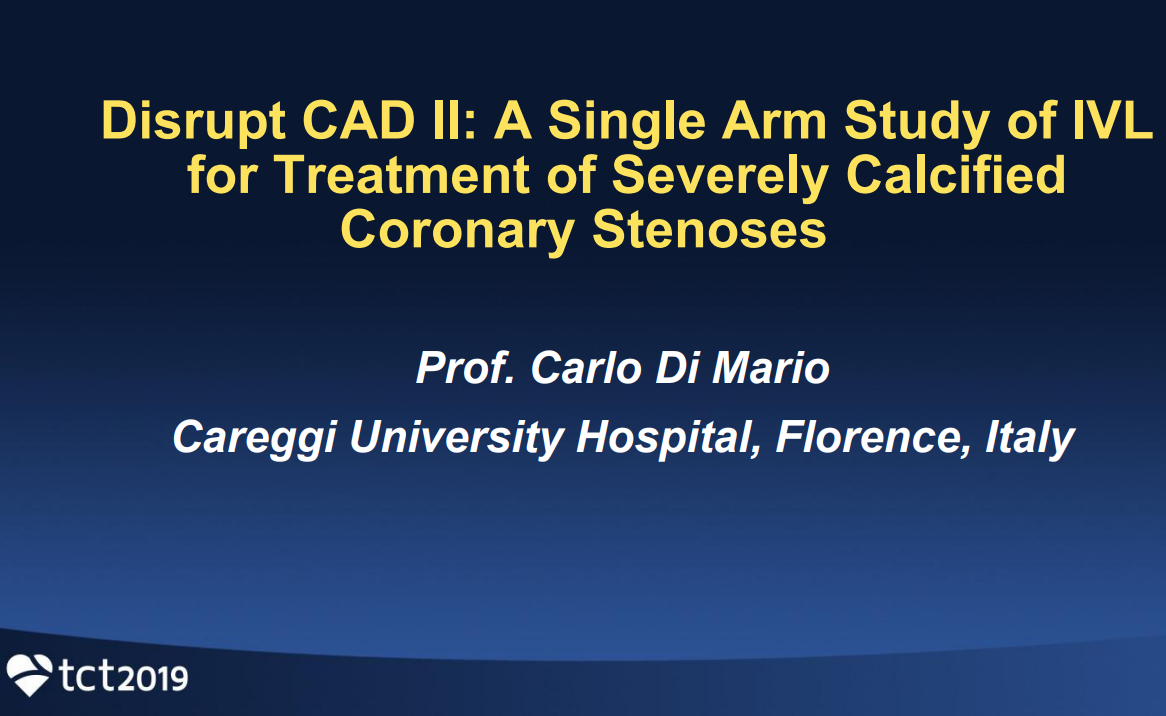 But longer-term follow-up of this cohort is crucially needed, according to panelist Azfar Zaman, MD (Freeman Hospital, Newcastle upon Tyne, England). “The procedural outcomes are very good, but do we not have a duty to follow all these patients . . . to see what the long-term outcomes are?” he asked, noting that “[OCT images show] fracture of the calcium, but some of them show fracture beyond and possibly into the tunica media.”

“I agree it will be nice to have a series of patients with an angiographic follow-up to make sure that they have no aneurysm,” Di Mario said, adding that he’s never seen any in his 3.5 years of experience.