Midrange data provide some reassurances on impact of leaflet thrombosis, but some experts aren’t quite ready to call it a benign condition. 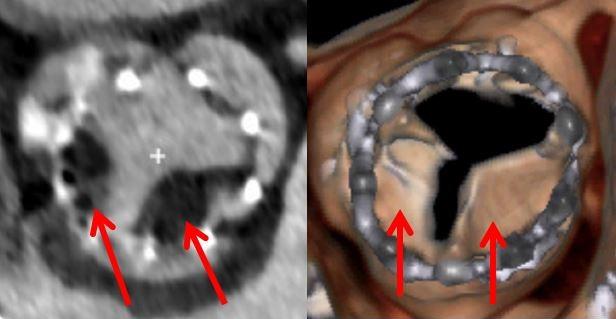 New data provide some reassurance about the consequences of leaflet thrombosis following transcatheter aortic valve replacement, with investigators reporting the condition was not linked with an increased risk of clinical events beyond 1 year.

These new data, he added, suggest that leaflet thrombosis is a relatively “benign finding,” although there remains some concern about the durability of the prostheses. “You can imagine that if you have some kind of damage to the pericardial tissue there could be some deterioration over 1 or 2 years,” said Ruile. “There is a little concern but it’s too early to draw any conclusions. We need to take a closer look at it.”

Guilherme Attizzani, MD (UH Cleveland Medical Center, OH), who was not involved in the study, agreed the data are reassuring given the worry leaflet thrombosis will lead to neurological complications such as stroke and TIA. However, at present, Attizzani is reluctant to suggest leaflet thrombosis is not without concern, particularly if it leads to impaired aortic mean pressure gradients and treating patients with oral anticoagulation.

“I think it’s too soon to call it a benign condition,” said Attizzani. “If we put them on warfarin, and they have a bleeding complication down the road that was triggered by the leaflet thrombosis, I don’t know then if this is benign.”

Right now, physicians also have very limited data to help them make decisions about antithrombotic strategies following TAVR. There are ongoing studies testing various antithrombotic treatment strategies, including GALILEO, ATLANTIS, and POPULAR-TAVI, which will hopefully provide some direction on the appropriate antiplatelet or anticoagulation therapy after the procedure, as well as in patients with leaflet thrombosis.

Roughly One in Seven Patients With Leaflet Thrombosis

I think it’s too soon to call it a benign condition. Guilherme Attizzani

In the German study, 1,424 patients underwent TAVR between 2012 and 2017 and CTA was performed a median of 5 days after the procedure in 754 patients. In terms of valves used during TAVR, 80.3% received a SAPIEN 3 or SAPIEN XT (Edwards Lifesciences) balloon-expandable valve and 14.5% were treated with a CoreValve or Evolut R (Medtronic) self-expanding valve. The remainder of patients received various other valve types. CTA was not performed in 670 patients because of impaired renal function or renal failure, denial of repeat CTA, or severely reduced general health, among other reasons.

Given the absence of stroke/TIA risk, the researchers suggest it is reasonable to withhold anticoagulation in patients with CTA-documented leaflet thrombosis. At their center, Ruile said they keep a close watch on patients and recommend a follow-up CTA if there are clinical signs of valve obstruction and/or changes on echocardiography.

“At our center, we have a very close look at the patients and see the patients every 3 to 5 months to look at the mean [aortic] pressure gradient on echocardiography,” he said. “If you see any elevation in the pressure gradient, then we’ll go to CTA. If we see a large thrombus, then we’ll start anticoagulation.” He said they are careful in their use of anticoagulation because there is a substantial bleeding risk in their mostly elderly patient population.

Ruile said they are planning further follow-up, including follow-up CTA, with their TAVR patients to determine what risks thrombosis might pose to the leaflets and the potential for valve deterioration.

Raj Makkar, MD, and Tarun Chakravarty, MD (Cedars-Sinai Medical Center, Los Angeles, CA), two researchers who previously linked leaflet thrombosis to an increased risk of TIA, point out in an editorial that neurological events in the present study were not independently adjudicated by a stroke neurologist. The incidence of stroke and TIA after TAVR depends highly on the rigor of follow-up and whether a mandated assessment by a stroke neurologist is included in the study protocol.

To TCTMD, Ruile agreed, adding that it remains a particular challenge to formally document TIAs in such an elderly population.

“If you ask a TAVR patient did you have any neurologic problems in the last year, one-third will tell you they had some problems with concentration or they have visual problems,” he said. “It’s pretty hard to diagnose TIA very carefully. Basically, you should have an MRI before and after TAVR, but nobody is performing this so it’s hard to say if this is really a TIA after TAVR.”

In their editorial, Makkar and Chakravarty note that the definition of leaflet thrombosis can vary from study to study. Here it was defined as hypoattenuated leaflet thickening with or without rigidity or reduced leaflet motion. Studies such as their own that have reported an association between subclinical leaflet thrombosis and TIAs used a definition that likely identified a more advanced stage of thrombosis.

Like Ruile, the editorialists say data on the impact of leaflet thrombosis on the valve is still lacking. Imaging substudies mandated by the US Food and Drug Administration as part of the low-risk TAVR trials will provide data on valve durability.

“One important piece of data in the field will come from the low-risk trials,” Attizzani told TCTMD. “These patients are going to live longer, and we’re going to be able to understand what happens to folks who have leaflet thrombosis long-term.” As part of the study, surgical and TAVR patients are undergoing routine CTA, he added, which will help physicians get a handle on the long-term implications as well as the best way to manage the risks of leaflet thrombosis, he added.