In a small series, use of a depth guard reduced the rate of permanent pacemaker implants in half, which had been the device’s Achilles heel. 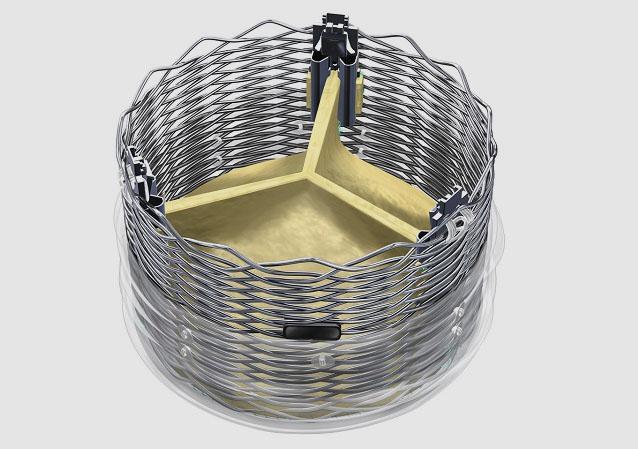 WASHINGTON, DC—The introduction of a depth guard to the Lotus transcatheter aortic valve replacement system (Boston Scientific) appears to have significantly reduced the risk of pacemaker implantation with the device, new research shows.

In a small series, just 16% of patients who received the Lotus valve with depth guard had a permanent pacemaker implanted at discharge, a rate that is significantly lower than what has been reported in prospective and postmarketing studies. Although the Lotus bills itself as offering controlled expansion and precise deployment, the high historical rate of pacemaker implantation has been one of the major drawbacks of the device, according to investigators.

“In prospective studies, the rate of pacemaker implantation is 30% or higher and that is one of the Achilles’ heels of the technology.” lead investigator Nicolas Van Mieghem, MD (Thoraxcenter, Zuid-Holland, the Netherlands) told TCTMD. “If we’re going to move to lower-risk patients, younger patients, patients with longer life expectancies, you might expect some issues [with a pacemaker] down the road.”

Speaking during the late-breaking clinical trials session at CRT 2017 in Washington, DC, Van Mieghem presented data on 50 patients implanted with the Lotus valve with depth guard. The patients were enrolled at six European centers and were treated with the 23-mm and 25-mm valves. The mean patient age was 81 years and the average STS score was 4.4%, which reflects real-world European practice, said Van Mieghem.

He explained to TCTMD that the device used in this RESPOND extension study is not the second-generation Lotus Edge, which has CE mark approval, but rather an interim Lotus design incorporating the depth guard. The depth guard is also part of the Lotus Edge device, but the TAVR system used in the current study does not have the Edge’s lower profile and more flexible delivery system.

“The depth guard is a new feature that allows for improved and more accurate positioning,” he said. “You can predict where you want to land with your device and it will land there.” Van Mieghem said the device is “more bell-shaped,” which prevents the valve from moving into the left ventricular outflow tract where it can interact with the conduction system.

At discharge, there were no patient deaths, although there were three strokes, including two which were considered disabling. Major vascular complications occurred in one patient. Mild paravalvular leak (PVL) was detected in 14.7% of patients but there were no cases of moderate or severe PVL. In total, 84% of patients had mild, trace, or no aortic regurgitation at discharge. A permanent pacemaker was implanted in 8 of 45 pacemaker-naïve patients.

He added that pacemaker implantation rates with Lotus with depth guard are “within the same range” as the next-generation Sapien 3 (Edwards Lifesciences) and Evolut R (Medtronic). “It’s no longer the outlier,” said Van Mieghem.

To TCTMD, Van Mieghem noted that in the 50 implantations, device repositioning was successfully performed in 16 patients. Repositioning included a partial or complete resheathing and redeployment into a more accurate position within the aortic valve annulus.

“I think it’s an interesting valve as it allows the operator very precise valve positioning and it gives you the opportunity once the valve is fully implanted [to] make an assessment to see whether the positioning is good, if there is regurgitation, if the coronary arteries are patent,” said Van Mieghem. “If you’re not happy, you can start all over again.”

Ron Waksman, MD (MedStar Heart and Vascular Institute, Washington, DC), who moderated the session, said “the elephant in the room” has always been the rate of pacemaker implantation, and operators have been aware that rates were significantly higher with the Lotus first-generation valve. While the reduction in pacemaker implantation in the current study is significant compared with the RESPOND postmarketing study, this may also reflect selection bias with patients who have more favorable anatomy being included in this series, Waksman observed. What is needed is a propensity-matched analysis comparing patients with similar anatomy and risks for conduction disturbances after TAVR.

“It’s a very small series so we really have to look at this very closely,” said Waksman.

Similarly, Carlo Di Mario, MD (Royal Brompton Hospital, London, England), commented that repositioning the valve “is, in a way, correcting a mistake,” and it would be better if this did not need to occur, particularly given the risks of calcific embolization.

Van Mieghem agreed, noting that valve repositioning in the large postmarketing study was a predictor of permanent pacemaker implantation. He said operators in the six centers were still learning how to use the modified Lotus with depth guard and that repositioning rates will improve over time. At his center, they reposition the device in less than 10% of implants.

Finally, Didier Tchétché, MD (Clinique Pasteur, Toulouse, France), cited the rate of mild paravalvular leak with the Lotus device, pointing out it was higher than the 7.7% observed in the RESPOND postmarketing study. Van Mieghem pointed out to TCTMD that the clinical significance of mild PVL remains uncertain, adding that the rate of mild PVL seen in their study is still lower than that seen with other available devices.