Unsurprisingly, patients with BNP/NT-proBNP values above the median were more likely to be hospitalized or die in COAPT. 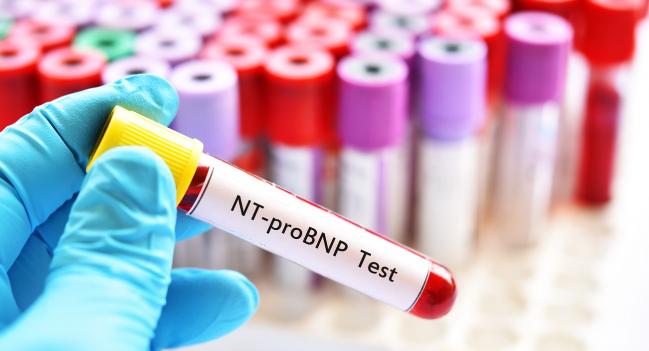 ATHENS, Greece—New data from the COAPT trial indicate that MitraClip therapy for functional mitral regurgitation (FMR) improves outcomes as compared with guideline-directed medical therapy (GDMT) alone across the spectrum of baseline BNP/NT-proBNP levels of patients enrolled in the trial.

When patients were stratified according to whether their baseline levels were above or below the median BNP/NT-proBNP levels in the trial, both biomarker groups had lower rates of the combined endpoint—heart failure hospitalization and all-cause mortality—if they received the MitraClip on top of GDMT versus GDMT alone. Not surprisingly, patients with lower baseline BNP/NT-proBNP levels at the study outset, regardless of randomization, were less likely to experience heart-failure hospitalizations, all-cause mortality, or a combination of the two, as compared with patients with higher baseline levels of this prognostic marker.

“The fact that the baseline BNP value predicts the mortality is not unexpected,” Abraham told TCTMD. “We already know that higher BNP is associated with higher rates of morbidity and mortality, and lower BNP with lower rates, but what was important to demonstrate was that there wasn’t a difference in the patients’ response to MitraClip based on their BNP.”

Qualifying BNP and NT-proBNP values for the COAPT trial were ≥ 300 pg/mL or ≥ 1500 pg/mL, respectively, or a prior heart failure hospitalization. For the current analysis, COAPT investigators calculated median BNP values for all COAPT patients, using NT-proBNP values if BNP were not available.

As Abraham showed, median BNP in the trial was 648 pg/mL and median NT-proBNP was 3089 pg/mL, and the distribution of patients with or without prior hospitalization was balanced across the biomarker groups.

Looking at biomarker levels in relation to the primary endpoints in COAPT, Abraham and colleagues found that patients above the median values for the combined biomarker values, who were treated with GDMT only, had a 24-month risk of heart failure hospitalizations or all-cause mortality of nearly 82%, while those with values below the median experienced the primary endpoint at a rate of 52%.

“Those rates were reduced with the MitraClip by 48% in those patients with BNP/NT-proBNP above the median, and [the primary endpoint] was also significantly reduced in those patients with a BNP/NT-proBNP less than the median,” Abraham said. The P value for the interaction between the BNP groups was “highly insignificant,” he noted, indicating that the effects of MitraClip were the same in patients regardless of their baseline BNP or NT-proBNP values.

Regardless of treatment allocation, “baseline BNP was predictive of the overall event rate with higher risk associated with higher BNP or NT-proBNP levels,” said Abraham.

We already know that higher BNP is associated with higher rates of morbidity and mortality, and lower BNP with lower rates, but what was important to demonstrate was that there wasn’t a difference in the patients’ response to MitraClip based on their BNP. William T. Abraham

For quality-of-life scores, there was “little difference” in the response to MitraClip according to baseline BNP/NT-proBNP levels, with both groups benefiting from the clip as compared with GDMT alone. Likewise, both biomarker groups improved their performance on the 6-minute walk test, although the difference was particularly marked among patients with the higher biomarker values at baseline.

Asked by TCTMD about the rationale for doing this particular analysis, Abraham noted: “In many drug trials, BNP has been evaluated in this way and has proven to be useful, and proven to be a useful predictor of outcomes. But it hasn’t been used very commonly in device trials, so we thought this was a great opportunity since we’d collected the data.”

MITRA-FR senior investigator, Nathan Mewton, MD, PhD (Hôpital Cardiovasculaire Louis Pradel, Lyon, France), was the discussant for Abraham’s presentation today. As previously reported, MITRA-FR was the other recent RCT of the MitraClip in patients with heart failure complicated by moderate-to-severe mitral regurgitation. It famously did not deliver the same win for the clip versus medical therapy as COAPT, a discrepancy that has been much-debated in the wake of the trials’ presentation.

“This analysis shows something that we’ve known for a very long time now, which is that BNP levels are prognostic in heart failure patients and this is not something new,” Mewton said. “This actually shows that those patients [in COAPT] were really severe HF patients.”

Limitations, said Mewton, of the current analysis included questions of how BNP and NT-proBNP levels were combined, particularly since they were measured at individual trial sites and not a centralized process for 93% of the COAPT population. The other and “more intriguing” question, said Mewton, is how the analysis adjusted for a COAPT detail that he’s pointed to elsewhere at this meeting, namely that MitraClip-treated patients had significantly better renin-angiotensin system blocker and beta-blocker optimization than GDMT-treated patients in COAPT.

“For the next subanalysis,” said Mewton, “it would be interesting to adjust for the medical baseline therapies, knowing that there was a misbalance—a difference—as the clip group had better medical treatment compared to the control group.”

My Takeaways From TCT 2018: Sunglasses, Shadows, and the COAPT Eclipse