Tools like portable imaging devices may be particularly important in underserved parts of the globe, potentially impacting mortality. 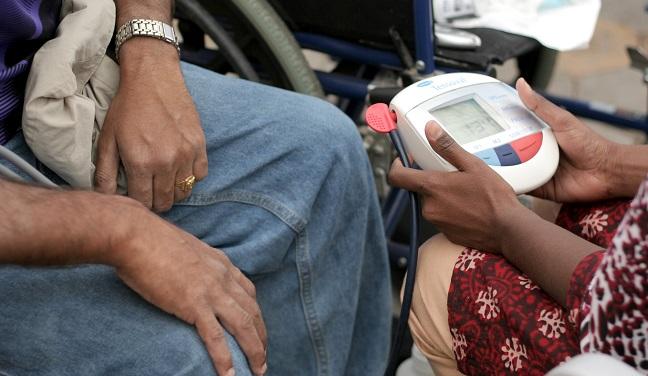 Mobile health (mHealth) technologies, particularly in parts of the globe with less access to standard diagnostic technology and care, may help with swifter diagnosis and treatment decisions in patients who present to tertiary care clinics with structural heart disease, new research indicates.

Data from the philanthropic American Society of Echocardiography Foundation-Valvular Assessment Leading to Unexplored Echocardiographic Stratagems (ASEF-VALUES) study show that patients treated at clinics equipped with these tools had shorter delays to treatment and were less likely to die or be readmitted to the hospital over time.

Although technology has been seamlessly integrated into human social life in a beneficial way, uptake has been slower in standard, clinic-based physical exams, senior author Partho P. Sengupta MD, DM (West Virginia University School of Medicine, Morgantown), told TCTMD. Given the evolution of technologies like smartphone-based apps that track activity as well as miniaturized diagnostic imaging devices, Sengupta and his team hypothesized that if implemented correctly in the clinic, these technologies could “shrink” decision-making time and affect patient outcomes over time.

For their study, published online this week ahead of print in JACC: Cardiovascular Imaging, Sengupta and colleagues randomized 253 patients with suspected structural heart disease in India to be assessed at standard tertiary care facilities or those equipped with technologies like pocket echocardiography, smartphone-connected ECG, digital blood pressure and oxygen measuring devices, activity monitoring, and portable laboratory testing. All patients were evaluated over a 3-day period in August 2014 and followed for a mean of 337 days.

At baseline, 46% of the study population exhibited symptoms in line with NYHA class II-III heart failure, with no differences between the groups.

Following their work-up, 34% of the overall population underwent treatment with valve replacement or valvuloplasty, with those initially assessed by mHealth-enabled clinics showing a trend towards more frequent treatment than those who visited standard clinics (34% vs 32%; P = 0.07). Notably, the mHealth cohort had a much shorter time to referral for valve replacement or valvuloplasty than the standard of care arm (83 vs 180 days; P < 0.001).

A Call for Greater Integration of mHealth

“These findings are representative of a cross-sectional sample of patients commonly seen in endemic regions where patients often present late in the disease process and with advanced symptoms,” the study authors write. “Within India, a 6-24-month waiting period for cardiac procedures and cardiothoracic surgery is commonly observed in nonprofit and government-run hospitals. In these health systems, determination of severity of disease and prioritization of sicker patients is of paramount importance.”

Although waiting for treatment can lead to increased morbidity and mortality, many patients in rural areas are faced with various socioeconomic factors that prevent them from receiving timely treatment, they add.

If tertiary care facilities were equipped with mHealth technologies, diagnostic and treatment decision times could be slashed and outcomes would improve, Sengupta said. This is particularly important in regions where patients tend to not seek treatment until their symptoms are advanced. By the time patients make their way to a clinic, “they are sick, they have an underlying disease problem. Sometimes they understand the problem, sometimes they don't,” he explained. “Having [mHealth in the] armamentarium gives the physician the ability to be more precise, assess the patient's severity, and prioritize them for procedures.

“This study suggests that there is a role for rapid decision-making and triaging using modern technology and that can be implemented at the level of a clinic,” Sengupta continued.

There may be broader implications for physician-patient interaction, he added. There is “no reason” to ask patients questions about their ability to walk or some of their symptoms when specific answers can be determined through activity monitors, he noted.

“What happens also is many patients downplay their symptoms,” Sengupta said. “These diseases develop over a period of time, so they adapt to it and they don't sometimes claim to be symptomatic. They might say I’m ok, but they’re not ok.”

Physicians in general need to be more quantitative in their assessment of patient symptoms, he argued. “What we are trying to address is how doctors can be smarter by just taking this information from [patients] and understanding the extent of disease severity and then quickly making the decision,” Sengupta said.

To move the field forward, “we need to see the same kinds of studies happening on larger levels” and potentially in other settings, he said, adding that he has enacted an mHealth program at his institution. There is also a need to assess how other types of mHealth technologies, including artificial intelligence, might be able to speed things up even further, although questions around training and quality remain. Further improvements in ease of use and automation might allow healthcare workers with less medical training to perform certain tests and get patients referred even earlier, he added.

In an editorial accompanying the paper, Mariana Mirabel, MD, PhD (INSERM Paris Cardiovascular Research Center, France), and Luigi Badano, MD, PhD (University of Padova School of Medicine, Italy), write that “the advantages of mHealth would indeed be particularly relevant in low- and middle-income countries (LMICs) where the prevalence of noncommunicable diseases (NCDs) is increasing rapidly. Triage of patients by means of point-of-care echocardiography has the potential to improve access to healthcare without overwhelming these fragile systems.”

The benefits of mHealth technologies are low cost and high portability, both of which translate into making these “devices more accessible to a wide range of practitioners in different settings, in hospitals and in the community,” they say.

However, improvements are needed, Mirabel and Badano write. In this study, “local physicians supervised by level III [American Society of Echocardiography] sonographers undertook point-of-care echocardiographic examinations following a predefined acquisition protocol. Therefore, these results may not be translated to settings were less skilled and trained workforce is available.” Also, a lack of physicians in remote areas of the world also speaks to the increased need for training nonphysician healthcare workers in how to use these technologies, they say.

While the study is “hopeful” and presents “great ideas,” another general issue with mHealth is the “digital divide with elderly minority patients and everyone else, especially young educated people,” said Lynne Perry-Bottinger, MD (NewYork-Presbyterian Hospital, New York, NY), who commented on the study for TCTMD via email. This poses a potential issue, she said, for instances in which a patient is asked to track something at home on his or her smartphone or sync an activity tracker with an online database.

Cost is yet another dilemma. Sengupta argued that while he has not conducted such an analysis of these devices, “it’s pretty much obvious that they would be cost-effective” given the downstream morbidity and mortality improvements seen in this study and that these technologies are relatively inexpensive. Still, upfront costs to the patient, however small, might not be feasible for many people around the world, Mirabel and Badano note.

Perry-Bottinger also pointed out the need for physician buy-in and, in the United States, a Center for Medicare & Medicaid Services-certified billing code attached to these activities so that reimbursement can be properly handled. “That being said, sometimes too much information makes it difficult to find what is critical,” she said, so the incoming information from mHealth devices would have to be interpreted on a per-patient basis.

COMPASS: All Signs Point to Big Impact in CAD and PAD, Experts Predict