As data come in from big hospital networks and across countries, physicians are urging health administrators to learn the lessons.

Reports of plunging hospitalizations for myocardial infarction during the COVID-19 pandemic continue to mount, with nationwide data from Italy showing that acute MI admissions were almost halved during one week at the peak of the pandemic there. That drop mirrors one seen Northern California between March 4 and April 14, 2020, across the Kaiser Permanente health system covering more than 4.4 million residents.

The Italian survey was a first-of-its-kind collaboration between the Società Italiana di Cardiologia and the Italian Cardiac Care Unit (CCU) Academy investigators group, according to lead author Salvatore De Rosa, MD (Magna Græcia University, Catanzaro, Italy). Senior author Ciro Indolfi, MD (Magna Græcia University), speaking via Zoom, showed TCTMD the photo he took of his empty, 12-bed cardiac care unit (CCU) on March 14. This, he said, was the impetus for the study and led to the selection of March 12-19 as the focus for data collection.

De Rosa, Indolfi, and colleagues pooled information on consecutive admissions of patients with acute MI in intensive CCUs from 54 hospitals across Italy, using what Indolfi characterized as a “simple” survey. Hospitals supplied information on MI category (STEMI or NSTEMI) and the time from first medical contact to revascularization for STEMI patients, as well as details on presentation. Surveys also offered hospitals the option of including details on other types of CCU admission.

Compared with the same week in 2019, admissions for all acute MI during the week of March 12-19, 2020, were reduced by 48.4%. For STEMI, the reduction was 26%, and for NSTEMI, 65.1%. The decline in admissions was more marked in women (41.2%) than men (17.8%). In a striking finding, the reduction in acute MIs was similar across regions, even though hospitals in South and Central Italy were not as overwhelmed by COVID-19 as were hospitals in the North.

Cardiologists around the world have told TCTMD that they are seeing more serious and unusual STEMI presentations as a result of hospital avoidance: this appears to be the case in the Italian data. STEMI case fatality rates were significantly higher during this particular week in 2020 than in 2019 (RR 3.3; 95% CI 1.7-6.6) as were the number of complications (RR 1.8; 95% CI 1.1-2.8) such as cardiogenic shock, serious arrhythmias, and cardiac rupture/ventricular septal defect or severe functional mitral regurgitation.

“For sure this is just the tip of the iceberg,” Indolfi said, with both Indolfi and De Rosa stressing the selection bias in their sample given the number of patients who didn’t make it to hospital, or didn’t try to get there. “It’s the STEMI patients I’m speaking about; many others may have stayed away because of fear of infection,” Indolfi said. With STEMI patients, he continued, “we saw many complications that we describe in paper: left ventricular dysfunction, ventricular septal defects, ischemic mitral regurgitation.”

Of note, investigators also saw similar and statistically significant reductions in the rate of hospitalizations for heart failure (by 46.8%) and atrial fibrillation (by 53.4%), as well as substantial drops in the number of visits for implantable device failures and pulmonary embolism, although low number of cases meant these differences were not statistically significant.

“While healthcare systems along with public opinion, media, and patients were focused on the COVID-19 pandemic, a worrying reduction in admissions for AMI was observed across Italy with a parallel increase in case fatality and complication rates,” the authors conclude. “Timely adoption of countermeasures must be considered to avoid a large and long-standing social impact.” 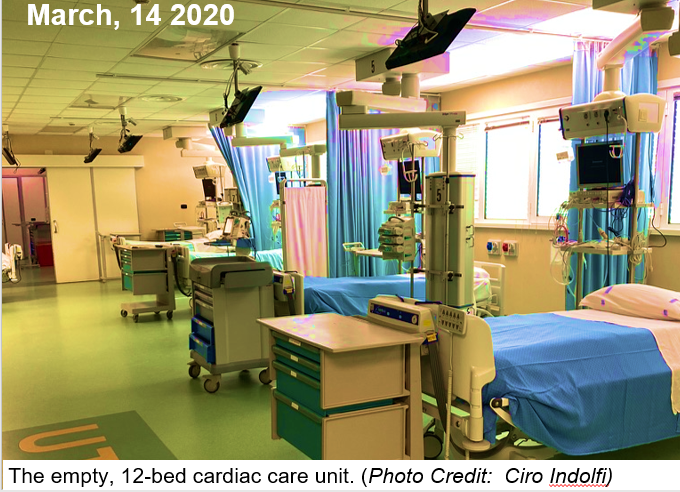 How to best convey to patents that it is safe to go to a hospital with symptoms is a lesson that must be learned from this once-in-a-lifetime crisis, De Rosa stressed. And the impact of this won’t be felt for some time. “This [paper described] a selection of what would have been the worse cases, so people with less-pronounced disease may have just stayed at home and we don’t have the data,” De Rosa said. “This will be of course something we will get in months and years to come: the people who have stayed at home or people who will develop the consequences of untreated myocardial infarction. We have to remember that heart failure is the main consequence of untreated myocardial infarction and this has a high social burden, characterized by very high mortality with shortened life expectancy.”

Indolfi added that he’s “optimistic” that some good may come of this, pointing to the major cuts to the national healthcare program over the last decade, cuts he expects to be reversed in the years ahead.

The Kaiser Permanente data come from 21 medical centers and 255 clinics in Northern California. Matthew D. Solomon, MD, PhD (Kaiser Permanente Oakland Medical Center, Oakland, CA), and colleagues looked at the weekly rate of hospitalization for STEMI and NSTEMI before and after the first reported COVID-19 death in the region: January 1 to March 3, 2020, versus March 3 to April 14, 2020. They also looked at incidence rates for the whole study period as compared with the same stretch in 2019.

For the before-and-after comparison, expressed as an incidence rate per 100,000 person-weeks, the rate declined from 4.1 to 2.1, with similar reductions seen in both STEMI and NSTEMI patients. The decrease seen in the COVID-19 period (March 4 to April 14, 2020) as compared to the weeks prior was echoed in the comparison with 2019 numbers.

Importantly, note Solomon and colleagues, patient characteristics, including hemodynamic and vital signs, troponin patterns, and presence of coexisting conditions were all similar in patients hospitalized during the COVID-19 window as during the prior control periods.

Speaking with TCTMD, Solomon pointed to the fact that, as was seen in Italy, the decrease in admissions seemed unrelated to the severity of COVID-19 cases hitting the hospital system. Northern California hospitals, he observed out, have not been swamped with cases.

“This is an area where we've been heavily praised for our response to flattening the curve and suppressing the COVID-19 pandemic, we had some of the earliest and most widespread shelter-in-place policies that were implemented throughout the Bay area, even before the State of California did that. Even though we did have a surge of patients this was nothing near what we saw in New York and nothing near what happened in Northern Italy, yet we still saw this extremely dramatic decline for acute emergencies,” Solomon said. “This goes to show that it's not just how bad the COVID pandemic is in your area—patients are reacting really strongly just to the background fear.”

If there is another surge of SARS-CoV-2 in the fall, as some have predicted, “hopefully this will really be a wake-up call for physicians and also healthcare systems and policy makers to think about what the unintended consequences can be [in terms of] the public's,” Solomon said. “We saw this once. We don't want to see this again and be in the same situation.”

Senior author Alan S. Go, MD (Kaiser Permanente Northern California, Oakland, CA), also speaking with TCTMD, said that this type of messaging needs to be a part of the telehealth visits doctors are now conducting with patients. On these telephone and video check-ins, he said, “we need to make sure that we're identifying the highest risk patients and emphasizing the need for primary and secondary prevention. [We also should emphasize] that patients recognize their symptoms and get care right away, and reassure them that our hospitals are safe and ready to take care of them.”

On Record: Missing STEMIs Amid COVID-19

The Mystery of the Missing STEMIs During the COVID-19 Pandemic