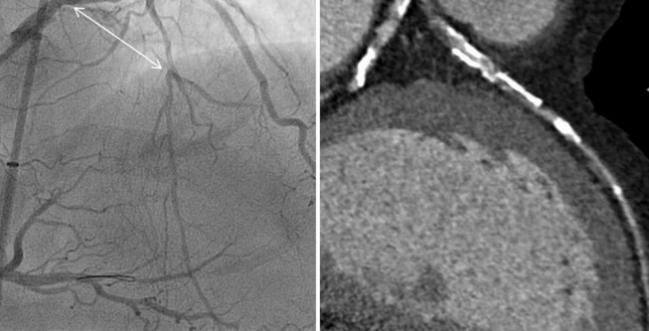 For patients referred for evaluation of stable angina, a tiered protocol progressing from calcium scans to CT angiography (CTA) to CT myocardial perfusion imaging (MPI) appears to be a viable alternative to standard functional testing, the CRESCENT-II trial shows, although larger trials are needed to confirm the results.>

The CT-based approach reduced the rate of invasive coronary angiograms without a class I indication for revascularization compared with functional testing (primarily exercise ECG) through 6 months (1.5% vs 7.2%; P = 0.035), according to lead author Marisa Lubbers, MD (Erasmus MC, Rotterdam, the Netherlands), and colleagues.

The overall number of invasive angiograms performed was similar in both groups, but a greater proportion led to a class I revascularization indication in the CT arm (88% vs 50%; P = 0.017), the researchers report in a study published online December 13, 2017, ahead of print in JACC: Cardiovascular Imaging. Moreover, additional testing was less frequently needed in the CT arm (13% vs 37%; P < 0.001).

“In patients with stable angina and a typically low CAD prevalence, the challenge is to accurately rule out CAD in the majority by relative simple means, while comprehensively assessing those who may benefit from revascularization,” Lubbers et al write. “A tiered, comprehensive cardiac CT protocol, including dynamic perfusion imaging, appears to be a fast and efficient alternative to standard functional testing in these patients.”

They note, however, that the findings should be confirmed in larger studies that include comparisons to other strategies.

Coronary CTA has emerged as an option for diagnosing patients with suspected CAD, and both the PROMISE and SCOT-HEART trials have shown that it performs well when compared with functional testing in patients with stable angina. But CTA alone may not provide all of the information clinicians need to make decisions.

“Although coronary CTA effectively rules out coronary disease, it is limited in its ability to assess the hemodynamic importance of angiographic lesions,” the authors explain, noting that the addition of MPI to CTA might address that shortcoming and ultimately reduce the use of invasive angiography in patients who do not have hemodynamically significant disease.

Building on the results of the CRESCENT-I trial, which showed that incorporating calcium scans in a tiered CT evaluation strategy was safe and effective, Lubbers et al designed the CRESCENT-II trial to assess the utility of a tiered, comprehensive CT protocol.

The trial, conducted at four Dutch centers, included 268 patients with stable angina who were referred for evaluation of suspected CAD and randomized to CT-based testing or standard functional testing (symptom-limited exercise ECG in 95% of patients, with SPECT MPI or stress echocardiography performed if exercise-ECG was contraindicated or noninterpretable/equivocal).

The CT protocol started with a calcium scan, followed by CTA if any calcium was detected or if patients had a greater than 80% pretest probability of CAD in the absence of calcium. Patients with more than 50% stenosis on CTA underwent CT MPI. When substantial myocardial ischemia was detected, patients were referred for invasive angiography, with the rest treated with medical therapy.

Compared with standard functional testing, the CT-based strategy lowered the rate of invasive angiograms without a class I indication for revascularization according to European Society of Cardiology guidelines (primary endpoint) and increased the diagnostic yield of invasive angiography without spurring more overall angiograms.

Most patients in both trial arms received a final diagnosis on the same day as the outpatient clinic, but the proportion was higher in the CT group (87% vs 64%; P < 0.001).

Though the cost of index testing was higher with the CT-based approach, there was no significant difference between groups in cumulative diagnostic costs.

Looking at patient outcomes—something the study was not powered to detect—there was no difference between arms in the proportion of patients who reported being free of anginal symptoms. Improvement in quality of life was similar in both groups.

“As scanner and data processing technology further develop, the comfort of use and radiation exposure of dynamic CT MPI will likely improve,” Lubbers et al note.

Commenting for TCTMD, Y. Chandrashekhar, MD (University of Minnesota/Minneapolis VA Medical Center), said there are a few lessons that can be taken away from the CRESCENT-II results.

The first is that it’s important to keep an open mind about stress testing in patients with stable CAD because angiograms will not be needed in everyone, said Chandrashekhar, who co-authored an accompanying editorial with Leslee Shaw, PhD (Emory University School of Medicine, Atlanta, GA), and Jagat Narula, MD (Mount Sinai School of Medicine, New York, NY).

“For stable angina, marrying anatomy with physiology seems to be the way to go, both to correctly select patients who would benefit from an angiogram and then also help us understand what to do after we get an angiogram,” he said.

The second takeaway is that the tiered, CT-based protocol included in CRESCENT-II, “where coronary calcium is a gatekeeper to further testing, may be a very effective strategy down the road,” Chandrashekhar said, agreeing with the study investigators that more robust trials are needed before the approach can be recommended.

That call for more definitive studies also applies to imaging as a whole, he added, as the field is lacking the types of large trials seen for interventions or heart failure, for example.

“Imaging needs to catch up,” he said. “It’s difficult to do imaging trials because we are just a diagnostic modality. Someone has to act on those findings down the road. But I think we need to start going in that direction if we [want] to be very credible about these millions of tests that we do in our patients.”