Nearly Half of Interventional Cardiologists May Have Pre-Cataract Lesions 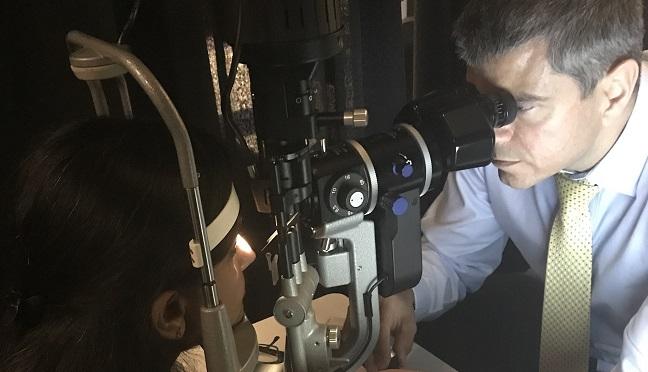 NEW ORLEANS, LA—Up to half of interventional cardiologists who are exposed to ionizing radiation in the cath lab may have early evidence of eye changes that could eventually become cataracts, according to data from a small study.

“Studies in cosmonauts, Chernobyl disaster survivors, and others have shown an association between ionizing radiation and damage to the lens, specifically an area that has been traditionally considered the most radiosensitive, which is located in the posterior,” said Aris Karatasakis, MD (University of Texas Southwestern Medical Center, Dallas), in an interview with TCTMD.

Last year at the Society for Cardiovascular Angiography and Interventions (SCAI) meeting, as reported by TCTMD, Karatasakis and colleagues including Emmanouil S. Brilakis, MD, PhD (Dallas VA Medical Center, TX), conducted eye exams as part of the iC-CATARACT program to look for these posterior subcapsular cataracts among attendees.

Speaking with TCTMD this year at the SCAI 2017 Scientific Sessions—the data have not yet been formally presented or published—Karatasakis reported that 117 participants were consented into the study. These included 99 people who were interventional cardiologists, vascular surgeons, or other healthcare providers who filled out a survey while attending SCAI 2017 and were confirmed to be exposed to occupational radiation, as well as 18 controls drawn from exhibitors, research professionals, and others with no occupational exposure to radiation.

“In the 99 exposed participants who were consented and examined with a slit lamp, we found that the prevalence of these relatively minor, but potentially pre-cataract lesions was approximately 47% compared with 17% in the control group, which was found to be a statistically significant relationship,” Karatasakis said. The difference persisted after multivariable adjustment for age, smoking, and diabetes. However, there was no difference between the occupational exposure and nonexposure groups for more serious eye disorders.

Karatasakis said the lesions, which appear as small vacuoles on the lens, have the potential to become serious, and while some may be reversible, their presence is strongly correlated with cataract development and need for laser removal.

If people feel compelled after all this to be more careful and take more precautions with radiation-reducing measures in the cath lab—that is the goal of our study. Emmanouil S. Brilakis

“So, while these were not visually impairing lesions, we believe that given the body of evidence connecting even such minor changes to an increased propensity for cataract, they are definitely something to keep track of,” he said, adding that “many of [the attendees] were completely unaware that they had any findings on their lens until they came in for the screening at SCAI.”

Among the other, more serious findings of which patients were unaware they had, Brilakis said, there were instances of high intraocular pressure and abnormalities of the retina.

“I had many informal conversations with people about their findings,” he added. “There were some who were super concerned, but the majority actually took it well and found it reassuring that they didn’t have more changes than what we found.”

The bottom line, Brilakis said, “is if you have exposure to radiation you have much more likelihood of pre-cataract lesions than if you are not. And, although they are not yet visually impairing, you don’t want them. If people feel compelled after all this to be more careful and take more precautions with radiation reducing measures in the cath lab—that is the goal of our study.”

Brilakis noted that the full the data from the eye exam study has been submitted to a journal for publication and is currently under review.

Avoiding Gluten May Backfire in Terms of Coronary Risk in the General Population, Study Suggests

Registry Study Makes Case Against Vena Cava Filter Use in Trauma Patients, but Experts Say Not So Fast

#SoMe for #SciComm? Cardiologists See Value in Social Media, With Some Caveats