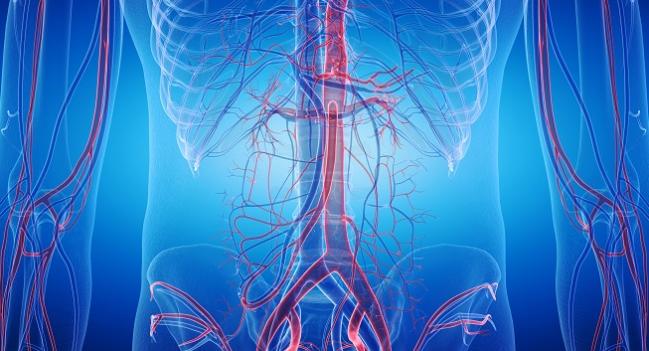 Through up to 14 years of follow-up, the risk of dying from any cause does not differ between patients who underwent endovascular repair of their abdominal aortic aneurysm (AAA) and those who had a traditional open repair, long-term results of the OVER trial show.

Findings from the trial, which was conducted among US military veterans, contrast in some respects with those from two European studies—EVAR-1 and DREAM. Those trials similarly showed no significant differences in terms of overall mortality over the long term. However, they both also demonstrated a much higher risk of reintervention with endovascular versus open repair and evidence of a late mortality disadvantage for the endovascular approach.

One of the co-chairs of OVER’s executive committee, Julie Freischlag, MD (Wake Forest Baptist Health, Winston-Salem, NC), told TCTMD the main difference between the European trials and OVER involved endograft durability, which appeared poorer in EVAR-1 and DREAM. OVER didn’t support those concerns, said Freischlag, who noted that the better results here could be due to the use of newer endografts or closer follow-up of patients compared with the older trials.

“That’s the big thing we think the trial is important for: not only do [the patients] live, but the grafts are durable,” she said.

Not only do [the patients] live, but the grafts are durable. Julie Freischlag

The new findings were published in the May 30, 2019, issue of the New England Journal of Medicine by the OVER Veterans Affairs Cooperative Study Group. The lead author is listed as Frank Lederle, MD (Minneapolis VA Medical Center, MN), who served as the other co-chair of the trial’s executive committee up until his death in January 2018.

In multiple trials, including OVER, EVAR-1, and DREAM, endovascular aneurysm repair (EVAR) has been shown to carry a lower risk of perioperative mortality compared with open repair, an advantage that is lost after 3 or 4 years due to catch-up deaths in the endovascular arm. That raises the possibility that over a long enough time span, survival might be better after open repair, as suggested by at least one of the European trials.

The OVER investigators explored that possibility in this new analysis, which has a follow-up of up to 14 years (mean 8.4 years). The trial, conducted at 42 VA medical centers between October 2002 and April 2008, initially randomized 881 patients with asymptomatic AAAs to either EVAR or open repair.

Most patients died during the extended follow-up, with no statistical difference between the EVAR and open-repair arms (68.0% vs 70.0%; HR 0.96; 95% CI 0.82-1.13). Though survival appeared to favor EVAR in the first 4 years of follow-up, open repair between years 4 and 8, and then EVAR again beyond that, none of the trends was statistically significant.

Looking at specific causes of death, those related to the aneurysm occurred at a numerically—but nonsignificantly—higher rate in the open-repair group (3.7% vs 2.7%), with most occurring in the perioperative period. Death from chronic obstructive lung disease was also more frequent in the open-repair arm (8.2% vs 5.4%), with the difference falling just shy of statistical significance.

Other outcomes favored open repair. Aneurysm rupture was seen in 1.6% of patients in the EVAR arm and 0.2% of the open arm. Patients undergoing EVAR also were more likely to require secondary procedures (26.7% vs 19.8%).

What Does This Change for Treatment Selection?

Asked about how to interpret the long-term results of OVER, EVAR-1, and DREAM in terms of making clinical decisions about patients requiring AAA repair, Freischlag said patients with an expected survival of at least 5 years who have an aneurysm of 5.5 cm or larger and who have anatomy amenable to EVAR should undergo the less-invasive intervention.

On the flip side, if a patient does not have anatomy that lends itself to EVAR, putting in an endograft will simply lead to increases in secondary procedures and ruptures, Freischlag said. “So those patients—if physiologically appropriate—should have an open repair. And they would have a little bit more upfront mortality, more time in hospital, and then probably longer time to go back to work.”

It depends a lot on . . . whether a patient has got the right morphology for endovascular repair, because I think it’s foolish to try to put in an endograft if it’s not within the instructions for use. Janet Powell

Commenting for TCTMD, Janet Powell, MD, PhD (Imperial College London, England), a member the trial management committee for EVAR-1, said the general consistency between OVER, EVAR-1, and DREAM in terms of overall mortality during long-term follow-up means that these new results will not impact clinical decision-making about AAA repair going forward.

“I don’t think in actual fact it changes very much,” she said, adding that anatomy will continue to play a key role in choosing between EVAR and open repair.

“I think it depends a lot on the actual shape or morphology of the aorta and whether a patient has got the right morphology for endovascular repair, because I think it’s foolish to try to put in an endograft if it’s not within the instructions for use,” she said. “You’re bound to be running into problems.”

She indicated that if the anatomy is suitable for EVAR, that’s probably the way to go. “I think most patients would prefer it and I think surgeons would prefer to offer it. But I think very often the boundaries are pushed and they’re pushed too far,” she said, referring to what she sees as overuse of EVAR. “Then it becomes more like putting a square peg into a round hole.”

Because EVAR comes with an increased need for secondary interventions, it means that these patients need to be followed more closely than those who undergo open repair, Powell pointed out, noting that the added cost of this surveillance could be a consideration when it comes to choosing a treatment in certain healthcare systems.

Powell said that even though multiple trials have now shown good results from either EVAR or open repair out to a decade or more, there is still a question about endograft durability. Even though industry claims the newer devices are more advanced and likely to provide better results than older ones, “many others of us are much more skeptical because there aren’t actually any long-term results,” Powell said.

Thus, it will be important to see long-term results with the newest endografts, some of which don’t yet have 5-year data available, particularly because the randomized trials have shown that these patients can live longer than once thought, she said. That’s certainly good news for patients, she added, “but in terms of the manufacturers, it means they can’t produce a graft that will only last for 10 years. They’ve got to produce something that will last for 20 years.”

Freischlag was less certain about the need to develop endografts that can last for two decades, pointing out that patients develop AAAs at an average age of 72 and not many patients in the trials survived past 10 years.

She added that patients who develop AAAs are not typically in the best of shape. “These are not healthy patients that get infrarenal aneurysms. They are smokers with some genetic predisposition and therefore they have vascular disease, so expecting 20 years survival on them I think is expecting a little too much. I think at 10 years we’ve done well to manage their cardiac diseases and other diseases,” Freischlag said.

At the ESC Heart Failure Congress, Some COAPT Converts—and Some Pushback

Cancer and CV Disease Care: What’s Known? What Lies Ahead for Cardio-Oncology?