The effects of the BackBeat cardiac neuromodulation therapy system will need to be confirmed in a larger pivotal trial.

The response rate was high, with 85% of patients treated with the BackBeat system seeing any reduction in ambulatory systolic BP (versus 53% of controls) and 54% experiencing a drop of more than 10 mm Hg (versus 21% of controls).

There were no differences between groups in terms of MACE rate, diastolic BP, heart rate, or echocardiographic parameters.

“The next step will be the initiation of the pivotal double-blind study to test the safety and the efficacy,” Kuck concluded during his presentation.

We see an immediate drop. And that drop then is maintained over time by tricking . . . the physiology of the cardiovascular system. Karl-Heinz Kuck

Commenting for TCTMD, Michael Weber, MD (SUNY Downstate College of Medicine, Brooklyn, NY), urged caution when evaluating the results because it was a feasibility study and the number of patients was small. “So we should not overinterpret the results that we saw,” he stressed.

Nevertheless, he said MODERATO II explored a group of patients—those in their mid-70s, on average, with a high rate of isolated systolic hypertension—who are not easy to treat, providing findings that were “very encouraging.” He pointed out that the observed reductions in ambulatory and office BP are similar to those seen in studies of renal denervation, another device-based therapy under evaluation for hypertension.

The fact that most patients in the study had isolated systolic hypertension (88.5% of those treated with the BackBeat system and 71.4% of controls) is noteworthy, Weber said, because there has been a belief in some circles that this condition—related to the stiffening of arteries with age—is not amenable to treatment centered on interrupting the sympathetic nervous system, resulting in this condition being listed as an exclusion criterion in renal denervation studies. Weber, a well-known expert in the renal denervation field, disagrees with that stance.

“In a way, [MODERATO II] adds validity to the use of device therapy and I think should act as a spur to those who are doing renal denervation to really focus more seriously on isolated systolic hypertension, because if this procedure . . . is this effective then we ought to see relatively similar results with renal denervation,” he said.

As for BackBeat itself, a larger pivotal trial is well justified based on the MODERATO II results, Weber said, calling it “a very clever system.”

BackBeat cardiac neuromodulation therapy is delivered through an implantable pulse generator that provides typical pacemaker functionality using standard lead positions. Kuck explained that it lowers BP through two mechanisms. First, the algorithm is set to reduce LV filling (or preload) by pacing the heart with an ultrashort atrioventricular (AV) coupling interval. That causes an immediate drop in BP, which would normally result in compensatory measures by the body’s regulatory systems to bring BP back up. The BackBeat system, however, then allows two or three heartbeats with longer AV intervals, tricking the baroreflex mechanism and staving off the increase in BP that would come with activation of the sympathetic nervous system, Kuck said. Thus, the initial fall in BP is maintained over time by reducing afterload.

At a press conference, Kuck summed it up this way: “We start the algorithm. We see an immediate drop. And that drop then is maintained over time by tricking . . . the physiology of the cardiovascular system.”

What is attractive is leveraging a technology that a population already needs. Mintu Turakhia

A prior single-arm study, MODERATO-HTN, showed that the system significantly reduced 24-hour ambulatory systolic BP by about 10 mm Hg at 3 months, with the effect sustained for up to 2 years, Kuck said. 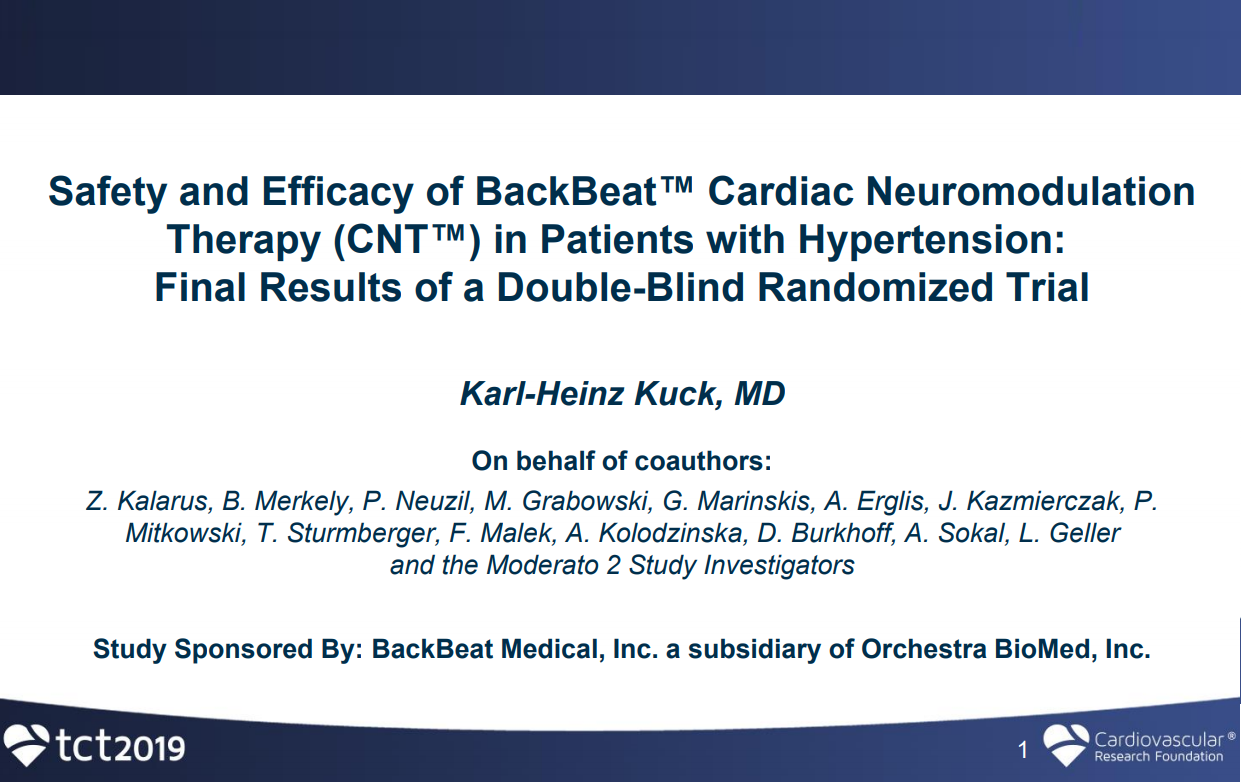 The two groups were well matched at baseline, with an average age in the mid-70s (75 in the control group and 73 in the BackBeat group) and high rates of comorbidities. Patients in both groups were taking an average of 3.3 antihypertensive medications. Average 24-hour ambulatory systolic BP was 136.3 mm Hg in both arms.

The primary efficacy endpoint was the 24-hour ambulatory systolic BP reading at 6 months, which declined by an average of 11.1 mm Hg in the BackBeat group (P < 0.001) and by a nonsignificant 3.1 mm Hg in the control group. The between-group difference was significant (P = 0.01). The findings were similar for office systolic BP.

Although physicians were instructed not to change medications during the study, modifications of treatment regimens were reported in 33.0% of controls and 11.5% of those treated with the BackBeat system. Increases in medications were more frequent in the control group (23.8% vs 7.7%).

In terms of safety, there were only two MACE events reported, both in the control arm: one death resulting from disseminated adenocarcinoma and one case of worsening A-fib requiring electrical cardioversion.

Mintu Turakhia, MD (Stanford University and VA Palo Alto Health Care System, CA), who was not involved in the research, told TCTMD that he finds the approach “very intriguing with a bit of potential,” though MODERATO II is small and preliminary. “What is attractive is leveraging a technology that a population already needs,” he said, referring to pacemakers in patients who already have an indication for them.

“I think this is promising. I think it’s clever. The population of patients with pacemakers would stand to benefit,” Turakhia he said.

He said there are some questions that remain to be resolved, however, including whether the BackBeat algorithm will have an effect on battery longevity.

We should not overinterpret the results that we saw. Michael Weber

Another issue “is that this algorithm results in virtually 100% RV pacing by keeping AV delays very short,” Turakhia said. “We generally try to minimize ventricular pacing except with cardiac resynchronization. A larger pivotal trial will be informative on the impact of such a strategy.”

He added that MODERATO II “certainly paves the way” for that pivotal trial.

Weber agreed, pointing out the potential impact of the BackBeat system—if it holds up to further scrutiny—is large. He pointed to numbers provided by Kuck indicating that more 1 million pacemakers are implanted around the world each year. About 70% of those patients have hypertension, and more than half of that group has uncontrolled BP despite medical treatment. That means that roughly 200,000 to 300,000 patients worldwide could be eligible for BackBeat therapy each year, Weber estimated.

He reiterated his caution when interpreting a 47-patient study. “But as a first step in a randomized controlled trial, I find it’s quite encouraging and I look forward to a pivotal study,” Weber said.